Arkins: M’s Improve, But Not Where Needed Most 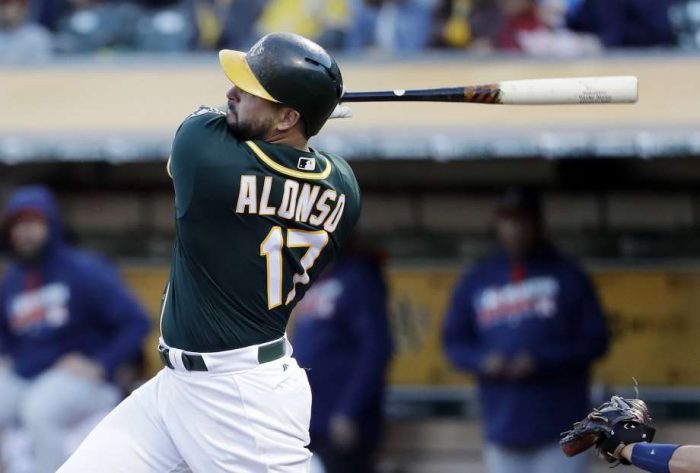 Just one day after announcing Opening Day starter Felix Hernandez was heading to the 10-day disabled, the Seattle Mariners jumped into the trade market. However, the newest Mariners won’t help the club’s battered rotation.

Instead of adding a starting pitcher, Seattle made two deals designed to improve the team’s offense and deepen its organizational depth in two critical areas going into September — bullpen and catcher.

The Mariners’ first and most notable move was acquiring first baseman Yonder Alonso from the Oakland Athletics in exchange for outfield prospect Boog Powell.

An outfielder when he debuted with the Cincinnati Reds in 2010, Alonso has been primarily a first baseman and designated hitter with Oakland. Barring unforeseen circumstances, he’ll fill the same role with the Mariners.

Alonso’s presence won’t help a starting rotation in need of help, but should improve offensive production in the middle of the Mariners’ batting order and at first base.

Entering today’s action, Seattle first baseman ranked number-14 in the American League in OPS with right-handed hitting Danny Valencia being the primary stakeholder at the position.

Here’s how the Mariners’ new first base platoon has individually performed against opposite-handed pitching and what their joint production would look like, if they had been teammates all season.

Having said that, Alonso’s production has tailed off considerably in recent months. Since the beginning of June, the University of Miami alum is slashing .249/.353/.432. Respectable production, but not at the level that earned him his first all-star selection.

Despite Alonso’s regression since Memorial Day, pairing him with Valencia makes the Mariners a better offensive club. The same isn’t true from a defensive standpoint.

Alonso’s -12 defensive runs saved (DRS) ranks last among major league first baseman this season, while Valencia’s 3 DRS places him in the top-10. Clearly, the Mariners are willing to accept a potential defensive drop-off for more run production from first base.

Financially, Alonso’s arrival won’t have a significant impact. Assuming the Mariners are paying the remainder of his salary, the club owes their newest player approximately $1.3 million.

The Mariners’ second trade involved swapping minor leaguers, but it’s a move likely to pay dividends during the last seven weeks of this season.

Seattle obtained reliever Ryan Garton and catcher Mike Marjama from the Tampa Bay Rays for infielder Luis Rengifo, pitcher Anthony Misiewicz, and a player to be named later. Both Garton and Marjama are likely to see action with the big league club after rosters expand in September.

Considering Mariners reliever David Phelps left game-one of today’s doubleheader with elbow discomfort, Garton may find himself with the big league club sooner than even Dipoto was expecting.

The 27-year-old Garton has 49.2 innings of major league experience since the beginning of last season, although he’s spent most of 2017 with Class-AAA Durham. The right-hander misses bats, but has struggled with command during his professional career.

Adding Marjama was strictly a September depth move. The 28-year-old has no big league experience, but provides the Mariners with a better option than Tuffy Gosewisch; designated for assignment today.

The most prominent of the three minor leaguers dealt by Seattle today was Powell. The 24-year-old had just 43 plate appearances with the Mariners, but was slashing .340/.416/.490 with Class-AAA Tacoma this year.

Despite his superb offensive output with Tacoma, Powell only ranked number-18 in Prospect Insider rankings released just yesterday. Complicating matters for the native Californian’s future with the Mariners; the emergence of Ben Gamel, Guillermo Heredia, and Mitch Haniger.

Obviously, today’s trades didn’t address the loss of King Felix or bolster the rotation. Nevertheless, these kind incremental improvements are necessary for a club on the fringe of contention with little margin for error.

Considering the difficulties facing contenders trying to add rotation help, Dipoto shrewdly took advantage of opportunities to improve his club in other areas. As a result, the Mariners have a better 40-man roster than they did yesterday.