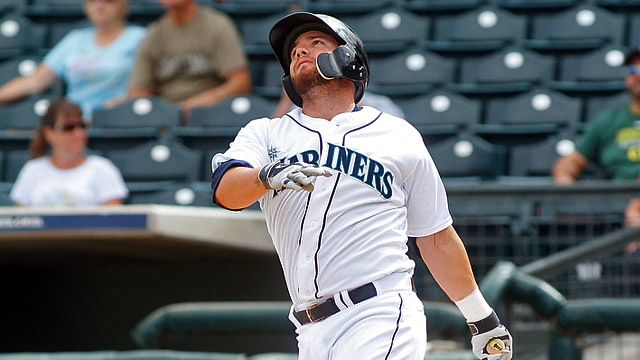 Had the club not chose to make such a move, there’s a good chance all three would have been selected.

But why these three?

The Mariners had Peterson working in the outfield this summer during batting practice and planned for him to work on it during the offseason. It’s not a good idea, but it does suggest the club still sees some potential in the bat if they’re looking for ways to get him on the field.

Peterson’s best value may ultimately be as a part-time player, perhaps at first base versus left-handed pitching where he got back to his old self, hitting more balls up the middle and the other way.

Almost all of Peterson’s extra-base power has come to his pull side. More balance there could change his profile enough to offer some hope he can play regularly. There’s still a lot of work to be done, but Peterson’s remaining potential and the fact he could be an option for the big club at some point in 2017 in some role is why he was protected.

After dealing Vidal Nuno in the trade to acquire catcher Carlos Ruiz from the Los Angeles Dodgers and losing David Rollins via waivers, the 24-year-old Fry became a more necessary depth move, even with the acquisition of James Pazos.

The club is likely to seek a veteran lefty still, but Fry threw the ball very well in Triple-A Tacoma, striking out 31 percent of left-handed batters he faced with an improved breaking ball and more consistent release point with his fastball.

Fry touches 94 on occasion, but he pitches with deception and his slurvy breaking ball was sharper in August. He may be ready for a big-league test in 2017.

Vieiera showed promise as a starter in 2013 in Everett but had trouble getting ahead in counts and putting hitters away when he did. The club moved him into the bullpen in 2013 and things got worse.

Multiple mechanical adjustments later — including concerted efforts by his lower and upper halves and a more aggressive arm action — and not only is the 6-foot-2, 215-pound Vieiera throwing a lot more strikes, but he’s getting a little more arm side run on his fastball. The 23-year-old is also getting more consistent break on his upper-70s curveball

There’s some rock-and-fire to his delivery but when his arm is on time he catches the zone enough and batters don’t pick up the ball early..

Vieiera, however, regularly topped 100 mph on the radar gun during the season and scouts clocked him at 99-104 in the Arizona Fall League. The team also credits Vieiera being in the best shape he’s been in since signing in 2010.

Expect Vieiera to start 2017 in Double-A Arkansas with a chance to move quickly if he continues to pound the strike zone and find a way to continue to add movement to his heater. He’s not Edwin Diaz, who had a better breaking ball and fastball command at this time a year ago, but he throws harder and is trending up in a big way.

2016-11-18
Previous Post: Time for Mariners to Act the Part
Next Post: Could Mike Napoli Help The Mariners?