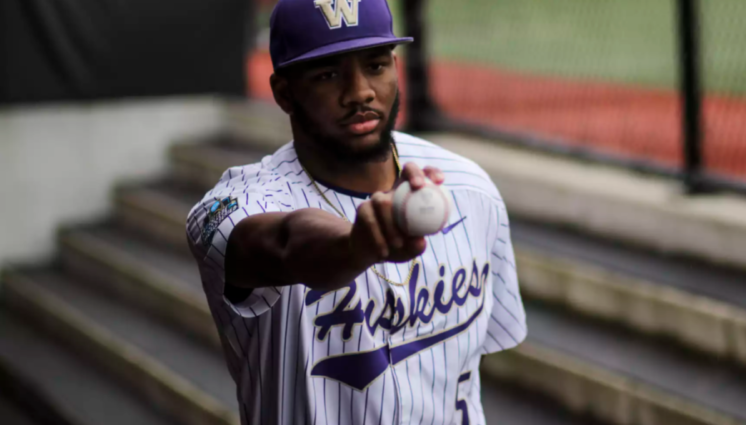 A year ago I was prepping for the 2018 college baseball season wondering if the Washington Huskies could get back to the postseason.

Friday, the media met with head coach Lindsay Meggs and not only was the conversation different, after the program reached the College World Series for the first time ever, but the tone Meggs took in discussing the state of his program, including how success has impacted recruiting.

“Our goal is to try to keep the best players in Seattle and the state of Washington at our place, and that’s a challenge because of all the talented schools in the northwest,” Meggs said.

“People are coming in here from all over the country trying to find players. The more success we have here, obviously it translates more with the local kids, and we don’t feel like we can play at the national level unless we recruit nationally, but we have to do a great job at home first.”

This year’s team has 17 players from the state of Washington, 13 from California, one from both Arizona and Oregon and three British Columbia.

This is Meggs’ 10th season leading the Dawgs and the arrows are certainly pointing in the right direction. More consistency on the upper end may be the next step. The Huskies have made the postseason three times (’14, ’16, ’18) but have yet to do it twicein a row and the steps back both times have been rather significant.

Meggs, who received another contract extension this offseason keeping him on Montlake through the 2025 season, made one significant change to his coaching staff heading into 2019.  Former Seattle Mariners’ 10th-round Draft Pick Ronnie Prettyman has joined the staff, replacing Donegal Fergus, who left to become the associate head coach at UC Santa Barbara.

The Huskies, despite officially bring ‘back’ 22 players from last year’s roster, are a relatively young team, with just two seniors — Joe Wainhouse, Mason Cerrillo — but they do get a lot of leadership back with those two, plus junior catcher Nick Kahle. And calling last year’s top freshman, Braiden Ward, inexperienced is just ridiculous, so there’s that.

Jones is an athletic pitchability arm, mixing speeds, movement and location to avoid the barrel and in 19 games a year ago — 18 starts — he did that quite well, posting a 3.98 ERA over 104 innings. He walked just 19 batters and struck out 83.

Burgmann pitched almost exclusively in relief last season — he had Tommy John a year and a half ago — covering 31 frames, but will make the move to the rotation this spring.

He can get his fastball up to 94 mph, pitching comfortable in the 89-92 range. How well he can emulate Jones’ ability to keep hitters off the fastball could be the key for his transition into a starting role.

Emanuels, also a reliever a year ago, may remain one this season, but he’s up to 95 mph with what Meggs called a “really improved breaking ball.”  If I had to guess, Emanuels is a high-leverage reliever, perhaps the closer.

DeCooman is deceptive, mixes in an 84-87 mph fastball with plus command and a little life up in the zone, and two offspeed pitches, including an average slurve and a useful changeup.

I’d give the clear edge to Jones in terms of who begins the season as the ‘Friday’ starter, based off his big-game performances from last season and three years of experience. Jones, a Kentwood High School product, started 10 games for the Huskies as a freshman.

Meggs noted Wainhouse could get additional time on the mound this year. He’s hit the mid-90s from the bump and throws an easy 93 mph with life.

With Wainhouse anchoring the lineup, there’s a lot to like about  the Dawgs offensuively this season.

Jones has more power than his .378 slugging percentage and 12 extra-base hits suggest, which may be where Jones improves the most this season.

Unfortunately, Jones will miss the first part of the season with an injury to his thumb that required surgery. Meggs expects him back for the Pac-12 schedule.

A new middle infield is necessary, with Noah Hsue and Ramon Bramasco the leading candidates to fill those voids. Yes, Hsue really is just 5-foot-4, but he’s a lefty bat with a compact swing and enough bat speed to spray line drives and he’s got terrific foot speed and technique up the middle.

Nick Roberts, a junior from Silverdale’s Central Kitsap High School, also could be in the mix.

It seems Wainhouse and Jonathan Schiffer will share time at 1B and DH. Ben Baird will be the third baseman.

Ward, Cerillo and Jones are the outfielders

The season kicks off at UC Irvine February 15. The first game at Husky Ballpark is a week later, February 22, versus Northern Colorado.

Pac-12 plays for the Dawgs opensin Eugene versus the Ducks Mach 15. The first home game in the conference is March 22 versus USC.

Games to look forward to, for me, include the home series versus defending national champion Oregon State March 29-31. Beavers’ star Adley Rutschman is likely a Top 10 pick in MLB Draft come june.