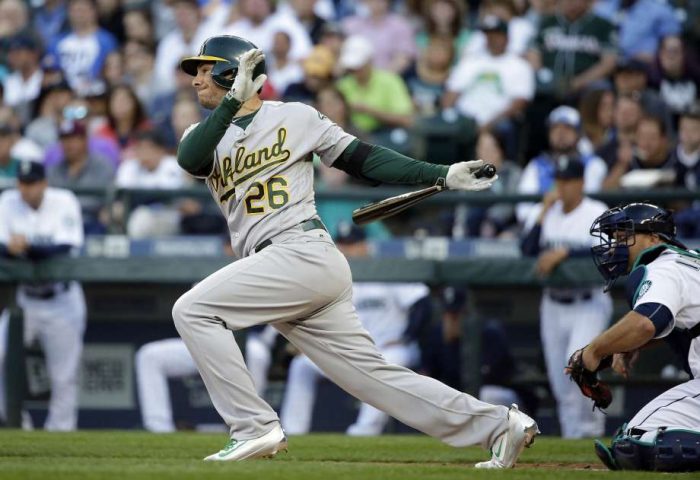 Apparently, striking early is Jerry Dipoto’s preferred method of operation during the offseason. Today, the Seattle Mariners’ general manager reinforced that perception by making his second trade since the conclusion of the World Series less than two weeks ago. This time, he acquired Danny Valencia from the Oakland Athletics in exchange for minor league pitcher Paul Blackburn.

Adding a right-handed bat to complement Vogelbach was an offseason priority for Seattle.  Just four days ago, Dipoto expressed that sentiment when he told Seattle Times beat writer Ryan Divish “We do want to give an opportunity for Dan Vogelbach to play, but he’s going to need some help there.” In Valencia, the Mariners found their man.

The deal also permits the Mariners become less platoon-centric, which was an offseason goal for Dipoto. Valencia is capable of playing at both corners of the infield and the outfield. Moreover, he has a proven record of reaching base with a .334 on-base percentage (OBP) since the start of the 2014 season. A quick comparison of the right-hander’s offensive production to Seattle’s 2016 first basemen illustrate that he could represent a significant upgrade at first base, depending on how often he mans the position.

To a degree, the newest Mariner was a journeyman player until last season with Oakland. He appeared in 130 games — his most since 2011 when he was in 154 games with the Minnesota Twins. Valencia turned a corner when with the Toronto Blue Jays prior to his arrival in Oakland. He’s frequently credited his time with Jose Bautista, Edwin Encarnacion, and Josh Donaldson as instructional and career changing.

Unfortunately, for the Athletics and Valencia, a clubhouse incident overshadowed his 2016 on-field performance. The 32-year-old was involved in an altercation with teammate Billy Butler that resulted in Butler’s assignment to the seven-day concussion list. Oakland released Butler a month later and most observers didn’t expect Valencia to be back with the Athletics next season.

The arrival of Valencia likely signals the end of Franklin Gutierrez era in Seattle. Defensively, the seven-year veteran profiles similarly to the 2016 version of “Guti.” Currently a free agent, Gutierrez’s main value to the 2016 Mariners was his ability to rake against left-handed pitching, which was formidable.

Having said that, Valencia is also a strong performer against southpaws, he can play multiple positions, and performs much better against right-handed pitching than the player once named “Death to Flying Things” by the late, great Dave Niehaus. Here’s a look at their platoon splits.

Another roster casualty is Dae-Ho Lee. Also a free agent, the 34-year-old has expressed interest in returning to Seattle. But, he reiterated to the Korean media that receiving more playing time than last season was a higher priority. The addition of Valencia and the club’s commitment to Vogelbach means Lee will be playing somewhere other than the Emerald City in 2017.

Considering that, Seattle committed $9 million to the platoon of Adam Lind and Lee last season, the club actually saves approximately $3 million at first base in 2017. Valencia is in his third year and final year of arbitration eligibility and projects to make $5.3 million, according to MLB Trade Rumors. Vogelbach will be near the major league minimum, which was $507.5 thousand last season.

By dealing Valencia instead of potentially non-tendering him, the Athletics pick up a minor leaguer who may be with the big league club by late next season. Blackburn — ranked number-18 in the Mariners’ system by MLB.com — could be a contributor in Oakland’s bullpen or the back of their rotation.

From Seattle’s perspective, giving up the 22-year-old for Valencia makes sense. They’re a club that wants to contend next season. With their newest contributor eligible for free agency after next season, the club hasn’t made a long-term commitment to a thirty-something player and can turn over first base to Vogelbach in 2018 — if he progresses as well as Dipoto expects.

In retrospect, the Mariners now have Vogelbach and Valencia — both targeted as 25-man roster players — thanks to the deadline deal that sent Mike Montgomery to the Chicago Cubs. This should be a lesson to all who criticize trades in the weeks and months afterwards. As with most deals, it can take years to determine the winner or loser.

Although Valencia will contribute in the outfield, he doesn’t satisfy the club’s need to add a full-time corner outfielder. As it stands right now, the top candidates to play in left and right field are Seth Smith, Nelson Cruz, Ben Gamel, and Guillermo Heredia.

Smith is essentially a platoon player with below average defensive skills, Cruz should be a full-time designated hitter, and the pair of Gamel and Heredia are excellent defenders, but unproven against major league pitching. Both could still turn out to be nothing more than a fourth outfielder.

Finding that corner outfielder will happen later. But, today, the Mariners improved at first base, added versatility, and found an everyday player at the same time. Getting all that for a Class-AA pitcher who projects as a back of the rotation type was a good move by Dipoto.

Veteran’s Day was just yesterday and Dipoto has already significantly improved his bench and his roster’s flexibility. Imagine what he’ll accomplish by Thanksgiving Day.