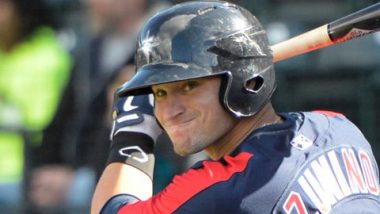 Mike Zunino was optioned to Triple-A Tacoma last summer after struggling somewhat historically in the big leagues for four months. He hit the ball well in the Pacific Coast League for a month, showed positive results in spring training last month and now is off to a roaring start with the Rainiers in 2016 — .415/.439/.868, 3-2B, 7 HR, 3 BB, 9 SO in 13 games.

But numbers aren’t what’s necessary for Zunino to earn his way back to Seattle at some point. It’s all about the process. Some of the adjustments are mechanical, some are mental. Fans may want to see a ‘new’ Mike Zunino, but they aren’t going to get that, at least not according to Zunino. The prized catcher says is going back in time to help him right the ship. But make no mistake about it, there are some ‘new’ concepts to the adjustments that may just unlock more of his potential as a hitter.

“(I’m) actually going back to stuff that I did more so in college and my first year and a half in pro ball,” Zunino said Saturday from Cheney Stadium. “Getting back to trusting what I was doing, trusting that my mechanics were fine and using the same approach I had at the plate, knowing that for better or worse it’s going to help me more times than not.”  What Zunino does well from a tools and raw ability standpoint is generate leverage and loft thanks to a power swing path and solid-average bat speed. The swing, when he’s right, is short to the ball. So why all the chasing of breaking balls?

“When you’re clouded mentally and not sticking to your approach,” Zunino explained, “the only thing you’re going to be able to do is rush, and a lot of times when you rush it looks like you’re trying to pull the ball. That’s not something I’ve ever tried to do consciously.”

Zunino is known for being intelligent beyond his 24 years and for having a good baseball IQ. That certainly is apparent in talking to the former No. 3 pick, and always has been. But as a hitter, does he know what kind of swing works in big-league baseball? Does he know his swing?

Before we get to what Zunino said about his swing here is what Edgar Martinez said to me last spring, just months before the club named him the big-league hitting coach.

“Where your bat goes, where you put the head of the bat, that is where the ball will go in batting practice. But in real games you aren’t going to the pitches right down the middle of the plate very much so the barrel has to get to the pitches wherever on, or around, the plate it’s headed. We want these guys to find that contact point all over the strike zone, but let the pitch, the pitch location, determine where the ball is hit.”

“Your swing dictates where you hit the ball, it’s just a contact point,” Zunino said. “I know if I (stick to my) approach, (I’m) going to hit balls to right, center, left, dictated by the pitch.”

Sound at all familiar?

While Zunino speaks of being “clouded” after struggling for a period of time, suggesting it became a mental struggle to some level, the details of that are even more interesting. His wording is a bit conversational, but stay with me here.

“Going up there, you know, instead of feeling like those weren’t my at-bats, now I’m staying with my approach.”

Zunino also added: “When you’re trying to help the team somehow, you know, instead of going 0-for-4… I’ve tried to chase hits before, tried to chase RBI, it just sort of spirals you down. You only can take what he game’s giving you.”

Such comments make it clear he indeed was pressing, which took him away from what he’s good at and down a forced path of attempting to do too much, and by ways he’d not been successful in the past. It’s also clear Zunino’s mind is more at ease, with clarity now, with a goal to stay the course on who he is as a hitter rather than pushing to be, say, Nelson Cruz or someone else on the team that’s successful.

Zunino set no goal for a return to the majors, nor statistical goals, or anything beyond his focus to remain Mike Zunino and only Mike Zunino. Why not? “Because when you set goals like that, you can become focused on that rather than the next pitch.”

Zunino’s handling of his struggles is new to him; he raked his way to Gainesville, starred at the University of Florida, was the No. 3 pick in the 2012 Draft, lit up the short-season Northwest League that same year, skipped Class-A Clinton and Advanced-A ball, lit up the Southern League for a short time — still in his Draft year — and had fewer than 250 plate appearances at Triple-A before the Mariners called him up to the majors. In terms of fixing his own struggles, he wasn’t able to do that a year ago.  I asked him how might he deal with that differently once a 3-week period occurs — and it will — when he doesn’t hit.

The club’s all-time single-season home run leader for a catcher said it’s about not trying to please everybody or do what others are doing that is working for them.

Sounds like a lot of help was coming in and Zunino tried to use a lot of it, if not all of it.

Not all of Zunino’s adjustments since last summer have been mental, however. As I have stated before, his mechanics show favoring his pull side, whether that’s conscious to him or not, and his upper body fell extremely robotic in his upper half, something scouts term as ‘rotational.’ It means the swing isn’t a full-body force anymore, it’s the hands and arms dragging the hips, waist and upper body into a circular-style motion. These kinds of mechanical flares cause issues such as plate coverage, both horizontal and vertical, susceptibility to even average velocity, removing contact capabilities and even power on most pitch types and locations. Zunino recognizes that, too, among the task of handling the pitching staff being a backstop’s No. 1 job. Completely unsolicited, the catcher noted:

“Does it give you the short end of the stick sometimes? Maybe, but I’ve always done a pretty good job of separating the two, but I did go back and put a lot of focus on my at-bats this offseason, and I’ve done that more years than not, so it was pretty easy to convert back to it.

“I’ve tried to clean up my (swing) load, I’ve gone back to more of a lower-body load I used in college” Zunino said. Load is mostly in the hands, sometimes moving back or even vertically in both directions to help a batter generate more strength in the swing, in hopes bat speed and leverage is the result.  Using the lower half to help here also aids a hitter’s ability to maintain a more compact swing, yet still create the power. A more useful lower half could help Zunino cover the plate better, too.

“With my upper body I’m focused on not getting too rotational, Zunino added.”

There’s that term again. I never mentioned it to him, I simply asked about any mechanical adjustments he’s made, and he noted immediately the lower-body load and being too rotational. Sounds like a good place to start, particularly when some of his issues compounded due to a mental lapse in what sounds like a loss in identity.

Whatever he’s doing there is working in the minors thus far. We’ll see how he handles the first prolonged slump, and over the next several weeks I’ll be looking for mechanical differences between now and last season. The one thing I noticed on Opening Night was more athleticism in his knees and feet during his at-bats, and a bit more of an open stance. It appears he’s stayed with that, and the small-sample, minor-league results are all positive.