The Mariners and a six-man rotation 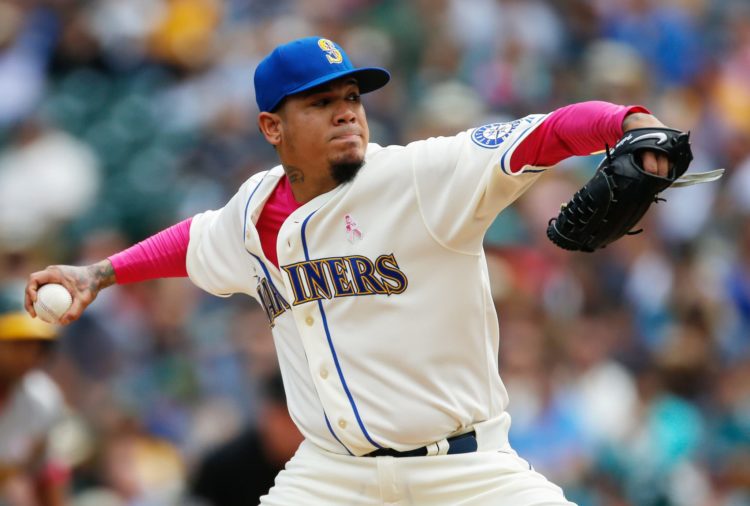 The Super Bowl is over and there’s less than two weeks until pitchers and catchers from the Seattle Mariners report to Peoria Sports Complex in sunny and warm Arizona. Needless to say, I’m eagerly awaiting the upcoming baseball season. If you’re reading this post, you probably feel the same way.

You may be anxious like me to get the season going, but you’re probably not as fixated about the idea of the Mariners using a six-man rotation in 2016. No, you haven’t missed any breaking news from one of the outstanding beat writers who cover this ball club on a year-round basis. To the best of my knowledge, there hasn’t even been a hint from team management that they’re entertaining the idea.

Unfortunately, the concept of the Mariners employing a full-time sixth starter is embedded in my brain for some irrational reason. Hopefully, whatever is affecting me isn’t contagious.

I first exhibited signs of this sixth-man fixation syndrome last July when the club’s season was unraveling and their young arms were on pace to run out of innings. At the time, I proposed numerous scenarios and strategies that would help the team navigate the remainder of the season. All of my hair-brained schemes included the use of a sixth starting pitcher.

In retrospect, the idea didn’t make sense. Especially after the team traded J.A. Happ to the Pittsburgh Pirates at the non-waiver trading deadline and Paxton encountered a recurrence of issues with the index finger on his pitching hand. Despite the fact that I debunked my own proposal of using an added starter, I’m at it again.

To be honest, I have a hard time envisioning a scenario that would require the Mariners using a full-time six-man rotation this season, but a lot’s changed with the organization since last season and I keep thinking about it. So, I’ve opted to re-explore the concept one more time to see if it makes sense in 2016 and, hopefully, end my fascination with this topic once and for all.

Protecting our young
Perhaps, the fact that the Mariners have so many inexperienced starters among rotation candidates is why I have sixth starter on the brain. After all, using an additional rotation piece  could help reduce the burden on a club’s younger arms.

How much could you reduce the workload? It depends on the methodology. Assuming an extra starter was used on a full-time basis for the entire season, each pitcher’s workload would be decreased by approximately six starts and 30-40 innings. That could be appealing since Walker, Karns, Paxton, and Montgomery are still in the developmental stages of their respective careers. Maybe I’m not sick after all. Maybe I’m the only sane person on the internet. We’ll see.

Let’s take a look at the 2015 production and the career-highs for the Mariners’ least experienced starters. Perhaps, that will help shed light on whether the club would benefit from an extra starter.

At first blush, it does appear that the Mariners could benefit from having a supplemental starter. Walker, Montgomery, and Karns are coming off their first full season in the majors and each faced challenges last year. The club was forced to “shut down” both Walker and Montgomery before the season concluded when they reached a club-imposed innings limit.

On the injury front, the Tampa Bay Rays ended Karns’ season in early September due to a forearm strain and repeated trips to the disabled list have undercut Paxton’s availability during the last two seasons.

Managing the quartet’s workload going into 2016 will certainly be a priority for the Mariners going into 2016. But, does it require a six-man rotation? The answer to that question depends on each pitcher’s expected innings limit for the upcoming season.

Projecting workload
Last year, the old regime permitted Walker to go 49 additional innings past his 2014 tally. That translates to a 29-percent increase from one year to the next. Since there’s a new management team in place, we don’t know how the Mariners plan to regulate the utilization of their developing arms. If team leadership only knew how much sleep I’ve lost over this subject, they might share their plans with me.

Since the Mariners aren’t likely to divulge their strategy with me during the current century, I’ve opted to use a projection system that rivals anything that might be found at FanGraphs – I added 30 innings to each starter’s 2016 totals, which equates to an increase between 18 and 29-percent for each hurler.

Yes, I know. My “advanced” computations probably won’t lead to a Nobel Prize nomination for mathematics. But, I’m not trying to predict the future. I just want to get a ballpark figure on what to expect from these four young pitchers.

Assuming that each pitcher averages at least six innings per-start, they’d reach the 180-inning mark after 30 starts. At that point, Karns and Montgomery would be in the neighborhood of their “Arkins limit.” Naming a hypothetical limit after myself is an obvious sign that I’m either close to going over the edge of sanity or I write about baseball for Sports Illustrated. Okay, back to my folly.

Based on the limits I’ve “imposed,” Walker would still have tread remaining on his tires by the end of the season. That’s a good thing, especially if the 23-year-old ascends to the next level in 2016 and becomes a future ace. If the right-hander does elevate his performance, he’d likely be in the Felix/Iwakuma territory of averaging 6.5 innings per-start. That would put him in the neighborhood of the 199-inning limit listed above.

The pitcher who may not be permitted to reach 180 innings would be Paxton, who’s suffered injuries during the last two years and has never pitched more than 145 innings in any season during his professional career.

After looking at the data, I don’t see a compelling case to use a six-man rotation solely for the purpose of managing the workload of the younger starters. If the Mariners are able to get 30 starts from both Walker and a combination of the rest, the club is probably having a very good season. That’s assuming the Felix, Kuma, and Miley are healthy and performing as expected.

Even if a six-man rotation was needed to preserve young arms, there’s a factor that would likely preempt using such a strategy – on-field value.

An undeniable cost
Using a full-time sixth starter would lead to Seattle getting approximately 26-27 starts from Hernandez, rather than his typical 31-34. Would be resting “King Felix” really be worth it?

Even my clouded mind can come to the conclusion of “no.” A quick review of the following Steamer projections for the Mariners found at FanGraphs suddenly makes a full-time six-man rotation far less appealing.

By going to Felix, Kuma, Miley, and Walker less often, the Mariners would be counting on back-of-the-rotation types to deliver more value. I doubt that I could find anyone in the Pacific Northwest who believes that the club would better positioned to compete by having less of their top-four starters and more of Karns, Paxton, Montgomery, Vidal Nuno, and Joe Wieland.

Preserve the King?
I’ve often read and heard that Felix “wears down” at the end of seasons, although my eyeballs don’t see it the same way. If this perception was accurate, one could make a case that using a six-man rotation would have merit. At this point, this is my last best chance of proving to myself that I’m not needlessly fixating on this topic.

When I look at Hernandez’s career monthly splits, it’s easy to understand how a casual onlooker could come to the conclusion that the 29-year-old loses steam at the end of the season. However, he hasn’t exactly “stunk up the joint” during September/October when his statistics are very similar to his career performance in each category.

Perhaps, the notion that Felix falls apart in September is fueled by several bad outings rather than the totality of his performances. With the exception of 2011 and 2012, he’s actually done quite well during the last month of each season since 2009. As you can see below, the right-hander experienced a “bounce back” during the past three Septembers.

I could see how some observers might associate Hernandez’s 2013 improvement with pitching his fewest innings since 2008. But, that logic doesn’t add up. If a lighter workload was the key for a better Felix, how can 2014 be explained when he pitched extremely well late in the season and finished a close second place in American Cy Young award voting?

For anyone who believes that fewer regular starts for Felix would lead to a better rested ace for the postseason, I’d agree that he’d be more refreshed in October. But, there’s a better chance that he’ll be sitting his “fresh” body on the couch instead of standing on the mound at Safeco Field. Honestly, does anyone realistically expect this version of the Mariners reaching the playoffs without 30 or more starts from Felix?

Finally
Okay, I think I’m finally over my six-man rotation obsession. As they’re currently configured, the Mariners project to be on the fringe of contention in 2016 and may need to compete until the very last day of the season in order to make the postseason. With an outlook like that, the club will need more of Hernandez, Iwakuma, Miley, and Walker – not less.

Still, Seattle will need to strike a balance to have success during the upcoming season. The team has only two proven workhorses on its roster – Hernandez and Miley. Plus, Iwakuma is entering his age-35 season and has only pitched more than 200 innings only three times during 15 professional seasons; once during his four years with the Mariners. After that, it’s Walker – who may be on the verge of taking the next step in his progression – and the rest of the gang.

Strategically using a sixth starter during the course of the season may be the best approach for the Mariners. This methodology could include exploiting off-days and shuttling an extra starter between Tacoma and the big league club, when needed.

Retaining a pitcher – like Montgomery or Nuno – who could be utilized out of the bullpen or as a spot starter would achieve the same goal. Using either the shuttle or reliever/starter approach would help the Mariners keep pitchers fresh while maximizing the value of the club’s best starters. These are far more realistic strategies than a full-time six-man rotation.

Alright, I think that I’ve got this “six-man thing” out of my system for good. Now, I’m left with only one Mariners-related obsession – who’s going to be the Mariners’ right-handed back-up first baseman? I may be beyond help.