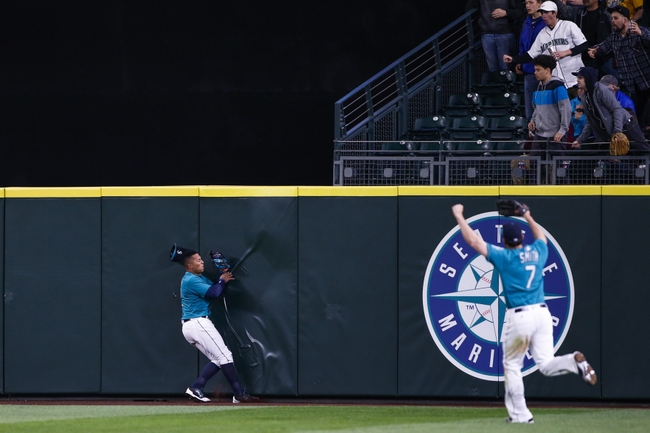 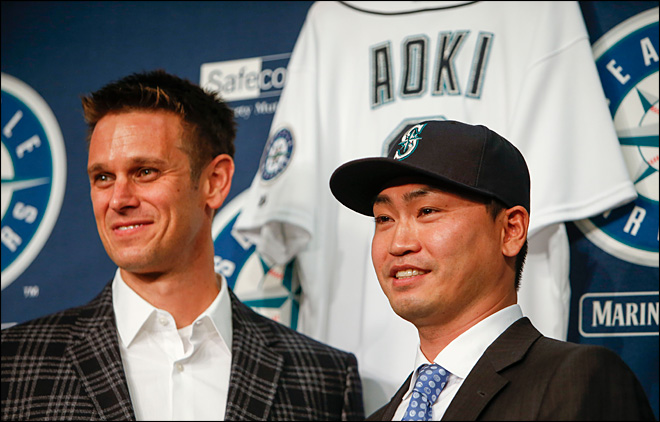 The 2014 season for Jesus Montero could be best described in one word: forgettable. Between the rough Spring Training entrance to the ice cream sandwich related exit, it couldn’t have gotten much worse. It couldn’t have, if his 2013 season didn’t involve a PED suspension, injuries, losing a starting job and being sent down to the minors. But all that appears to be in the past for the former top prospect, we hope. Montero impressed his superiors by showing up to camp this spring in excellent shape and reportedly losing the 40 pounds he was supposed to the previous year. It was going to take an extraordinary showing during Cactus League games to get the right-hander into the Opening Day roster, though, if that was even being considered by management. It didn’t help Montero’s case that the Seattle Mariners beefed up the right-handed side of the lineup with free agent acquisitions of Nelson Cruz and Rickie Weeks. The pair were expected to take up the DH at-bats with Weeks seeing regular time in left field. Of course, things didn’t quite go that smoothly as Weeks struggled with the transition to part-time outfielder and was released while Cruz became the mostly-regular right fielder. But with Logan Morrison at first and Willie Bloomquist under contract, Montero still found himself on the outside looking in from the get-go. And so, with a change in attitude, and pant size, Montero began the 2015 season with the Tacoma Rainiers and immediately began to hit. The right-hander posted a 126 wRC+ for the month of April. May was a little less productive with an 89 wRC+, but he did double his home run total on the year to six. Montero then exploded for a 153 wRC+ and .950 OPS in June. At the time of his call-up he held a .332/.370/.529 slash line. Mike Curto, the Rainiers play-by-play announcer, detailed Montero’s season to date and dispelled several of the perceptions that surround the slugger’s improvement. No, the 25-year-old is not directly benefiting from hitter-friendly road parks. Neither is he only pummeling left-handed pitching. It appears that what we are seeing is Montero finally making adjustments as the season goes on. One particular portion from Curto’s piece stood out: “If you are a scout and you saw Tacoma for five days, June 21-26, you would have seen Montero go 3-for-24 with 10 strikeouts, swinging and missing at pitches low-and-away from right-handers. If you saw Montero this past week, you would have seen him lay off those pitches and get ahead in the count.” Sluggers can be streaky players. Look no further than Nelson Cruz or Mark Trumbo, as PI’s Luke Arkins recently examined. More often than not, over the course of a full season these types of streaks will even themselves out and we get a better picture to look at. With the adjustments, Montero has managed to improved his ability to hit for contact and it resulted in him leading the Pacific Coast League in hits with 115 before his re-call. He’s more or less been able to maintain the power numbers he produced in 2014 only with fewer doubles and more triples — imagine that. His .370 BABIP suggests he’s had some help in piling up the singles but it’s unfair to discredit the adjustments he’s made in favor of luck. At the same time, we are talking about a guy who has over 1500 plate appearances at Triple-A and he wouldn’t be the first to have solved PCL pitching while not succeeding in the majors. Alas, Montero is now 25. He is no longer riding the top prospect tag. The Mariners were kind enough to comment that, entering Spring Training, expectations for Montero were non-existent. And truthfully, he has done just about everything possible to sabotage what projected to be a solid major league career. Seattle wouldn’t be the first team to give up on a player that didn’t seem to care enough about his on-field success. With a strong first half performance, and a struggling Mariner offense, Montero finds himself on the big league squad. It could, and probably will, be short-lived as the club will need to make roster room for starter J.A. Happ who was optioned to High-A in order to make room for the right-handed bat. Dustin Ackley has been heating up and is unlikely to be the odd man out. It also doesn’t sound like the club is unhappy with the performance of Franklin Gutierrez either. I’m not going to advocate dumping a particular player in order to make room for Montero. The club has done well to move on from Bloomquist and Weeks, and while many have been calling for Ackley’s dismissal, his ability to play center field is needed with the uncertainty surrounding Austin Jackson. We knew that Montero was talented, it was just a matter of whether or not he was willing to put it to work. It appears that he has and the Mariners — or another team — need to give him that chance at the big league level. Picking up a single and a walk in nine plate appearances is not going to cut it for Montero, but he is going to need more than three games to prove himself in the majors. END_OF_DOCUMENT_TOKEN_TO_BE_REPLACED

At this time last season Stefen Romero found himself as a regular in the Seattle Mariners lineup. In a similarly timed late-May weekend series against the Houston Astros in 2014, he started all four games at designated hitter, picking up two singles and three walks in 16 plate appearances. Not a terrible performance, but perhaps indicative of how the season would end up going for him: not enough performance with the bat. Prior to cracking the M’s Opening Day roster out of Spring Training last year, Romero’s bat was described as major league ready. The 26-year-old posted a .277/.331/.448 slash line in 411 plate appearances at Triple-A in 2013, his only action above Double-A. At the conclusion of that season the right-hander had amassed approximately 1500 minor league plate appearances so it’s fair to suggest that he was very close to being ready for the show, if not already so. As we all have seen, Triple-A performance doesn’t always translate to MLB performance. Romero produced a dismal .192/.234/.299 slash line with a 51 wRC+ in 190 plate appearances at the major league level in 2014. The right-hander was clearly in over his head but wasn’t sent down to Triple-A until the end of June. This was largely because the Mariners simply didn’t have anyone else, sans Endy Chavez, to employ in right field with Michael Saunders on the disabled list. Romero would be re-called for another stint but sent back down after Seattle acquired Austin Jackson and Chris Denorfia at the trade deadline. So far in 2015 the story hasn’t been negative for Romero, who started the season with the Tacoma Rainiers and has stayed there to this point. But it hasn’t exactly stood out, either. The right-hander played in 36 games and had 163 plate appearances at Triple-A in 2014. Entering play on Saturday, Romero has played in 37 games, collecting 164 plate appearances. There are similarly sized samples that we can compare, and here is a look at the right-hander’s performance over those periods. The positive here is that Romero has managed to increase his walk rate slightly. The downside is that his entire slash line has taken a major hit. The isolated power and slugging percentage numbers are down almost entirely because he’s hit a third fewer home runs in 2015 — he’s hit one more double this year compared to last and an equal number of triples. Sure, the sample size is far too small to make a judgment about Romero’s 2015 season and future, but it would be far more encouraging to see him equal or better the numbers he was posting in Triple-A last season. So far he’s merely been good, and being good at Triple-A isn’t going to earn you a spot on the big league roster, particularly when there are far more options to select from. This is not to be overly critical of Romero. At 26 he’s considered younger as opposed to young, and after a dismal first big league season the prospect tag has more or less disappeared — he eclipsed the 130 plate appearance plateau in 2014, using up his rookie status as well. There are countless examples of late bloomers, however, and Romero could well have major league success in his future if he is given the opportunity. The problem is finding him that opportunity. Between Seth Smith, Justin Ruggiano, Dustin Ackley, Willie Bloomquist, Rickie Weeks and Nelson Cruz there aren’t many outfield at bats available at the moment. Factor in that Brad Miller is starting his transition to the outfield and Austin Jackson nearing a return and there’s simply no room. Barring a sequence of injuries, Romero’s quest for a return to the big leagues this year is simple: force the Mariners hand with performance. So far he hasn’t done that yet. There’s also too many guaranteed contracts in the way for Seattle to simply make a change for the sake of change. Projecting a role for Romero on the 2016 club is probably as simple as assuming there won’t be one, though that may not be the case. Weeks, Jackson and Bloomquist are all free agents after this season and it could be the end of the line for Ackley, too. That leaves Cruz, who at most is a part-time outfielder, the platoon of Smith and Ruggiano and whatever becomes of Miller. There definitely could be room for another outfielder. An interesting note regarding Romero is that this past week on Tuesday he made his first career start at first base. He’s primarily played the corner outfield spots but does have some experience at third base to his credit. Seattle has Logan Morrison under club control for 2016 before he’ll be eligible for free agency and realistically, Romero will have to find a way to provide more power than his skill set currently holds to make it as an average major league first baseman. One scenario for Romero is that he finds himself with a different organization for next season, perhaps as an added piece in a significant trade for a premium bat or starting pitcher. At the end of the day, Romero has the tools to potentially become a fringy major leaguer who lives above replacement level. It’s just a matter of whether or not he will be able to do it with the Mariners or somewhere else. There’s no reason for the Mariners to even think about giving up on Romero in 2015 seeing as he is playing quite well and offers depth with some major league experience. And as the usual, annoying caveat, it’s still only May. Talk to me in July and we’ll reassess Romero’s production and role in the organization. Right now, there isn’t enough reason to be concerned. Romero hasn’t played well enough to earn a spot in the majors, but he hasn’t been struggling at Triple-A either. So for now and the foreseeable future, he’ll stay in Tacoma. END_OF_DOCUMENT_TOKEN_TO_BE_REPLACED

In this week’s episode of The OFP Report, Jason A. Churchill, Alex Carson and Brendan Gawlowski discuss the bullpen of the Seattle Mariners whether or not it’s too early to get aggressive on the trade market and the Man In The Box is Logan Morrison (22:38), whose recent streak begs the question of what may or may not be realistic for the first baseman moving forward. The guys also name The OFP Report’s Player of the Week (51:16) and offer their thoughts for the rest of the Mariners’ homestand, as well as T Bag (24:42) and some notes on This Day in Mariners history (45:18). Listen here or Download: iTunes | TuneIn | Stitcher END_OF_DOCUMENT_TOKEN_TO_BE_REPLACED