Seattle’s Baseball Treasure, Past and Present 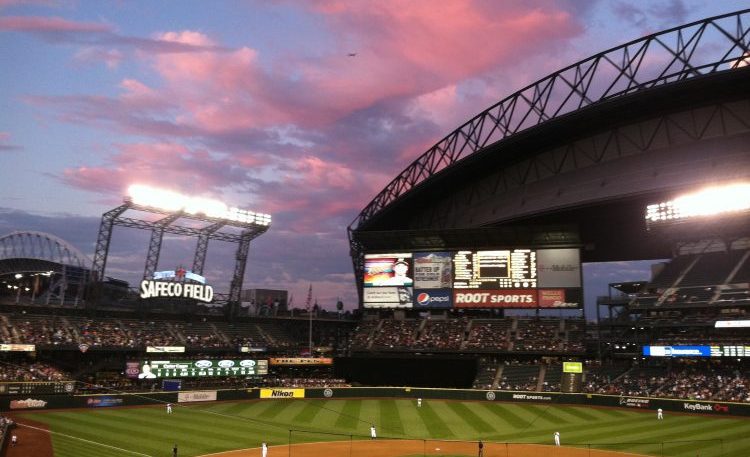 I originally wrote this in October, 2005 (which will explain some of the time frames and years not adding up here in 2017).

I read recently that Los Angeles Dodgers play-by-play announcer Vin Scully has been with the club for 56 years. Now, I knew he’d been around forever, but, wow. Since the age of 21, he’s been in the booth doing some form of radio or television work for the Dodgers. Fifty-six years! That’s longer than my father has been alive, and a lot longer than the Seattle Mariners have existed.

Scully’s talents, while well-documented and highly regarded by millions across the country, appear to be somewhat unappreciated by the Pacific Northwest region. Not that the Seattle area doesn’t think greatly of the Hall of Fame broadcaster, but since the late 80s, Scully isn’t heard in these parts anymore.

Fellow game caller Jon Miller, ESPN’s top play-by-play man and the voice of the San Francisco Giants, thinks Scully is the top man in the league – still – and sees no reason why the 77-year-old should retire anytime soon. “He’s the best there ever was,” Miller told ESPN. “You can’t walk away from it when you’re the best there ever was.”

Scully has witnessed, first-hand, the days of Sandy Koufax and Don Drysdale, to the years with Tommy Lasorda, Fernando Valenzuela to Orel Hershiser to Eric Gagne.

Scully has seen six World Series titles, several disappointing seasons, eight managers, four MVP winners and three Cy Young winners in his tenure with the Dodgers. He’s seen it all, but even though he’s on a lighter schedule than years ago, he’s still going strong. Anyone who witnessed the 1988 World Series remembers the instantly classic Scully’s call became.

“The sound of his voice is like the sound of your dad coming home and throwing his keys on the kitchen table,” actor and long-time Dodgers fan Robert Wuhl told ESPN The Magazine. “It’s the sound of security and comfort for so many of us.”

Even without the constant joy of Scully on the air, since 1977 the Seattle Mariners have had a similar pleasure. The smooth, soothing tones of Mr. Dave Niehaus have rippled through the airwaves each summer night. When the only fun M’s fans had was hearing a ‘My Oh My!’ after a great play or a home run by a Mariners player, Niehaus was there to provide the entertainment, keeping us interested when otherwise many of us would not have been.

Niehaus is the reason why some of us in the Pacific Northwest became fans at all. Yours truly, included.

When I was three years old I went to my first Mariners game. Do I remember it? No.

When I was four I went to a few more. I don’t remember those, either.

What I do remember, however, is when I was five, and supposed to be in bed asleep so I could wake up and go to morning kindergarten, but I was sneaking my clock radio onto KVI-570 to hear Dave call the final half of the ballgame that night — and every night.

I was five years old and addicted to the enthusiasm of baseball and especially to the way Niehaus presented it to me every single night of the season.

Next April, Niehaus will climb into his captain’s chair for his 30th season in the Mariners broadcast booth. And win or lose, just like always, he’ll pepper the airwaves with a familiar voice. A voice that tells Mariners fans that the game is on. A voice which, without having to mention the score of the ballgame, can tell the listener that things aren’t going so well, or that the M’s are cruising.

Who doesn’t love the ‘Grand Salami’ calls? Who doesn’t enjoy the voice that tabbed the franchise’s first superstar as “The Kid?” Who doesn’t get excited when Dave’s voice jumps an octave or when he drops it down a few notches to pronounce the authority in which the Big Unit was dominating a ballgame?

Niehaus threw out the first pitch at Safeco Field, a telling tale in itself. But the thing I remember most from that day is what Niehaus said just moments prior to his one-hopper to the plate, commemorating The Opening Day.

“Ladies and gentleman, boys and girls… Welcome to your Safeco Field.”

For every goose bump that protrudes above the surface of the skin after hearing those words, there were a thousand more when the following call was made 10 years ago this month.

“And the 0-1 pitch on the way to Edgar Martinez swung on and LINED DOWN THE LEFT LINE FOR A BASE HIT! HERE COMES JOEY! HERE IS JUNIOR TO THIRD BASE, THEIR GONNA WAVE HIM IN! THE THROW TO THE PLATE WILL BE LATE! THE MARINERS ARE GOING TO PLAY FOR THE AMERICAN LEAGUE CHAMPIONSHIP! I DON’T BELIEVE IT! IT JUST CONTINUES! MY OH MY! ”

Niehaus and Scully aren’t that different, you know. Yes, there’s the six titles and 26 years of service with their current club that separate the two. Sounds like quite a bit until you realize the impact Niehaus has made on the Seattle sports community.

Niehaus might be a few years from retirement — he claims he sees no end in sight. But when the former Angels, UCLA Bruins, Dodgers and Armed Forces Radio Network broadcaster decides his career with the Mariners is over, things will be awfully different around here.

Perhaps Hall of Fame Detroit Tigers broadcaster Ernie Harwell said it best: “Your favorite broadcaster is like a comfortable pair of slippers. Someday when it’s gone, the new shoe is going to pinch.”

I say, if all it did was pinch, I’d be happy. Niehaus is our Vin Scully. It’s not Seattle Mariners baseball without him.

APRIL 2017 — Not long ago — mere months, really — the Seattle Mariners turned a corner as an organization when ownership changed hands and John Stanton took over as CEO. It mirrored what happened in the front office and dugout the previous winter when Jerry Dipoto and Scott Servais were hired to turn things around on the field.

Before that, however, the club made a hire that has no impact on the field, but a great one around the entire Puget Sound. Aaron Goldsmith.

As first pitch nears Monday in Houston, I’ll be dialed into the broadcast to hear Rick and Aaron call the first game of the 2017 season. I’ll love every second of it and look forward to the next game.

Both tell the story of the game so effortlessly; Rizzs involves timeless tales of the late 50s and early 60s in Chicago through the early years of his time with the Mariners. Goldsmith from a creative standpoint, mixing in the details of the game and all its glory, plus the information this generation so sorely craves.

It will be as beautiful as ever. After all, it’s baseball.

And all the while I’ll miss Dave Niehaus. But I imagine I’ll find a way to do it with a smile on my face, and the hope of the new baseball season.