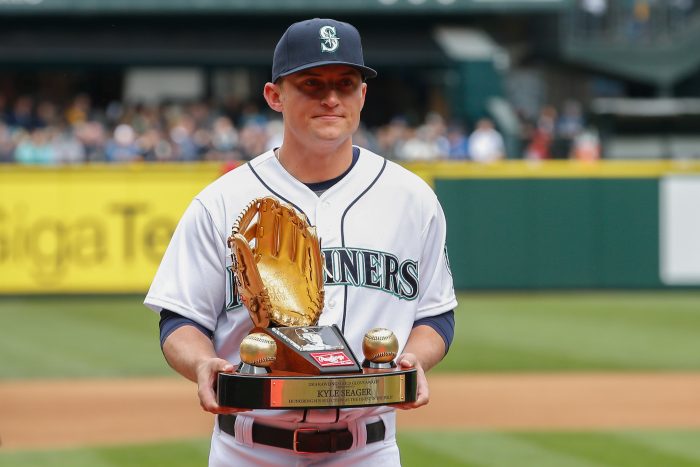 Kyle Seager wasn’t the first player chosen by the Seattle Mariners during the 2009 Major League Baseball amateur draft. In fact, the second baseman hailing from the University of North Carolina wasn’t even the club’s next choice. His name was finally called in the third round after Seattle had chosen four other players.

At the time, Seager’s selection was overshadowed in Seattle and nationally by a fellow Tar Heel drafted number-two overall by the Mariners — Dustin Ackley.

While the advent of Seager’s professional career did not garner much attention, his performance since debuting with Seattle in July 2011 has him on a trajectory to be an all-time great Mariner.

Some may consider my assessment a bit premature. After all, Seager has just six seasons under his belt. Still, his evolving résumé says he’s catapulting towards greatness in a Mariners uniform.

For the doubters — and believers — let’s look at six things about Seager factoring into my appraisal. Some will impress more than others will, but all are interesting; at least to me.

Prior to the Mariners’ third round selection in 2009, scouting director Tom McNamara reportedly asked his staff where Seager sat on their draft board. When informed the fifth round, McNamara opted to choose Seager immediately.

Legend has it Seattle’s war room was less than enthused by McNamara’s gut decision. Nevertheless, Seager’s selection was the best of Zduriencik’s tenure as Mariners’ general manager. The following table illustrates the top Mariners chosen between 2009-2015.

Please note I’ll be basing all comparisons on the Baseball Reference version of wins above replacement (bWAR). While WAR is not a perfect metric, it factors in all facets of the game. This is particularly useful when comparing players from different positions or eras.

As you can see, the draft yield has been less than optimal to date. Having said that, it’s plausible another player selected during the seven drafts overseen by Zduriencik’s staff will flourish.

One of the best in MLB

When it comes to talent, the hot corner is as deep position as any position in baseball. Only second base (3.4 bWAR) had a higher average value than third base (3.2) in the American League last season. Despite the strong field, Seager held his own against his peers. The following table illustrates his standing since becoming an everyday player with Seattle in 2012.

Certainly, younger players such as Nolan Arenado and Kris Bryant may eventually overtake Seager. Nevertheless, his performance and value places him in the upper echelon of an elite group.

Since 2012, Seager has missed just 17 games. During that period, only shortstop Alcides Escobar of the Kansas City has played more innings in the field. Yes, Kyle Seager likes baseball.

Obviously, good health — and better luck — factor into the availability of the players listed above. But, Seager’s durability through his first six seasons further reinforces his value to his ball club. Along with teammates Robinson Cano and Nelson Cruz, manager Scott Servais has a core with a history of sustained availability.

Although Seager is top-five at his position, his $11 million salary for the upcoming season ranks just eleventh among third basemen.

Some of you may point out Seager’s compensation jumps to $19 million in 2018, which will make him number-two on the list. True, but several third baseman will leapfrog him over the next three years.

Josh Donaldson is currently earning $17 million with one year of arbitration eligibility remaining. It’s possible he will match or exceed Seager’s salary next year. Certainly, he’ll surpass the $19 million mark when he hits the free agent market after the 2018 season.

Granted, Donaldson will be 33-years-old when he hits the market. As a result, he may have to settle for a short-term deal. But, he will still command top-dollar assuming he stays healthy and continues to perform at an elite level.

Manny Machado enters the market the same year as Donaldson, but he’ll be seven years younger and is likely be the highest paid third baseman in the majors.

One season later, Arenado hits the market along with Anthony Rendon. Arenado could supplant Machado as the best compensated third baseman. Regardless, both he and Rendon stand to overtake Seager.

In 2020, Justin Turner is set to earn more than Seager’s $19.5 million paycheck. If my projections turn out to be true, Donaldson, Machado, Arenado, Rendon, and Turner will be earning more than a 32-year-old Kyle Seager. That seems about right.

The best Mariner third baseman ever

Admittedly, the pool of good third basemen isn’t very deep for the Mariners. But, Seager sits atop the list. Sure, Jim Presley was an all-star in 1986 and hit 115 home runs during his six years with Seattle. But, his 3.3 bWAR during his tenure as a Mariner won’t get him into the conversation.

Some of you may notice Edgar Martinez did not make my list. While he did start his career as a third baseman, the should-be Hall of Famer spent just 28-percent of his career at the position. Besides, Major League Baseball named their Designated Hitter of the Year award after him.

The only true competition is future Hall of Famer and current Texas Ranger Adrian Beltre. While some local fans view Beltre’s five-season stay in the Emerald City as a disappointment, he was the club’s best third baseman in franchise history prior to Seager’s arrival.

Considering his penchant for playing nearly every day and under team control through 2021 with a club option for an additional season, it’s plausible Seager will reach top-three or higher status in several categories before leaving the Pacific Northwest.

The following table illustrates top-five franchise leaders (with their totals in parenthesis) and Seager’s numbers listed at the bottom.

While Kyle Seager isn’t the best third baseman in the game, he’s good enough to be in conversation whenever the elite receive mention. In time, the same will apply to his stature as a Seattle Mariner.

Overall, not too shabby for a player selected on a gut decision.