The Legacy of Adrian Beltre 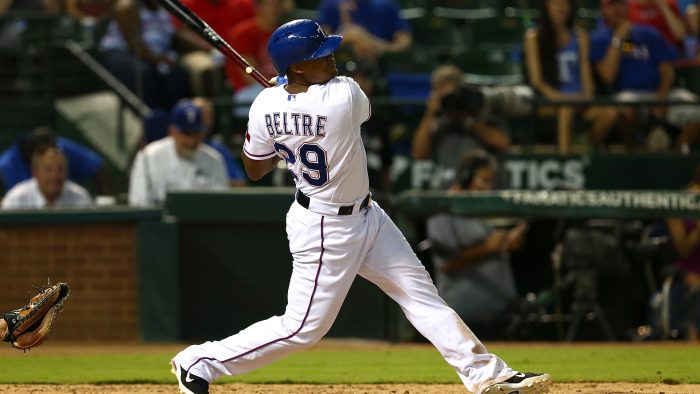 When the Texas Rangers come to Seattle tomorrow to play the Mariners, third baseman Adrian Beltre won’t be suiting up for Texas due to a calf injury.

I suspect a segment of Seattle’s fan base is ambivalent to Beltre’s absence from the Rangers lineup. After all, the least productive period of his 20-year big league career occurred while wearing a Mariners uniform.

On the other hand, he wasn’t a bust in Seattle.

As a Mariner, Beltre won two Gold Gloves and averaged 21 home runs and 32 doubles annually. Moreover, there’s no denying he was clearly the greatest third baseman in franchise history until the emergence of Kyle Seager. The 38-year-old also rates as one of the best at his position ever.

On the field, Beltre is a defensive stalwart. Only the great Brooks Robinson has produced more defensive value (39 WAR) at third base than the four-time all-star (27.5).

For those who don’t subscribe to sabermetrics, the Rangers’ third baseman also looks appealing through the prism of standard statistics.

Beltre already has more hits (2,829) while playing third base than anyone else in the history of the game. Only Mike Schmidt (509) and Eddie Mathews (461) have more home runs his 420. For those wondering, Alex Rodriguez logged more games, hits, and homers as a shortstop than third base.

Entering this season, the four-time Silver Slugger award winner ranks number-33 on the all-time hit list and trails Frank Robinson by one hit. Considering he’s under contract through 2018 with Texas, it’s plausible he finishes his career within the top-15.

Although currently on the disabled list, Beltre has been exceptionally durable. Before last week, he hadn’t missed an Opening Day since 2001 and has averaged 152 games annually since 2012. Only Brooks Robinson (2,834) has played more contests at third base than Beltre (2,598).

Clearly in the twilight of his career, Beltre hasn’t played like someone ready to hang up his spikes. Rather, he’s been historically good. Since 1961, only three players had a higher bWAR between ages 35-37. You’ve probably heard of them.

It’s likely the four-time all-star finishes his distinguished career in a Rangers uniform, which seems apropos since his Hall of Fame credentials were cemented deep in the heart of Texas.

Perhaps, by the time he reaches Cooperstown, any disappointment surrounding Beltre’s stint as Mariner will diminish.