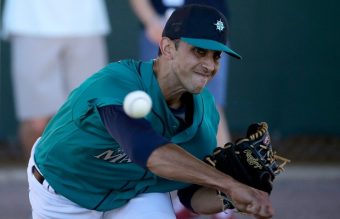 We all love the trade deadline. We all loves trades. They bring a different level of excitement to an otherwise long, drawn-out season. No team is immune to the trade deadline. Bad teams, great teams, those in the middle, they’re all part of the trade buzz and that starts about now for all of the aforementioned.

Tuesday, Julie DiCaro of 670 The Score in Chicago reported via Twitter the Mariners have been scouting the Chicago Cubs “at all levels.”

DiCaro added, via Twitter reply, whom the Cubs are apparently looking at on the Seattle roster:

Told position players with power, but nothing specific.

The Mariners bats with power include Robinson Cano, Nelson Cruz, Kyle Seager, Adam Lind, Franklin Gutierrez, Leonys Martin, Seth Smith and Dae-Ho Lee. Let’s scratch Lind and Lee from the discussion, since they’re 1B/DH types only and the Cubs have one of the best first basemen in the game. And since the National League doesn’t offer the designated hitter, let’s scratch Cruz, too; he’s a bad outfielder and the Cubs’ front office and field staff greatly value defense.

This leaves platoon bats such as Smith and Gutierrez and full-time centerfielder Martin. The Cubs have Dexter Fowler in center and while moving him to left field and inserting Martin in center makes the Cubs better, it’s unclear what Seattle could get out of moving Martin, who is under club control for two more seasons.

The same goes for Seager. It’s late June and the Mariners have to plan for buying and selling both but if they’re making significant moves right now, the result has to be somewhat lateral at worst; get younger and gain control years while maintaining the overall talent level can be done. Or perhaps a deal now helps GM Jerry Dipoto make a bigger splash in a few weeks where the overall net gain is greater.

Seager does make sense for the Cubs, too. Such a move pushes Bryant to left field regularly, where he’s an upgrade over Jorge Soler’s .223/.322/.377 triple-slash. What the Mariners could get back to make it worth their while is unclear.

Again, at this stage, dealing Seager for prospects is a sell job. The 38-38 Mariners have no business pulling the plug on their season right now, despite the intrigue of the Cubs’ farm system. Yes, Kyle Schwarber could be the starting first baseman next year. Yes, shortstop Gleyber Torres is a very good prospect and highly valuable. Neither does the Mariners any good on June 28, or anytime this season — unless they’re traded again.

Mariners fans shouldn’t worry too much about Seager being the bait here. Dipoto can read just like we can. Seager is 28 years old and along with Martin the youngest member of the core of the club. Cano is 33, Cruz 36, Smith 33, Gutierrez 33 and catcher Chris Iannetta 33. If the Mariners move Seager, it’s sensible to do so in a selling situation or over the offseason as part of a larger overhaul. The Mariners shouldn’t be looking to get older and they shouldn’t be looking to move their best prime core player for prospects, at least for another month.

Cano doesn’t make sense for the Cubs, either, since Ben Zobrist is a better defender and has performed very well at the plate — and Cano’s contract is, well, large. Smith doesn’t seem to fit all that well considering his defense is below average and the Cubs have Chris Coghlan filling such a role. Gutierrez might be of interest to the Cubs as a platoon partner for Coghlan, a left-handed batter, but Coghlan hasn’t hit enough in 2016 to suggest he should be playing four days a week. It seems Theo Epstein and Jed Hoyer would be after an everyday player.

So what in the world could the two sides be talking about in late June? It’s not inconceivable the conversations may have or will include any or all of the above. The best bet, in my opinion, is something a lot less flashy:

DiCaro also tweeted Tuesday the Cubs have been in talks with four American League clubs and have interest in Minnesota Twins reliever Fernando Abad, a right-hander.

The Mariners have right-handed relievers.

Fans may wonder why the Mariners would trade away quality relievers and the potential answers to that question include:

2. They wouldn’t unless it’s part of a bigger package that nets them a starting pitcher that can help right away.

3. They wouldn’t at this point in the season and the non-routine scouting of the Cubs’ organization is actually closer to routine than not and in preparation for something later this summer.

You can bet the farm the Cubs aren’t the only system the Mariners are scouting more heavily than normal right now. It’s a club that could be in contention next month and looking to add, but it’s also one that could find themselves in position to sell, too.

It’s how middling clubs get better and set themselves up for more sustainable success. In a sell situation, we should hear about the Mariners shopping Cruz, Smith, Gutierrez, Iwakuma, Nick Vincent, Joaquin Benoit, Vidal Nuno, Steve Cishek, Martin, Iannetta, Lind… pretty much everybody. Felix Hernandez is off the table. See what the market may bare.

The Cubs’ greatest area of need is the bullpen. The club currently is carrying a 3.98 FIP and the eighth worst BB/( of any relief corps in baseball. Cishek, who is signed through next season, might be an interesting piece for the juggernaut Cubs. They may also see Nuno or Mike Montgomery as a significant upgrade to lefty Clayton Richard and even Travis Wood.

Seager, though, is among the few topics you make the other clubs broach.

If I had to wager, I’d bet the two sides don’t make a single trade of great substance with one another unless and until Seattle decides to sell.

If they decide to sell. If they get healthy and add a piece or two of their own to the pitching mix, the Mariners may find themselves in the thick of their own race to the postseason. At which point most or all of the above names will be off the table for prospect returns.