Austin Nola was a 5th-round pick in 2012 by the Miami Marlins out of LSU, six spots behind Chris Taylor (Seattle), two behind Mallex Smith (Pittsburgh). He spent six years in the Marlins organization before the Mariners signed him as a minor league free agent following the 2018 season.

Early in his pro career Nola stayed at shortstop primarily. He began to play a bit at second base and third base in Double-A Jacksonville in 2014 and 2015, but remained primarily in his natural spot. In 2016 he played just 32 of 110 games at SS, and 56 at second.

Following the ’16 season, the Marlins transitioned him to catcher, where he caught 75 games between AA and AAA in 2017, then caught 68 games in AAA in 2018. He split time between catcher and 1B in Triple-A Tacoma.

Once the Mariners summoned him last summer, he spent just just 38 2/3 innings for at catcher, as Tom Murphy and Omar Narvaez covered the position. Nola played 59 games at first base, 15 at second, four at third, and two in the outfield.

Nola’s minor league results at the plate were at best a mixed bag, often showing a playable hit tool when he was older than the median competition, but success was limited. His contact rates were passable, and he drew walks at least nine percent of the time in all but one season. But the swing limited his damage to 15 career minor league home runs in more than 2,800 plate appearances through 2018.

Some of the power can be attributed to Nola’s strength. Once he moved from shortstop to catcher, he added good weight to his lower half. But Nola also made some swing adjustments that paid off in the form of more leverage without sacrificing zone coverage.

Nola’s 2019 half-season with the Mariners is interesting to look at in graph and table form, so let’s do that, courtesy Baseball Savant and Brooks Baseball. 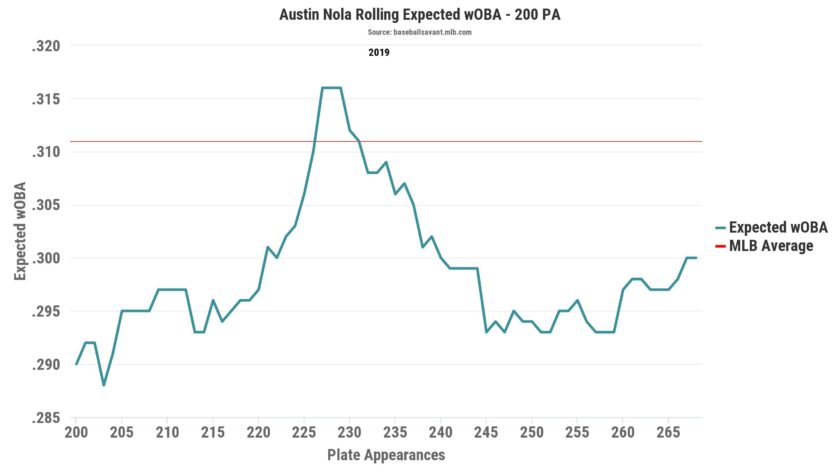 Obviously, if Nola repeats his 2019 offensive output and can handle the catching duties, he’s a good player and a solid value despite his advanced age for a player with limited experience.

Sidebar: One thing to keep in mind with Nola’s age is the fact so little of his time has been spent in the crouch, so he’s far from the typical 30-year-old backstop, and he began 2020 with less than a year of service. 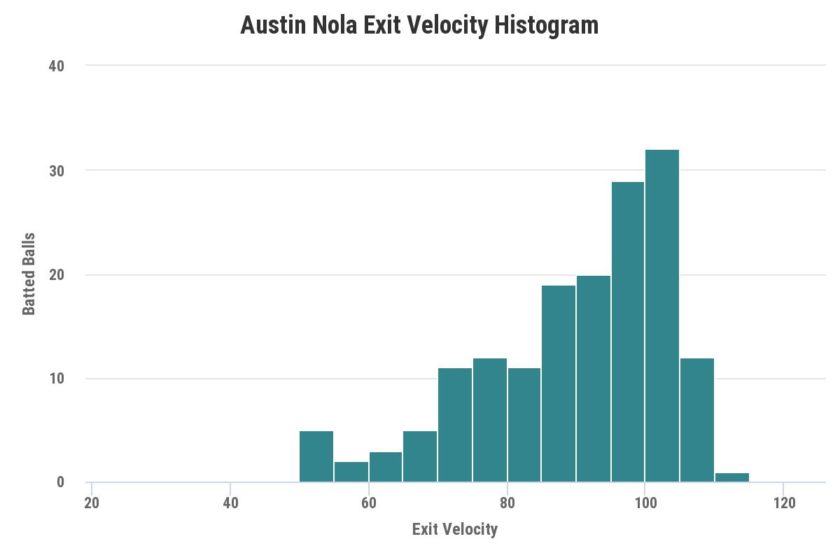 Nola hit the ball solidly last summer (34.5% hard hit rate), despite lacking impressive exit velocity numbers (87.4). There was almost certainly a bit of randomness to his success, but hitters that use the field the way he did tend to find grass more often.

In 2020, Nola may need to make a little more contact — 23.6% strikeout rate — not that such a rate is inherently poor or that he swing through a lot of pitches. Nola posted a 7.9% swinging strike rate, chased just 21% of the time and made contact on pitches in the zone 78.5% of the time he offered, all average to well above-average marks.

So why did he strike out nearly 24% of the time?

He took some hittable pitches early in counts, gave away a few too many strikes, and fouled off 46% of the four-seam fastballs he swung at over a 399-pitch sample, which is about 4% higher than the league average.

The scouting report says Nola tends to struggle with plus velocity at times, likely due to average bat speed, but when he’s aggressive on them early in counts he’ll hit for average or better power. He sees the ball well, too, which bodes well for him against average fastballs, and Nola showed an ability to stay back on soft stuff and drive them from gap to gap.

He will use most of the field with doubles power, and does a good job covering the zone with the barrel and spraying balls from line to line. His home-run power in the majors was pretty severely to his pull side, but he does create lift to right-center and right field with some authority, suggesting perhaps there’s enough pop in that direction to expect to see a few more long balls to that side over the course of a larger sample.

For Nola to have a shot at repeating last year’s output, or coming close to it, he’s likely going to need marginal improvements in contact rate and performance versus above-average fastball velocity — which is about day-to-day game plan more than anything physical or swing-related.

Doing so will help him avoid so many two-strike counts — 136 of his PAs last season ended with a two-strike count, 56 of those when behind, 37 more when the count was even at 2-2, suggesting he saw a ton of pitcher’s pitches.

Like any batter, Nola just need to get a little bit better in 2020 at getting pitches to hit and executing before he gets to unfavorable counts.

As we examine Nola’s defensive prowess behind the plate in 2020, his bat remains in question, too. But what we saw a year ago was promising, as is the recent trend, where he mashed in Triple-A, hit well with some pop in the majors, and now has a chance to adjust to the adjustments and prove he possesses staying power beyond the Mariners’ rebuilding seasons.

Nola’s ability to play first base, third base, a little left field and even second base in a pinch could make him an ideal third catcher with the new 26-man roster rule, if he’s not a viable No. 2, which certainly is in play.