The Mariners Need a Season of Septembers 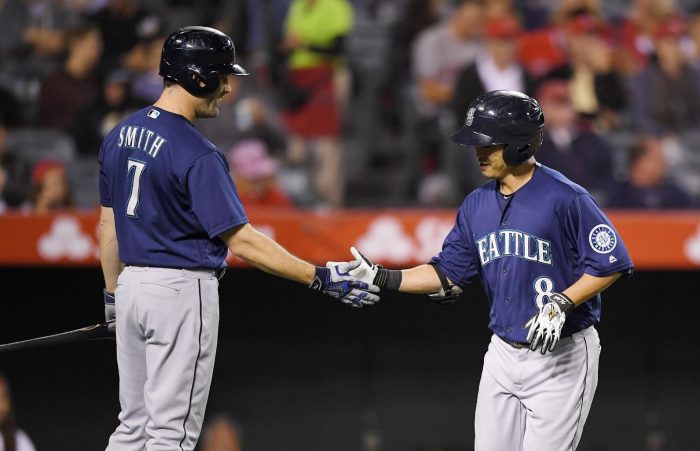 A few weeks after major league baseball rosters expanded from 25 to 40 players, Mike Salk, co-host of “The Brock and Salk Show” on 710 ESPN Seattle noted the Seattle Mariners were “built for September baseball” and truly benefiting from having more bullpen options and a deeper bench.

Salk’s simple, yet astute, observation was largely focused on the strong September performance of the Mariners. But, it resonated with me for another reason. Seattle needed more than 25 players to field a a complete ball club in 2016, especially when it came to position players.

Sure, a few extra relievers after September 1 was helpful. But, having more contributors on the bench, particularly outfielders, helped mitigate a challenge that plagued the Mariners throughout the season — positional platoons didn’t positively influence the roster as much as expected.

Entering 2016, Seattle employed two platoons — first base and right field. Eventually, they added another time share in left field when left-handed hitting Nori Aoki scuffled against southpaws. Why would the Mariners employ such a strategy?

Generally, hitters tend to do best against opposite-handed pitchers. But, everyday players — such as Robinson Cano, Nelson Cruz, and Kyle Seager — can hold their own or even excel against their like-handed counterparts. Their overall production outweighs any limitations and that’s why they’re in the lineup regardless of who is toeing the rubber.

Conversely, there are Mariners — Seth Smith, Adam Lind, and Franklin Gutierrez for example — with a career history of struggling against like-handed pitching. They’re better suited to face a steady diet of opposite-handed competition. In a platoon role, a club can take advantage of their strengths and minimize their offensive shortcomings.

Other times, placing a struggling player — such as Aoki — into a platoon makes sense. Between 2012 and 2015, the 34-year-old posted the highest batting average (.312) among left-handed hitters with more than 600 plate appearances against southpaws during that period. This year though, he hit nearly 90 points below his career mark and found himself shifted into a more limited role by the second half of the season.

By employing three platoons and a switch-hitting shortstop, manager Scott Servais was able to have an opposite-handed hitter confront opposing pitchers during 68-percent of the club’s plate appearances. That “platoon advantage” was tied for second highest in the majors with the New York Yankees.

Still, it’s only an “advantage,” if the sum of the players involved is productive. That hasn’t necessarily been the case in Seattle this year. To see what I mean, take a look at the following table, which illustrates where the positions platooned by the Mariners ranked against other American League teams to see what I mean.

While Seattle left fielders were proficient at reaching base, the same can’t be said about right field and first base. If it weren’t for 204 plate appearances by Cruz in right field and an offensive surge by first baseman Lind during the last six weeks of the season, the numbers would’ve been far worse.

Perhaps, that’s why general manager Jerry Dipoto recently told “Danny, Dave and Moore” of 710 ESPN that “We’re trying to move away from being as platoon-centric as we’ve been this year.” Offensive production isn’t the only reason to consider a course correction.

Versatility
Prior to the September roster expansion, the Mariners generally carried 12 pitchers and a backup catcher leaving three bench spots remaining. One of those openings was used to support the first base platoon of Lind and Dae-ho Lee — two players capable of playing just one position in the field.

The pairing of Lind and Lee was tolerable entering the season because the duo’s offensive proficiency was expected to compensate for the club’s diminished roster flexibility. By mid-season, though, it was clear that the Lind/Lee tandem were not meeting expectations. That loss of roster maneuverability was no longer as palatable.

With both first basemen eligible for free agency, there’s an opportunity for the Mariners to alter their approach at the position. Dipoto is already on record that left-handed hitting rookie Dan Vogelbach — picked up from the Chicago Cubs in the Mike Montgomery deal — will get a long look at first base during Spring Training.

Assuming that Vogelbach — or another left-handed hitter — starts the season as the regular first baseman, adding a versatile right-handed hitter capable of playing multiple positions, including first base, during the offseason would be beneficial.

Steve Pearce of the Baltimore Orioles is an example of such a player. The 33-year-old is a pending free agent and he started 10 or more games at first base, second base, and both corner outfield spots this season. I’m not saying the Mariners should get Pearce. But, a player in that mold would have significantly improved the club’s roster flexibility in 2016.

Corner outfield defense
Many observers — including me — believed the offseason acquisition of Aoki and the combo of Smith and Gutierrez would improve an outfield defense that was one of the worst in the majors in 2015. That wasn’t the case.

In 2015, Seattle’s left field defenders ranked number-25 in the majors — based on defensive runs saved (DRS). This year, they were number-27. In right field, the club went from 26 to 23. Not exactly dramatic improvements and still well below average.

After reviewing the following table, which illustrates the DRS for the three Mariners with the most innings played at each corner outfield position, it’s clear why the club didn’t significantly improve in 2016.

For those not familiar with DRS, it’s a defensive metric that quantifies a player’s defensive value. Zero runs saved is considered “average,” while a positive or negative number indicates above or below average defense respectively. If you’d like to learn more about DRS, you can find an excellent explanation at FanGraphs.

It’s worth noting that DRS is best used with large samples over several seasons. But, in this particular case, the metrics support what was readily on display throughout the season. The Mariners’ corner outfield defense wasn’t good enough in 2016, especially with spacious dimensions of Safeco Field.

Gutierrez — once referred to “Death to Flying Things” by the late great Dave Niehaus — has seen his once-dynamic range erode due to age and chronic illness. Smith too appears to have lost a step defensively and Aoki’s indirect routes to fly balls are nothing less than an adventure.

If the Mariners choose to do so, they’ll have the opportunity to move past all three players during the offseason. The team holds a $7 million option for 2017 on Smith with a $250 thousand buyout, while Aoki and Gutierrez are scheduled to become free agents.

During the season, Dipoto started to incrementally address his outfield’s defensive and athletic shortcomings by promoting Guillermo Heredia from the minors and acquiring Ben Gamel from the Yankees. Both are capable of playing center field and are significant defensive upgrades over Gutierrez, Smith, Aoki, and Cruz.

While it’s possible the youngsters will squeeze out the defensively limited veterans, it’s still unclear whether Heredia or Gamel can consistently hit big league pitching.

Platoon disadvantage
Gutierrez was exceptional against left-handed pitching this year. Look at a side-by-side comparison of the 33-year-old’s performance to Cruz’s to see just how well “Guti” performed. Some of you may be surprised by the similarities.

This is good news, right?

Although a platoon permits a hitter to take advantage of opposite-handed pitchers and obscure their limitations versus like-handed hurlers, it helps if they can at least hit a little against that like-handed competition.

So, it’s good that Gutierrez raked against righties, but he struggled mightily against left-handers. During 65 plate appearances, he slashed .148/.185/.279 with two home runs.

Lind, Smith, and Aoki all struggled against left-handed pitching, although it’s worth noting Lind struggled against all pitching in 2016. The only Mariner “platooner” to demonstrate same-handed success was the right-handed hitting Lee against righties (.246/.294/.410 slash).

Some may contend that the struggles of the players I’ve mentioned is why the Mariners used them in platoons. I agree. However, there are times when those match-ups can’t be avoided. Especially with the specialization of bullpens and short benches — a byproduct of adding those specialized relievers.

Making moves
I’m not suggesting every platoon player has to hold their own against same-handed pitching. If they could, they’d be everyday players.

Sill, having four or five role players with limited positional versatility, who also provide little-to-no defensive value and are extremely limited against like-handed pitching is a distinct challenge.

Optimally, acquiring everyday players would be the best solution for the Mariners. But, it’s not easy to add without making significant trades or signing major free agents. That’s why it’s plausible the club will attempt to blend some of the old with the new instead.

In the past, I’ve suggested that retaining Aoki for one more season makes sense — assuming he wants to return to the Emerald City. Doing so could lead to the departure of Smith. Conversely, the Mariners could pick up Smith’s option and let Aoki walk.

Either choice would free up more playing time for younger, more athletic, and less expensive options — such as Heredia or Gamel. But, going young — especially with unproven players — is a risky move for a team that finished on the fringe of contention in 2016.

The challenge facing Dipoto this offseason is balancing everything I’ve discussed in order to build a 25-man roster that functions as well his expanded September unit. Otherwise, his team risks a regression in the standings.

Taking a step back would be a huge disappointment considering the exciting conclusion to the Mariners’ season, which was a stark reminder of just how exciting Seattle baseball could be once again.