Paxton is the reason 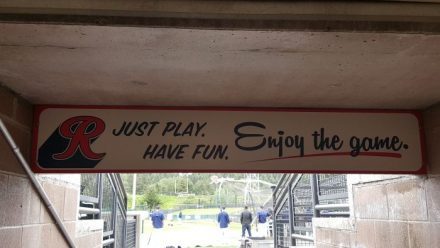 James Paxton has shown he can dominate baseball games with a 92-97 mph fastball with late life, a plus curveball and the occasional cutter and changeup. What he’s also shown is that he hasn’t been able to harness the stuff enough to remain a consistent option at the big-league level. He started 2016 in Triple-A Tacoma after a rough March in Peoria where he allowed 33 of 80 batters he faced to reach base, including eight bases on balls. So, off to Tacoma he went.

Paxton then issued nine walks to the first 34 batters he faced and was removed in start No. 2 after recording just seven outs. At that point he’d allowed eight earned runs on nine hits in addition to the nine bases on balls.

What took place after that is rather remarkable in more ways then one.

Paxton proceeded to go 61 straight batters without issuing his tenth walk of the year, covering three starts where he yielded just 12 hits and one run in 17 1/3 innings. How?

Recently the Mariners revealed Paxton has adjusted his arm slot, but there’s more to it then that, and the results are about much more than command and control.

“We discovered that wherever his front side went, his arm followed,” said Tacoma Rainiers pitching coach Lance Painter. “Since then, the life has come back (to his fastball).” 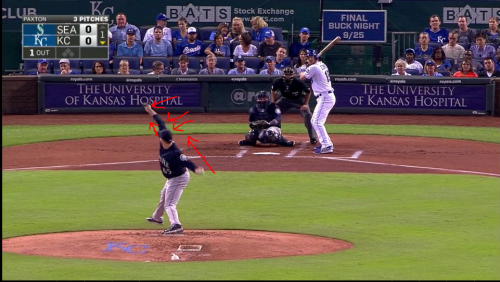 Paxton never lost much velocity, still sitting 92-93 mph and occasionally touching 95-96, But it appeared he was living more in the low-90s by design — in attempt to throw more strikes. Not necessarily the case, however. Painter and Paxton watched video of his start in Albuquerque April 15 when he served up a grand slam and didn’t get out of the third inning. Painter saw the front side — the side of his non-throwing arm — was too high. He suspected in previous years that wasn’t the case, so the two of them then checked video from 2013, when Paxton was in Triple-A and then the big leagues, confirming a more even, if not front tilted shoulder. While Painter isn’t surprised this has helped Paxton regain the explosion in his fastball or his ability to throw strikes consistently, he’s impressed how quickly Paxton applied this to his work on the mound, especially with how Paxton is built. He’s 6-foot-4, but with extremely long arms and legs, which contributes to the glove arm rock-and-fire issue Painter and Paxton noticed and have since applied a fix.

“It is tougher,” Painter said of Paxton’s long levers. “He watched the video with me. He’s picked things up very quickly. It came very quick. He has an ability to see things and apply them right away. He’s confident again, he sees his stuff exploding at the plate, he’s working quicker and everything is kind of flowing better.”

Paxton did so after that awful outing in Albuquerque and it started working for him immediately. This would be impressive for even the most athletic pitchers with compact deliveries, and it took Paxton one cycle. Granted, it’s just three starts and all he did, essentially, was copy what he’d done in 2013, but this is a habit that showed up long before this season. The photo above is from his final start in 2015 — September 24 — and looks identical to his first big-league start of last season. Habits are difficult to break, particularly in such quick fashion.

This wasn’t the first time Paxton has shown a quick-study acumen. Painter was Paxton’s pitching coach at Double-A Jackson in 2011. He was slow to the plate and baserunners already were taking advantage, not to mention a deliberate delivery often is cited as cause for inconsistencies, the inability to repeat. “I showed him video of Andy Pettitte,” Painter said. “A month later, he was basically what an average major-league (pitcher) is to the plate. He’s not afraid to try something. A lot of guys want to stay status quo, but he believes in what he sees.”

So perhaps the question we needed to ask wasn’t “how did Paxton turn it around?” Maybe it was “why?” and “who?” While Painter absolutely contributed by seeing something that wasn’t “quite right,” Paxton is more the ‘who’ and ‘why’ of his recent three-start stretch of dominance.

The way he’s thrown the ball over those 17 1/3 innings has impressed everybody, including a rival scout that was hoping they could pry Paxton from Seattle’s hands before he was fixed, but failed. “He’s a different animal,” the scout said, “but the stuff is undeniable; you don’t see deceptive 95 with life and a out-pitch curveball on a left-handed starter that often. He was outstanding last time out (April 25 vs. Sacramento).”

If Paxton is able to continue such success with regularity — and that always has been a concern for the southpaw — the Mariners will have a terrific ‘problem’ on their hands. They’ll have more good starting pitchers than they can use on their roster at a given time, which would then mean a beyond viable replacemens when injuries occur.

When the majority of the world wanted to move Paxton to the bullpen, first in 2011, then again in 2012, then again in 2013, again in 2014 and after some rough outings this past spring training, the reason that didn’t make any sense was his control problems will magnify in a relief role. This is why good-stuff relievers with high strikeout totals but some control problems aren’t generally asked to throw high-leverage innings. If Paxton proves this fix not only will remain, but that he can maintain with it, Seattle could have another relief option as the season unfolds. Not because Paxton can’t start, but because the club’s biggest needs this summer likely will be in the bullpen. Paxton could save GM Jerry Dipoto the trouble — and cost — to go land another power arm. I still think they need two — one with closing experience a big fastball — but if Paxton can be one of them for half a season, all the better for all parties.

Notes
Paxton did alter his grip on his curveball in spring training, moving his index finger — the ‘knuckle’ digit — to create a firmer grasp of the baseball, and I can’t help but wonder if it will also help him avoid tearing the fingernail, an issue he’s had in the past on more than one occasion. Painter noted that the command and spin of the knuckle-curve, like traditional grips, is actually mostly dictated by the middle finger… The organization prefers Paxton throw more changeups than cutters, but Painter did say the cutter does break more than most cut fastballs. But it lacks the depth of a true slider and isn’t ideal versus right-handed batters… Mayckol Guaipe, now in the big leagues, touched 95 mph a half-dozen times or so this season, and his early time in Seattle this season he’s averaging 94 mph. This is one full mph up from a year ago. One potential reason? His delivery has been much smoother, more in sync — the timing has been better… Paul Fry, one lefty to keep an eye on, is working 89-91 mph but with an above-average slurve thats weeps away from lefties. Painter is working with him to create more depth, so he can throw it more versus right-handed batters. Fry also is working on developing a changeup. Why the third pitch for a reliever? To help him battle right-handed batters more consistently. There really isn’t a place for strictly situational relievers these days. If the Mariners needed a lefty right now, David Rollins would be the call-up.