Not for nuthin’: Roberts was right, but who cares? 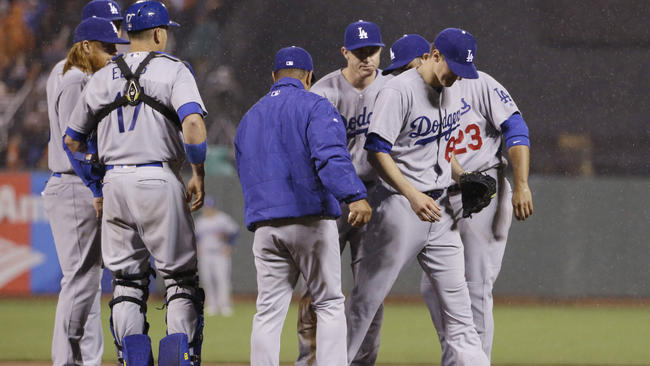 Last Friday night, the Los Angeles Dodgers were leading the San Francisco Giants 2-0, with one out in the bottom of the eighth inning, when Dodgers manager Dave Roberts popped out of the visiting dugout to make a pitching change. The first-year manager had opted to remove his starter, Ross Stripling, and replace him with veteran reliever Chris Hatcher.

On most nights, observers wouldn’t have given much thought to Roberts’ move. Stripling was making his major league debut and had thrown 100 pitches; the most of his young professional career. Also, the right-hander, who is two years removed from Tommy John surgery, had never pitcher above Class-AA level until last Friday night.

Still, this wasn’t a typical rookie debut. For those of you who don’t know, Stripling hadn’t surrendered a hit during his 7.1 inning effort when his manager appeared to remove him from the game.

As one might expect, a debate erupted over Roberts’ decision to yank the 26-year-old, who appeared to have a chance to make history. Stripling could’ve been the first pitcher to record a no-hitter in his big league debut in over 100 years; someone named Bumpus Jones did it in 1892. Certainly, it would’ve been a special moment for both Stripling and Dodgers fans.

Personally, I believe that the Dodgers skipper acted appropriately. Friday night’s outing was Stripling’s longest since his injury, 100 pitches were the most he’d thrown at any professional level, and he just walked his fourth batter. The rookie hurler pitched just 11 innings in four Spring Training games with the big league club. His lone start was a five-inning outing when he threw 80 pitches versus the San Diego Padres on March 29.

It’s clear to me that the kid was at his limit and Roberts played it safe, as he would with any young starter. The only reason anyone cared about Stripling’s removal was the zero in the “hits” column.

Letting the Dodgers rookie pursue an individual achievement wouldn’t have been in the best interest of a team that already lacks starting pitching depth or their young right-hander. As FOX Sports Ken Rosenthal tweeted the following day, Stripling’s father was grateful that Roberts looked out for his son.

#Dodgers‘ Roberts told Fox broadcasters that Stripling’s father thanked him with eyes watering up this morning for taking care of his son.

I’m sure a debate about the use of pitch counts and whether the Dodgers rookie manager made the right choice will rage on for a few more days. In the end, Roberts was right to pull Stripling. But, why does anyone care?

Yes, throwing a no-hitter is generally a big deal. Since 1920, there have been over 165,000 major league baseball games and there have been just 192 no-hitters thrown during that period. However, all of these performances weren’t masterpieces and didn’t deserve the instant fanfare that they received. The same applies to some potential no-hitters, like Stripling’s.

I’m not trying to be a killjoy, but I don’t understand the attention given to a potential no-hitter when the pitcher has allowed multiple base runners. In Stripling’s case, four Giants had already reached base, via the walk, by the time he departed the mound for the last time.

Let’s face it; Stripling’s performance wasn’t exactly epic. If he’d successfully thrown the no-hitter, the outing would be a part of major league history because he was making his major league debut. Not, because of a dominant presence on the mound. When I tweeted something similar over the weekend, I got push back — albeit cordial — from Twitter followers.

I don’t understand the fascination with a potential no-hitter when a pitcher walks four in 7.1 innings. Not exactly a game for the ages.

After thinking about it for a few days, I still don’t get the appeal of a potential no-hitter when the performance is pedestrian. Sure, if a pitcher is having his way with hitters, I’m all in and turning on the game. Otherwise, who cares if he’s walking multiple hitters?

A review of recent “no-nos” will show why I’m being so incredulous towards a no-hitter when it involves multiple base runners. Here are no-hitters tossed since 2001 when a pitcher surrendered at least four base on balls and struck out fewer than 10 batters.

A.J. Burnett faced 36 batters, which is nine above the minimum of 27. He walked nine hitters and hit another. Edwin Jackson was similarly wild during his no-hit outing, walking more than he struck out. As you look at all seven of these performances, do any scream “history in the making?” Not to me. Many fellow New Yorkers may disagree with me when it comes to the first name on the list though.

Yes, I acknowledge that Johan Santana’s no-hit performance in June 2012 has a special meaning to New York Mets faithful. It’s the only no-no ever recorded in the franchise’s 55-year history. But, to be fair, it’s only in the record book thanks to a blown call by an umpire.

As Dayn Perry of CBS Sports noted at the time, St Louis Cardinals outfielder Carlos Beltran hit a ball over third base that hit the foul line and was clearly fair, although it was ruled a foul ball. If the same erroneous call occurred today, it wouldn’t survive an instant replay review and the Mets would still be without a no-hit performance.

Truthfully, if it weren’t for the emotional impact that his performance had on Mets fans, Santana’s marathon outing on that damp night at Citi Field would be better known for being the beginning of the of his superb career.

While Mets fans fondly remember the game and Santana has no misgivings, manager Terry Collins told Phil Taylor of Sports Illustrated that he still regrets allowing the southpaw, who missed the previous season due to shoulder surgery, to throw 134 pitches.

The two-time Cy Young award winner only went past five innings during three of his next 10 starts before the team shut him down in August. During Spring Training 2013, Santana re-injured his shoulder; he hasn’t appeared in the big leagues since.

I understand that fandom interferes with objective thinking. Watching a pitcher be mobbed by his exuberant teammates after the last out of a no-hitter is both dramatic and exhilarating. Nevertheless, does anyone believe that they can make an unemotional argument that Santana’s, or any of the other “not so fabulous” no-hit performances, were better than the following efforts?

Each of the dominant performances listed above had fewer than four hits, no walks, and at least 11 strikeouts. All of these pitchers still managed to face no more than two extra batters. For me, all of these performances were far better than a no-hitter with multiple base runners. That’s why I don’t believe every no-hitter — or potential no-hitter — demands the same level of celebration or recognition.

Even if Ross Stripling had matched the obscure feat of a ballplayer named Bumpus from over a century ago and completed his debut with zero hits surrendered, I wouldn’t have been impressed due to the number of base runners he already allowed. But, that doesn’t mean I wasn’t impressed by the Dodgers rookie.

There are things in baseball that merit celebration, although they don’t show up in a box score. In Stripling’s case, I was already impressed that he’d completed a painstaking Tommy John rehab and earned the opportunity to toe the AT&T Park mound as a Dodgers starter. He didn’t need to finish Friday’s game to earn my respect; he already had it.