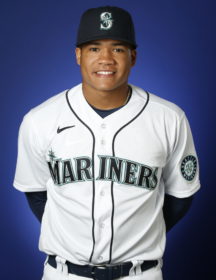 5. Noelvi Marte, SS
As Marte has  added strength and now looks the part of a corner bar with plus power. While it’s not out of the question he sticks at shortstop — I’d put the chances at 10-15% — most signs point to the 19-year-old eventually moving to the hot corner where his plus arm, good footwork and projectable range fit the hot corner well.

He’s still a ways away, but there’s a lot to like about Marte’s ability to get the bat head out front, use the middle of the field, and cover the zone both vertically and horizontally. The bat speed is plus and he generates natural leverage.

The swing is free and easy and he’s developed a better two-strike swing since signing nearly three years ago, including simplified usage of his lower half. As a result, Marte’s ability to stay back on soft stuff, yet trust his hands suggests advanced hitting skills and a projectable hit tool.

While I’m not quite as bullish on the hit tool as some, at lest not with so little experience and no live look for yours truly, I do buy the raw power and its chances to reach beyond plus levels and eventually show up in games, and from right-center to the left-field line.

Marte projects to play everyday, likely at third base, and hit 20-30 home runs with above-average batting averages and on-base marks. Since he’s still maturing physically, the power grade is a bit fluid, and he may end up merely an average runner despite being scouted a burner at 16.

He’ll likely start 2021 in Modesto to work on making more consistent contact versus better pitching. There’s a chance he earns his way to Everett this summer.

Considering at least two of the club’s Top 5 prospects project to graduate in 2021, Marte likely ends the season in the Top 3. It’s not out of the question he’s the club’s No. 1 prospect by July, and a Top 40 prospect in baseball by September.

As Marte gains experience, advances through the minors and becomes more skill-oriented rather than a tools-based prospect, his floor and median comps will increase in value, though both are relatively high considering his lack of experience at timeline.

Marte’s ceiling comp could get better, too, specifically in the power department. Among the most optimistic and aggressive comps I’ve heard this winter include Matt Williams, Adrian Beltre, and Alex Bregman.