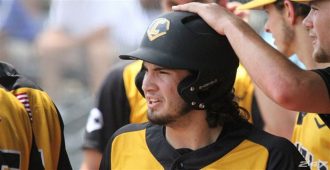 The Seattle Mariners selected third baseman Joe Rizzo with the No. 50 overall selection in the 2016 MLB Draft. Rizzo is out of Oakton High School in Vienna, Virginia.

Listed often times at 5-foot-11, that is generous, but he’s strong and sturdy and has arm strength suggesting third base may work. Rizzo’s a bat-first pick, which means if he has to move to the outfield the bat will play there, too.

Sound swing mechanics make Rizzo a polished prep bat and there’s some power in there thanks to good bat speed. He’s a 40-45 runner which doesn’t bode well for value on the bases and it may hinder his chances to play average defense off of the infield corners. Rizzo comes to pro ball with terrific makeup, but I don’t buy him as a second baseman, even the Carlos Baerga, Jeff Kent offense-first type, as some have suggested.

I imagine this is a below-slot pick for Seattle at No. 50, or at most a slot signing. There was buzz the M’s were willing to go over slot with this pick, but look for them to do that once or twice on Friday, instead, as their first two selections are probably going to come in around the combined slot values for both spots.

Rizzo isn’t an automatic Top-10 insert; I’ll have to do more homework to find a spot for him in the Mariners’ system, assuming they sign him away from South Carolina.