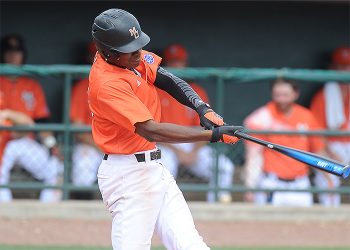 The Seattle Mariners selected Mercer outfielder Kyle Lewis with the No. 11 pick in the MLB Draft Thursday. Lewis shot up draft boards early in the spring with some putting Top-8 grades on him.

,Lewis is a right-handed bat with plus bat speed a power swing and above-average speed and defense. He throws well and fits nicely in a corner, but has a chance to stick in center. There’s some Mike Cameron in his setup and stance and is at least as athletic as the former Mariners centerfielder. He possesses more power upside, however, which likely helps him fit in right field if center doesn’t come to fruition.

The knock on Lewis is the swing mechanics. He uses a very high-driving leg kick to trigger 70-grade raw power, which projects to cause contact and timing issues in pro ball, eventually. He does quiet down the leg kick in certain two-strike situations or late in games when power is not his goal, but swing and miss is the concern here.

That worry is not aided by Lewis’ very active hands; he loads deep both vertically and back, away from the pitcher. He has big-time bat speed, so we may not see many issues in the lower minors, but this is something that may show up in the high minors once pitchers are better at… everything.

Enter the Mariners new player development staff, which in a short period of time seems to have a better handle on things than any in the past. If a more sound trigger is found for Lewis early, he could move quickly, potentially hitting Advanced-A ball by the time the 2017 season starts.

Long term, Lewis has a chance to hit for enough average to support 30-homer power he creates with natural leverage and loft, and sound baserunning and defense. Without much study time, I’d tentatively place Lewis immediately inside the club’s Top 3 prospects, perhaps No. 2 overall right behind Tyler O’Neill.

The Mariners have organizational needs across the board, but Lewis represents the best player available at No. 11. Look for Seattle to stay on the BPA path for pick No. 50.