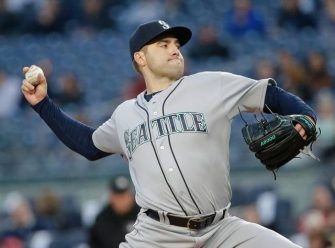 Of course nobody saw it coming. Not even for a quarter of the season. And even if it concludes without an end to the 14-year postseason drought, the 2016 Seattle Mariners have been one of the better teams in Major League Baseball through 40 games.

A lot of things are going right for the club. Not everything, but most everything. What’s led the Mariners to first place in the American League West at the quarter point? Which areas are sustainable and which aren’t? How’s first-ever manager Scott Servais handling the job this far? We’ll get to all that in the Quarterly Report Series, starting with first-quarter standings, trends and a look at the club’s ability to score runs.

But first, here are our first-quarter award winners:

Standings and Trends
At the one-quarter mark, the Texas Rangers and the Mariners are the only teams with a winning record in the division. But, there’s plenty of baseball remaining and it’s way too early to anoint a front-runner or discount any club. The next 40 games should help determine who’ll be contenders and also-rans.
Provided by Baseball-Reference.com: View Original Table
Generated 5/20/2016.

The defending American League (AL) West division champion Rangers will soon get a boost when their ace — Yu Darvish — returns from Tommy John surgery. He’s completed four rehab starts and scheduled to make another on Sunday. The club’s bullpen — ranked last in the AL by numerous metrics — looks to be their Achilles Heel. Texas recently removed Shawn Tolleson from the closer spot and demoted former Mariner Tom Wilhelmsen to Class-AAA Round Rock. For the time being, Sam Dyson will be the team’s closer.

Although it’s frustrating for fans to watch games slip away when relievers struggle, the bullpen is the easiest part of a roster to improve during the season. Rangers general manager Jon Daniels has never shied away from making in-season moves to make his team more competitive. There’s no reason to believe that he won’t act again in 2016, if his ‘pen doesn’t improve.

From a distance, Los Angeles appear to be a good candidate to move players at the August 1 non-waiver trade deadline. However, with one of the worst minor league systems in the majors, they can ill-afford to part with the few players on the big league roster who are both good and under team control.

The Oakland Athletics finished April just one game over .500, but have won just six of 17 games in May and have a negative 34-run differential this month. Unless the club can change its trajectory, they’re on a path to being potential deadline sellers.

Players such as pitchers Sonny Gray, John Axford, Rich Hill, and outfielder Josh Reddick may be available, if the Athletics are out of contention and the price is right. It’s worth noting that Reddick’s availability and value will depend on the recovery of the thumb he fractured this week.

The most enigmatic team in the AL West has to be the Houston Astros. After leading the division for most of last season, they withered at the end and barely beat out the Angels for the second wildcard berth. Unfortunately, for Houston, their bad ending carried over into 2016.

Since August 1 of last year and through the end of April, the Astros have posted a 20-34 win-loss record. May has been a better month though — 10-8 through Thursday. Although the offense has been productive, Astros pitchers went from allowing the fewest runs in the AL last year to the third most in 2016.

Fortunately, for Houston, the season is young. The return of  sophomore Lance McCullers from the disabled list and the improved performance of former Mariners Doug Fister should help the club, as long as the other starters can return to 2015 form. Otherwise, the Astros may find themselves tempted to be sellers just a year after being a buyer in the trade market.

In reality, it’s way too early for serious trade speculation. But, it’s fun to discuss. By the second-quarter mark, it’ll be much easier to identify who the serious contenders are in the AL West.

As of today, the Rangers continue to look like the best in the division. But, the Mariners are proving to be more competitive than most expected by improving in multiple areas.

At this time a year ago the Rangers were under .500 and down the board a bit in the division but got things together and eventually caught the Astros. That same Rangers club is very good again, despite a porous back end of the bullpen and a verison of Prince Fielder that shouldn’t even be in the lineup.

With Darvish back their rotation matches up well at the top with just about any in the circuit — and it’s better suited than that of the Mariners’ when it comes to shutdown October baseball — but may lack the depth, still, to put them over the top.  Expect GM Jon Daniels to make at least one starting pitcher acquisition this summer in addition to addressing their bullpen issues. The Rangers also can replace Fielder’s production with the return of Shin-Soo Choo thanks to rookie Nomar Mazzara’s emergence early in the year.

If you’re the Mariners you have to think about your club and your club only. Mariners fans should be eyeing the Rangers and only the Rangers. Houston is in a hole and have shown no signs of steady life. The A’s and Angels have roster issues beyond repair, thanks in large part to injuries that have occurred during the season’s first six weeks.

Offense
After the first month of play, the heart of the Mariners batting order had cobbled together an underwhelming .220/.304/.430 slash and their lead-off spot was even worse — .205/.298/.289. In recent years, such an inauspicious start would’ve derailed the club’s offense — and quite possibly their season. Not in 2016 though.

A comparison of how Seattle’s run-production has stacked up against all 30 major league teams since 2011 helps illustrate the ineffectiveness of past teams and the resiliency of this year’s squad.

Although this year’s club is in the middle-of-the-pack in several categories, they are doing well with the most important metric — scoring runs. The fact that Seattle could endure slow starts from several starters shouldn’t come as a surprise to anyone who’s paid attention to first-year general manager Jerry Dipoto‘s offseason moves.

By placing a strong emphasis on having a longer lineup and better on-base ability, Dipoto created a roster that can survive a key contributor — or contributors — struggling for a few weeks.

Just how much longer is the Mariners’ lineup? A side-by-side comparison of each segment of the batting order demonstrates its improved length — and quality — over last season’s edition.

Last season, the heart of the batting order was a very strong unit, even when Robinson Cano suffered through an uncharacteristically poor first half. Unfortunately, for the Mariners, the rest of the order was ineffective.

The bottom-of-the-order (7-9) was particularly awful. It ranked last in nearly every significant offensive category and formed a black hole where rallies went to die.

Depending on a concentrated group of players to generate run-production doesn’t work. Even good hitters inevitably encounter slumps during a long 162-game season. Do you remember how much Seattle struggled when Cano slumped prior to the all-star break last season? One player shouldn’t make or break a team’s daily offensive output.

That’s where this year’s roster differs from the past. Seattle was able to score runs — and win games — despite sluggish April production of Cano, Kyle Seager, Adam Lind, Leonys Martin, and Nori Aoki. How did they do it?

The rest of the lineup — Nelson Cruz, Seth Smith, Ketel Marte, Franklin Gutierrez, Dae-Ho Lee, and Chris Iannetta — continued to contribute by reaching base and keeping the offense churning.

Despite a slow start by Martin, the last three hitters in the lineup have combined for a .234/.304/.371 slash. That doesn’t sound imposing; it’s league-average. But, the ability of this group to collectively reach base has helped ignite and continue rallies. That’s a rapid departure from recent Mariners history.

There’s plenty of reason to believe the club’s ability to produce offensively will continue. Forget about the players — we’ll get to them in a second. It’s April and May we’re talking about and the Mariners are No. 2 in the American League in runs per game. The club’s offense always has ticked up once the weather warmed and the ball starts to travel some. Yes, they have benefited from some warmer-than-typical weather, but facts are facts.

As the weather warms even more so, expect the bats to remain at a higher temperature, and expect Lind and Gutierrez to join the party sooner than later. In fact, Lind has been heating up for over a week.

The power numbers from Cano aren’t sustainable but everything else on a rate basis is. Cruz has been a little bit better than some expected and there’s no reason beyond injury he’ll slow down significantly. I’d even wager on a power surge, even if it comes at the expense of a few points on the batting average and on-base percentage.

Seager has been among the game’s best hitters since April 30 and while that particular pace isn’t sustainable, he’s back to his all-star self — it’d be ridiculous if he didn’t make the team, by the way.

We had no idea what to expect from Dae-Ho Lee and perhaps his early production will fall back to something a little more believable but it’s not like we have anything meaningful from which to draw expectations.

Expect a little more batting average from Aoki and hope Steve Clevenger offers a little more offense so the club can make sure Iannetta gets the necessary rest so he can keep his on-base mark somewhere north of league average down the stretch. Marte has been steady after a slow start, but expect some ups and downs in his first full year in the bigs.

Smith is Smith; steady, professional, productive. The M’s need to get more from Gutierrez. Martin finished the first quarter with two strong games (and started the second quarter with another). A 100 wRC+ will do and Martin is just north of that now thanks to a power surge.