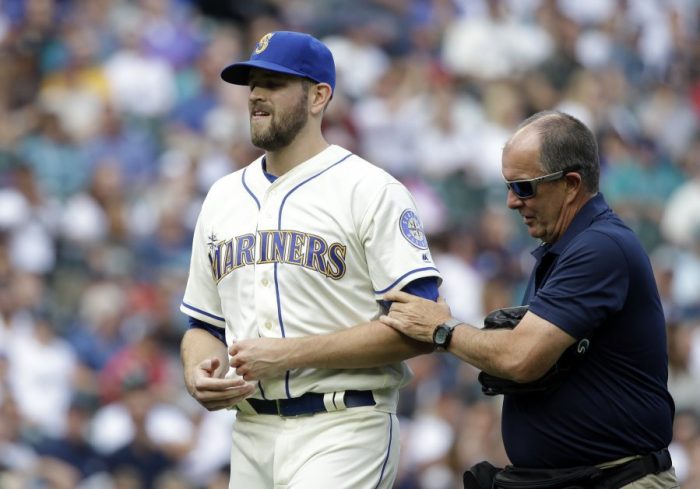 At the halfway point of the 2016 season, the rotation of the Seattle Mariners was in disarray and their bullpen ineffective. It looked as if their season was quickly slipping away, especially after going 10-18 during the month of June.

The first two parts of our Third Quarter Report Series analyzed trends within the American League West division and the Mariners’ offense, plus their pitching staff.

In this segment, we’re going to discuss the club’s roster. First, let’s discuss the toll injuries have taken on that roster.

Injury Impact
The loss of key players to injury is always a challenge, especially for a team on the fringe of contention — like the Mariners. When those losses occur in rapid succession to a rotation, it can be season-altering.

Seattle endured such setbacks throughout June and into July. During those two months, they were forced to endure without Felix Hernandez, Wade Miley, Taijuan Walker, and Adrian Sampson — Miley’s replacement.

Not only did the club have to scramble just to find healthy arms to start games, the bullpen was over-extended after being repeatedly called upon to absorb the workload of starters who routinely didn’t last six innings.

Since then, all but Sampson have since returned to action. But, Miley is now a Baltimore Oriole and Walker is starting games for Class-AAA Tacoma due to inconsistent performance.

Now, the club is facing another round of rotation uncertainty due to injury. Two other starters — Nate Karns and James Paxton — currently resided on the disabled list (DL).

Granted, Karns was relegated to the bullpen prior to his back strain, but general manager (GM) Jerry Dipoto recently signaled the club intended to return the right-hander to a starting role. Whether that would’ve been with the big league club or in Tacoma is unknown.

Yet, having Karns available right now would be an appealing alternative for a club that’s turned to Joe Wieland and Cody Martin to start games in consecutive weeks.

The outlook for Karns is unknown. Although he’s feeling better, Greg Johns of MLB.com noted that the right-hander hasn’t resumed a throwing program.

When Paxton went on the DL, his loss was much more significant to the team. Initially a replacement for Felix, the 27-year-old had become Seattle’s best starter prior to being struck on his pitching elbow by a line over a week ago.

Fortunately, the prognosis for Paxton is much rosier. He’s expected to be back with Seattle after a rehab start with the Rainiers this weekend.

A quick return by the big southpaw is absolutely vital. It’s difficult to envision a realistic scenario where the Mariners remain competitive without Paxton toeing the mound every fifth game.

The rotation isn’t the only component of the roster to be impacted by injury. Here’s a complete rundown of Seattle players on the DL.

After missing a year due to shoulder issues, fan-favorite Charlie Furbush will miss next season due to season-ending rotator cuff surgery. Getting the southpaw back into the bullpen mix would’ve been a welcome addition.

Help could be on the way for the bullpen though.

Former closer Steve Cishek and fellow relievers Tony Zych and Evan Scribner are currently on rehab assignments. Cishek is the closest to returning and will provide Servais with another late-inning option.

Cishek didn’t endear himself to Seattle fans by blowing a three-run save to the Chicago Cubs in a nationally televised game. But, he’s experienced in high-leverage situations and possesses a better track record than any other available option on the roster.

Zych’s fastball has been clocked in the 95-97 MPH range during three rehab starts. If he stays on track, he may not be far behind Cishek. Getting Zych back at this point of the season would be akin to adding a high-powered arm via trade.

Scribner will take longer to return since he’s been out all year. But, adding the 31-year-old in September would provide needed length during the last lap of the pennant race.

Considering the injuries the Mariners have sustained, their GM deserves credit for keeping his team close to contention. But, he doesn’t deserve all of the credit and he’ll be the first to say so.

When Dipoto took over as GM last September, he repeatedly praised the core of players that he inherited from his predecessor — Jack Zduriencik.

In reality, the best players on the Mariners are holdovers from the Zduriencik era. That’s why I chose to defend Zduriencik in January.

Should the Mariners have moved past Zduriencik? Yes. But, it’s fair to acknowledge that he didn’t leave the cupboards bare, at least on the major league roster.

That’s where Dipoto comes in. By building around the edges of the Zduriencik core, the new Mariners GM has given his team a chance to break their 14-season playoff drought.

That doesn’t mean the Mariners don’t have issue with their roster — they do.

From a roster flexibility standpoint, having a pair of one-position players at the same position — Adam Lind/Dae-Ho Lee — continues to be a challenge, especially when both are struggling at the plate.

Perhaps, recently acquired prospect Dan Vogelbach will be thrown in the mix after rosters expand to 40 players on September 1. But, barring injury, it’s unlikely management will yield significant playing time to an unproven rookie with the team in contention.

First base isn’t the only platoon that’s been ineffective lately. The corner outfield pairing of Franklin Gutierrez and Seth Smith has scuffled in the second half. Compounding the issue, neither player provides enough defensive value to overlook a prolonged slump. 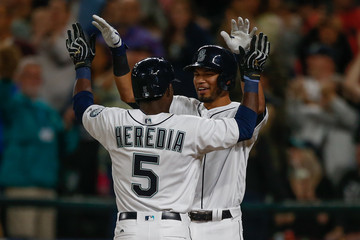 As with first base, replacement options are scarce. Some fans are pining for Guillermo Heredia to return from Tacoma after he slashed .280/.379/.400 during his 12 game/29-plate appearance major league debut.

At the very least, Heredia provides a significant defensive upgrade over Smith and Gutierrez. For now though, the club is willing to ride out the recent struggles of their veteran outfielders.

Another position facing challenges is shortstop. The struggles of Ketel Marte have highlighted the organization’s lack of upper level depth at the position.

When the season began, Luis Sardinas was expected to be the club’s backup plan at shortstop. However, it didn’t work out and he was traded to the San Diego on Monday. That’s where  Shawn O’Malley comes into the picture.

O’Malley has started 28 games at shortstop and 27 in the outfield this season. Lately though, the Richland, WA native spent more time at shortstop due to Marte’s recent stint.

At this time, employing a balanced approach with Marte and O’Malley time-sharing at shortstop would be the best course of action. It’s not an optimum strategy, but it’s a reasonable approach to handle the position for now.

I’ve outlined several challenges facing the Mariners, but there are bright spots too.

One major difference between Dipoto and his predecessor is his ability to pivot when dealing with adversity. The best example of that agility is the transformation of Edwin Diaz.

Transitioning a 22-year-old who was starting games in Class-AA ball in April into a high-leverage major league reliever by June would never had happened in the past. Not that quickly, at least.

Dipoto’s acquisition of Wade LeBlanc in late June is an example of several shrewd deals the 48-year-old executive has made within the last two months.

LeBlanc isn’t overpowering. But, he’s been a solid contributor who helped provide rotation stability during the last 40 games. His presence now looms even larger with Paxton and Karns unavailable and Walker ineffective.

Another new starter — Ariel Miranda — came over in the deal that sent Miley to Baltimore. Under different circumstances, the southpaw would likely be pitching in Tacoma if it weren’t for the club’s rotation issues. But, he’s been thrust into action as a stop gap for now.

From the outside, trading Miley at the deadline with no suitable substitute available seemed peculiar, especially after he delivered three strong starts leading up to the deal. But, the club decided he was longer a good fit.

Perhaps, the Mariners were onto something. Since Miley arrived in Baltimore, opponents have slashed .328/.370/.537 during starts against the southpaw in three starts.

Recent additions of Drew Storen and Arquimedes Caminero have been valuable contributors to the bullpen. Whether they can remain effective remains to be seen. However, they’ve stabilized the bullpen, especially during the Cishek’s absence.

The return of Mike Zunino from his minor league sabbatical not only strengthened the lineup, it upgraded the catcher position by pushing  Chris Iannetta to a backup role. Now, the club is deeper at backstop than it’s been in over a decade.

Although Mariners’ roster has a few blemishes, it’s kept the club competitive throughout the season. Dipoto may be using an inherited foundation. But, he’s built upon it quite well.