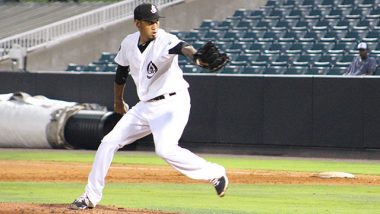 Right-hander Edwin Diaz will begin a new path as a relief pitcher, Prospect Insider learned Monday. The No. 3 prospect in the Seattle Mariners organization was developing as a starter, but perhaps the opportunity for the club to get Diaz’s fastball-slider combo to the big leagues sooner was too enticing on which to pass.

Diaz, the starting version, entered the season with a few obstacles, including continued development of his third pitch, a well below-average changeup that lacked consistency and movement. Despite signs of things continuing to move in the right direction, the club may see Diaz’s sleight build as yet another hurdle between his success in Double-A and what profiles as a viable starting pitcher in Major League Baseball. Strength has been a concern since Day 1 — he was drafted as 160-pound live arm and currently is listed at 165, but clearly has added some weight into the 175-180 range. Still, at 6-foot-3, one can understand the potential long-term ramifications.

Diaz was on a path that likely would have seen a big-league start as early as next summer. As a relief option, that timetable moves up as much as a full calendar year. And it doesn’t mean his prospects as a starter are done and gone. Many future starting pitchers — good ones, too — begin their careers in a relief role. Aaron Sanchez, now a strong starting pitcher in Toronto, spent last season in the bullpen. Roberto Osuna is the Blue Jays’ closer, and the club has not given up on his long-term chances to start. Historically, names such as Curt Schilling and Johan Santana have benefited from a year or two of relief work before pushing through to a rotation gig.

Those benefits include time to develop physically, which may be Diaz’s most critical step remaining. It also gives him a chance to face big-league hitters with a greater chance at success, all the while working on the changeup and fastball command.

Diaz remains in Jackson to start his new role, but don’t be surprised to see him move to Triple-A Tacoma before the warmer weather sets in for the summer. And depending on how well Diaz performs in shorter stints — which could be lights out, considering he’s flashed 93-97 mph fastballs and a plus slider in such appearances — there’s a non-zero chance he ends this season in the Mariners bullpen, particularly if the club is in the thick of a race to the postseason.

And we all know the M’s have depth issues in the bullpen with injuries to Evan Scribner, Tony Zych, Joaquin Benoit, Charlie Furbush and Ryan Cook.

2016-05-09
Previous Post: Age is just a number for the Mariners
Next Post: Good defense is catching on with Mariners