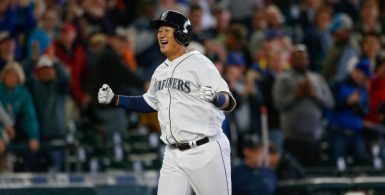 What exactly caused the Mariners’ downward spiral? Can the team get back on track and compete for a postseason berth? Considering the team’s struggles, how is rookie manager Scott Servais handling the adversity? We’ll get to all that in the Mid-Season Report Series, starting with the AL West standings and trends. Plus, a look at the club’s ability to generate offense.

Next, our league mid-season award winners:

Standings and Trends
The American League (AL) West division standings have shifted dramatically since our first-quarter review, when the Texas Rangers and Mariners were the only clubs with winning records and the Houston Astros were cellar dwellers thanks to an abysmal April. Here’s where the division stands at the midway point of the Mariners’ season.
Provided by Baseball-Reference.com: View Original Table
Generated 7/3/2016.

Back in May, I suggested that the division’s contenders and also-rans would be more apparent by the season’s midway point and that’s certainly turned out to be true. Both Texas and Houston flew by Seattle in the standings in June, while the Mariners have struggled to remain relevant.

The Rangers have continued to win despite losing three starters to the disabled list (DL) within the last 30 days — co-ace Yu Darvish, Derek Holland, and Colby Lewis. Credit for the club’s resiliency goes to the strong performances of co-ace Cole Hamels, fellow starter Martin Perez, and their torrid offense — ranked number-four in runs scored during June.

The Texas bullpen was middle-of-the-pack in the AL during June, which is actually an improvement over its first quarter stature. Sam Dyson has done relatively well since assuming the closer role from incumbent Shawn Tolleson. But, the club only has one “swing and miss” arm in the ‘pen — former shortstop and number-one overall draft pick Matt Bush, who wasn’t even a reliever or in professional baseball a year ago. This is an area ripe for an upgrade prior to the August 1 non-waiver trade deadline.

At the end of the first quarter, I referred to the Astros as “the most enigmatic team in the AL West.” Since then, only the Rangers have won more games than Houston in the AL.

The Astros flourished despite the ongoing struggles of reigning AL Cy Young Award winner Dallas Keuchel, who has seen his fielding independent pitching (FIP) and earned run average (ERA) skyrocket this season. Sophomore Lance McCullers has been the rotation’s best performer after getting a late start to the season due to shoulder soreness, while the rest of the staff has kept their team in games.

The key to Houston’s resurgence has been several extremely hot bats. In June, the club ranked second in the AL in on-base percentage (OBP), thanks to hot stretches by Luis Valbuena, Carlos Gomez, Marwin Gonzalez, Jason Castro, and Colby Rasmus. It’s highly unlikely that this group can sustain their recent uptick since all are performing well above their career averages.

Not surprisingly, the Los Angeles Angels and Oakland Athletics have become the also-rans thanks to a barrage of significant injuries. The only questions remaining for these clubs this season is how soon will they become sellers and who are they willing to move in deals?

Although Texas is certain to cool off, they continue to be the best team in the AL West. Making the club even more formidable is the fact that, as noted in the Rangers deadline deal preview, general manager Jon Daniels possesses the assets and resourcefulness to be a major player in the trade market.

Whether Houston can sustain their current trajectory with a less-than-optimal ace and a streaky supporting cast behind young stars Jose Altuve, Carlos Correa, and George Springer is debatable. Still, general manager Jeff Luhnow has also proven that he’s willing to wheel and deal at the trading deadline.

Despite the recent struggles of the Mariners and the June bounces of the Rangers and Astros, I expect the division race to tighten as the season progresses. A lot can change within the span of six weeks. Just ask fans in Houston and Seattle. Now, let’s turn our attention to the team from the Emerald City.

Offense
Although the Mariners struggled to win games during the last six weeks, offense hasn’t been the problem. A comparison between Seattle’s MLB run production rankings at the first-quarter mark and the midway point of the season demonstrates that point.

Run production has remained essentially the same in league rankings and the team actually scored slightly more runs since the start of the second quarter. So, what’s working for the club? A lot. Let’s start with the heart of the batting order inherited by general manager Jerry Dipoto.

Robinson Cano continues to demonstrate that last year’s sub-par performance was actually due to health issues and not age-related regression. Kyle Seager is on track to hit 20-plus home runs and repeat his career .263/.329/.440 triple-slash. Finally, Nelson Cruz has avoided the decline that many — including me — had predicted for the 36-year-old.

The main stars aren’t the only contributors this season. New supporting cast members Adam Lind, Leonys Martin, Dae-Ho Lee, and Chris Iannetta have improved the offense to varying degrees. They’ve blended nicely with the heart of the order, plus holdovers Seth Smith, Ketel Marte, and Franklin Gutierrez to create a consistently productive lineup.

In the offseason, Dipoto placed a strong emphasis on lengthening the club’s everyday lineup and improving the roster’s on-base ability in order to withstand a slumping player — or players. Overall, his plan has worked. But, that doesn’t mean that everything has gone as well as conceived.

Take a look at how the OBP of each position ranks against the rest of the AL. Although there are mostly bright spots, a few areas of concern do exist.

At shortstop, Marte has been effective at making contact. But, his OBP has tanked due to an extremely low 3.4 walk rate that ranks in the bottom-10 among qualified major league hitters. Since returning from the DL on June 6, the switch-hitter has been even worse (2.1-percent).

Fortunately, for the Mariners and Marte, there’s a good chance he’ll fix his on-base woes. The switch-hitter posted a 9.7-percent rate with Seattle during the second half of last year and 7.5-percent during parts of two seasons with Class-AAA Tacoma. Getting the 22-year-old back on track would provide a significant boost to the offense and provide Servais with another option to leadoff.

Both corner outfield positions under-performed during the first half. As a result, Dipoto shook up the roster by optioning left fielder Nori Aoki to Tacoma on June 24. The 34-year-old had battled inconsistency at the plate all season, particularly against left-handed pitching.

Considering Aoki’s career success against southpaws — .360 OBP — his struggles come as a surprise. This year, the left-handed hitter posted an anemic .244 OBP during 87 plate appearances against lefties. In Aoki’s place, the club is using Gutierrez and Smith in both corners spots, plus Cruz is getting more playing time in right field.

Aoki’s demotion not only affects the outfield. His absence changes the status quo at first base and designated hitter. When Cruz is patrolling right field, one of the members of the first base platoon — either Lind or Lee — is getting the opportunity to be the designated hitter, while the other plays first base.

Getting both Lind and Lee more consistent playing time may improve both players’ offensive numbers. Lind has been performing well below his career slash numbers and is sitting at .236/.266/.421 through the end of June. His struggles have spurred fan outcry for more playing time for Lee. Now, they’re getting their wish.

Lee has certainly created a swirl of excitement with his bat and his contagious smile. But, some observers believe that Servais’ shrewd use of Lee has helped obscure flaws in the the rookie’s game. In another six weeks, we’ll know whether that’s true and if Lind can salvage his season. For now though, management seems content to stick with their first base platoon setup.

Unlike recent seasons, the Mariners aren’t overly reliant on one or two hitters in order to score runs. Now, it’s a collaborative effort that’s been highly productive. That’s certainly a deviation from the norm in Seattle.