Can A Revamped Rotation Propel The Rangers To The Postseason? 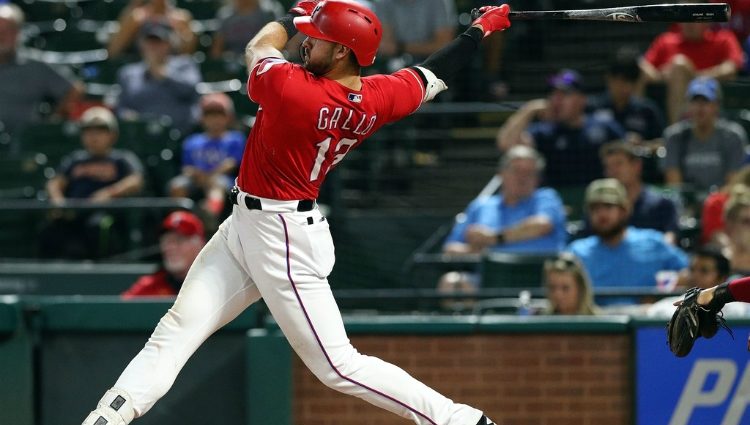 Texas Rangers GM Jon Daniels made upgrading its starting staff a priority last winter. But can Daniels’ revamped rotation propel the Rangers to the postseason?

Daniels was an aggressive shopper in the offseason acquiring former Cy Young Award winner Corey Kluber via trade and signing free agent starters Kyle Gibson and Jordan Lyles. Certainly aggressive moves for a club in dire need of rotation help. But most of the Ranger’s regular position players are back this year. Considering the offense’s lackluster performance last season, more of the same from the lineup would be problematic.

Last season, offensive mediocrity was a team effort. Just four Rangers with 300-plus plate appearances had an OPS+ over 100 (the league average) – Willie Calhoun, Shin-Soo Choo, Hunter Pence, and Danny Santana. The only AL clubs with fewer were Cleveland (3), Kansas City (3), and Detroit (1). And how crazy is it that the Texas Rangers, a club known for having a strong offense even when the club has a losing record, would be mid-pack in home runs in the same year MLB sets the all-time record for dingers in a season?

Not All Bad News

It’s not all doom and gloom in Arlington. The Rangers have a new ballpark and Calhoun, Choo, and Santana are still with the team. Calhoun is the most likely of the trio to demonstrate significant improvement in 2020. The 25-year-old has yet to play a full season, although he did manage to hit 21 home runs and .269/.323/.524 in 83 games last year. Amazingly, the Rangers’ projected starting left fielder suffered a broken jaw in Spring Training. Thankfully, he’s healthy and ready to go.

Choo, who will be 38-years-old before Opening Day, hit 24 home runs .265/.371/.455 and swiped 15 bags last year. The left-handed hitter has been remarkably consistent during six seasons with Texas. However, he’s slashed just .225/.323/.334 against southpaws since the beginning of the 2018 campaign. Considering his advancing age, it’s inevitable Father Time catches up with the South Korean. Rangers fans have to be hoping 2020 isn’t the year the team’s designated hitter falls off a cliff, offensively speaking.

For the first time since debuting in 2014, Santana made 500-plus plate appearances and he didn’t waste the opportunity delivering 28 home runs and 23 doubles with 21 stolen bases. Moreover, he demonstrated superb positional versatility playing everywhere in the field with the exception of pitcher and catcher. Still, 2019 was the first year the switch-hitter had an OPS+ above 64 since his rookie campaign. Will the Dominican Republic native repeat his 2019 success or revert to his previous norm?

A pair of newcomers could help elevate the offense. Daniels inked veteran infielder Todd Frazier, who hit 21 home runs and .251/.329/.443 and a 106 OPS+ with the Mets last year. Frazier’s presence in the lineup should help the team plate more runs this season.

Only Detroit’s catchers ranked worse than Texas’ in AVG and OPS. Former Ranger backstop Robinson Chirinos, who returns after a year in Houston, should improve the situation. Although he’s not a top defender, the 35-year-old has averaged 17 home runs and 107 OPS+ since the 2017 season.

The Rest Of The Story

Certainly, the additions Frazier and Chirinos and a complete season of Gallo should bolster the Texas lineup. But the team’s infielders could potentially be a drag on run creation. Last season, the unit was one of the least productive in MLB last season with a combined .306 OBP – only the Tigers (.294) and Royals (.291) were worse. Despite this glaring shortcoming, the only upgrade to the infield from outside the organization is Frazier.

Frazier could potentially bolster first base production as a platoon partner for Guzmán. While it initially appeared Texas signed the right-handed hitter to stabilize third base, the team could move the 34-year-old across the diamond when the club faces a left-handed starter and have him patrol the hot corner when righties start.

If Frazier were to play first base against southpaws, third base options include Santana, Isiah Kiner-Falefa, and Nick Solak. We’ve already discussed Santana not having a record of sustained success in the majors. Thanks to their youth, Kiner-Falefa and Solak represent a potential source of new plate production.

Since debuting in the majors in 2018, the 25-year-old Kiner-Falefa has appeared in 176 games with an average-ish .253/.315/.344 slash-line. Still, the right-handed hitter may prove more productive with regular playing time. Even if that’s not the case, his positional versatility provides value. The Hawaiian has started 60-plus career games at catcher and third base, plus 19 contests at second base and two at shortstop.

Also 25-years-old, Solak managed to slash .293/.393/.491 with a 123 OPS+ during a brief audition last year. Granted, the former Louisville Cardinal’s production encompassed just 135 plate appearances. However, if he continues to produce similarly, the club will find a position for the rookie whether it’s third base, second base, or in the outfield.

Certainly, the presence of Frazier and newbies Kiner-Falefa and Solak could fortify the infield’s offensive contributions. But the middle-infield remains an area of concern. Second baseman Rougned Odor and shortstop Elvis Andrus were two of the least productive hitters in MLB last year. Among 135 qualified hitters, Odor ranked 130 in OPS+ with Andrus right behind him at 131. This may be a make or break season for both players.

Adding recognizable names like Kluber, Gibson, and Lyles to join holdovers Lance Lynn and Mike Minor certainly gives the Rangers a chance to have a dominant starting staff. But it’s unclear what the newcomers will be capable of delivering this season, plus it’s conceivable Lynn and Minor take a step back.

Injuries limited Kluber to just seven starts last year, but he was one of baseball’s premier pitchers during the previous five seasons. During 2014-18, the 34-year-old averaged 32 starts with a 2.85 ERA and won two Cy Young trophies – he also finished top-3 in voting two other times. Which version of Kluber do the Rangers get in 2020?

Intestinal issues affected Gibson’s performance last year, but not his availability. The 32-year-old’s ERA slipped to 4.84, although he did log 160 innings in 29 starts. Just a year earlier, the right-hander set career bests in starts (32), ERA (3.62), and innings pitched (196.2). That’s the pitcher Texas fans have to be hoping to see this year.

Lyles split time between the Pirates and Brewers in 2019 delivering vastly different results with each club. In Pittsburgh, the 29-year-old posted a 5.36 ERA in 17 starts. After a deadline deal sending him to Milwaukee, he was far more impressive – 2.45 ERA in 11 starts. It’s worth noting the South Carolina native has bounced between starting and relieving throughout his nine-year career. His 141 frames last year represented his highest inning total since 2013.

This year’s Opening Day starter, Lance Lynn, and Mike Minor had career seasons in 2019 combining for 416.2 innings (51.6-percent of the rotation’s innings pitched) and a 3.63 ERA with each delivering over 7 bWAR. The only other clubs with two or more 5-plus WAR pitchers were the Nationals (3) and Astros (2). So why my concern with the duo?

Obviously, Lynn and Minor were studs in 2019, but both have a history of arm issues and logged career-high workloads last season. Am I suggesting certain regression? No, but neither Lynn nor Minor have enjoyed sustained excellence over multiple campaigns and both are on the wrong side of 30. For these reasons, feeling a bit apprehensive whether they can repeat last season’s success makes sense – at lease to me it does.

If any of the starting five were to falter, the Rangers may have a problem. The organization’s rotational depth includes an aging veteran and a stable of unproven youngsters. Edinson Vólquez, signed to a minor-league deal, missed 2018 after undergoing Tommy John surgery and pitched just 16 innings last year. Behind the 37-year-old are Kolby Allard, Ariel Jurado, Joe Palumbo, Tyler Phillips and Taylor Hearn. All are 25-or-younger with a combined 33 MLB starts.

Last year, the Rangers’ bullpen ranked in the bottom-third of the majors in strikeouts, plus walks and home runs allowed last year. Overall, Texas had 20 relievers throw at least 10 innings – second most in the majors behind the rebuilding Mariners (22). Spoiler alert: this is not a good thing.

Health issues have slowed two relievers expected to be in the mix – Joely Rodríguez and Brett Martin. Rodriguez, arguably the best offseason addition to the bullpen, has been dealing with a lat strain since April. The southpaw is throwing again, but not expected to be ready for Opening Day.

Martin, who is diabetic, tested positive for COVID-19 at the onset of camp. The team reports the 25-year-old was exhibiting mild symptoms with no projected return date. Let’s all hope Martin recovers quickly from the virus without further complications.

Despite the good work by Daniels and his staff did to bolster the rotation in the offseason, the Rangers face an uphill battle in the AL West and the AL wild card race. Is it possible Texas contends for the postseason this year? Sure, but a lot has to go right for a club that’s experienced three consecutive losing campaigns.

Offensively, the team needs youngsters like Calhoun, Kiner-Falefa, and Solak to take the next step in their career progression. At the same time, veterans Choo and Frazier must avoid age-related regression, while Odor and Andrus can’t bog down the lineup again with below-average performances. Otherwise, it’s unlikely the Rangers experience meaningful improvement in run production.

For the rotation to have a chance to be special, Lynn and Minor must duplicate their 2019 excellence with Kluber and Gibson resembling their 2018 versions. Furthermore, Leclerc has to be more consistent, while his supporting cast must preserve leads for the closer. Otherwise, the Rangers risk wasting any good effort put forth by the starting staff and the lineup.

Certainly, this year’s truncated 60-game season is like no other before it. Therefore, it’s possible some of the concerns I’ve expressed won’t be as important to the Rangers’ success as I expect they will be. Having said that, I suspect Daniels’ club is more likely to be deadline sellers than late-season contenders in 2020.

Follow Luke!
Luke Arkins
Luke is a native New Yorker, who grew up a Mets fan. After the US Navy moved him to the Pacific Northwest in 2009, he decided to make Seattle his home.

In 2014, Luke joined the Prospect Insider team and is now a contributor at HERO Sports also. During baseball season, he can be often found observing the local team at T-Mobile Park.