Want to get under the skin of a Seattle Mariners fan? Just say two words – Rafael Montero.

You see, a recent string of disastrous outings by Montero has turned the team’s fan base against him. Not only that, Seattle Times beat writer Ryan Divish suggests management is running out of patience with the volatile reliever. So much so that he may not last with the Mariners after the All-Star break.

The default answer to this question for many frustrated Mariners fans is “everything.” But that’s not really the case. A review of Montero’s Statcast profile suggests he’s an excellent pitcher capable of providing value to any team – including Seattle. 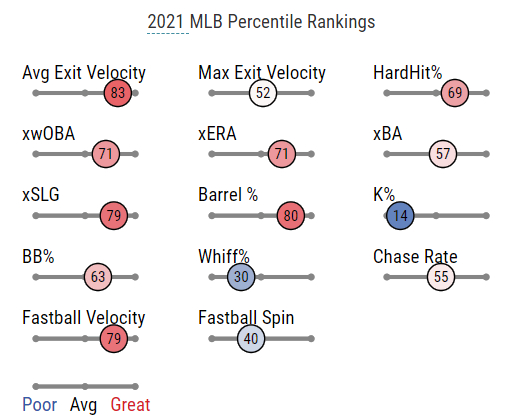 Still, Montero has been disproving the notion he’s valuable on a regular basis. So, why the wide gap between advanced metrics and the actual results he’s delivered?

I’m just a dumb blogger and can’t offer solutions to “fix” Montero or any baseball player. But after spending considerable time on Statcast Island at Baseball Savant, I did discover several interesting items worth sharing with you. Perhaps they can help us make sense of his maddening season in Seattle.

When we review Montero’s production, we immediately see a large discrepancy between his conventional and advanced statistics.

Without doubt, Montero’s old-school numbers are awful. His ERA, strikeout percentage, and opponent’s AVG rank in the bottom 10-percent of all MLB relievers. Then again, advanced metrics suggest he shouldn’t be as bad as the old school stats indicate or what fans are seeing with their eyeballs.

Montero’s expected batting average (xBA) and expected weighted on-base average (xwOBA) are close to or better than the MLB average. Moreover, his expected earned run average (xERA) is well below his actual ERA. These three metrics reflect quality of contact on batted balls by using exit velocity and launch angle. Therefore, they remove defense from the equation. This is an important feature to remember as we move forward.

Montero has been relatively successful at avoiding quality contact this season. However, the first-year Mariner hasn’t experienced positive outcomes as often as you might expect.

Per Statcast, Montero pitches have generated poor contact at a rate that’s actually better than league-average. That said, I can’t stop looking at a .221 AVG that’s third highest in MLB among relievers and nearly 100 points above normal.

Trouble With The Grounder

Montero has been an extreme ground ball pitcher this season with a 60.2-percent ground ball rate that’s 15th highest among relievers. Normally, generating grounders is a good thing. Not so much for Seattle’s mercurial relief pitcher.

It’s also worth noting starters Justus Sheffield (32) and Chris Flexen (31) are the only Mariners to permit more ground ball hits than Montero. In fact, 22 of the 40 hits he’s allowed have been grounders. No MLB reliever has surrendered more.

A closer look reveals Montero’s trouble with grounders weren’t caused by quality contact. In fact, 10 of the 22 ground ball hits he allowed were categorized as poor contact by Statcast and had an exit velocity under 90-MPH. Only 13 pitchers have more of this type of weak grounder – all are starters. Kansas City’s Brad Keller leads the majors with 16 and he’s faced over twice as many batters as Montero.

On those weak ground balls, opponents have a .323 AVG against Montero. Only two of the 13 starters just referred to had an AVG over .250 – Keller (.254) and Oakland’s Sean Manaea (.295). Realistically, Montero has experienced some bad luck on poorly-struck balls this season. But the 30-year-old has also played a role in creating his misfortune. Let’s discuss.

A result of Montero avoiding quality contact is an excellent 15-percent line drive rate well below the 23.6-percent league-average. But there’s a caveat to this good news that isn’t pretty.

Opponents have an .830 xwOBA on the few liners they’ve hit against Montero. This isn’t a good thing for a pitcher also receiving less than favorable outcomes on poorly struck balls.

Trouble With Men On Base

A review of Montero’s splits with and without men on base (MOB) reveals the native of the Dominican Republic has struggled with runners on base.

Obviously, being unable to weather difficult situations, like having men on the base paths, is problematic for any pitcher. Particularly someone acquired to be a late-inning reliever – like Montero.

Make ‘Em Miss, Or Maybe Not

With the exception of walk rate, Montero had significantly worse numbers with men on base. The stat catching my eye is his strikeout rate, which is attributable to a plummeting whiff rate.

Montero’s whiff rate with the bases empty ranks 53rd among 197 relief pitchers who’ve induced at least 100 swings with MOB this season. That’s pretty good. But, once again, we see drastically different results with traffic on the bases. His 17.1-percent whiff rate with men on base ranks 136th.

Just to reiterate the obvious, I’m not a pitching expert of any sort. But Montero’s repertoire merits discussion from a statistical perspective. That said, it’s difficult to ignore how the whiff rate for three of his four pitches is drastically lower when bases are occupied.

Montero has managed to induce more swings and misses with his sinker with men on base. However, his four-seam fastball, slider, and changeup delivered undesired results from a contact perspective.

Those lack of whiffs with men on base certainly affects Montero’s modern and conventional numbers. To illustrate this point, let’s look at the quality of contact for each of his pitch types using xwOBA.

The xwOBA on Montero’s changeup was actually better with men on base. But the performance of other pitches suffered considerably. Remember, xwOBA removes defense from the equation. Therefore, this issue has nothing to do with the fielders behind him.

While players in the field don’t affect xwOBA, the catcher calling pitches could theoretically influence outcomes of batted balls. Was that the case when Montero was on the mound?

Although José Godoy was included in the preceding table, he won’t be part of this conversation. The Venezuelan only caught Montero for 15 batters. Instead, let’s focus on the Mariners’ two main receivers – Tom Murphy and Luis Torrens.

The wOBA of opponents with Murphy and Torrens catching tells us bad outcomes occurred when either was Montero’s battery-mate. Yet, we see a large difference in xwOBA depending on who was receiving. This suggests something else may have been at play depending on who was catching. Based on what we’ve already covered, I focused on differences between the backstops when men were on base.

Based on xwOBA, Montero seemingly avoided damaging contact more often with Murphy catching in all situations. Although xwOBA rises above .300 with men on base, it’s below the .315 league-average for this situation. Conversely, when Torrens catches, there is a large delta in xwOBA. What might drive different results depending on the catcher?

The simplest answer is we’re dealing with a small sample size. Remember, Murphy has caught Montero for 85 plate appearances and Torrens 59. That’s not a lot. Putting that thought aside for a moment. let’s consider pitch selection when each player is behind the plate.

With Murphy serving as backstop, there were noticeable changes in Montero’s reliance on the four-seamer and sinker with men on base. On the other hand, Torrens (or someone in the dugout) seemingly called a completely different game depending on the base runner situation.

Do these changes in pitch selection mean anything? The dumb blogger isn’t qualified to answer that question. But the varying degrees of success Montero experienced with each pitch and how he employed them with different catchers is interesting – at least it is to me.

To be clear, I’m not suggesting any of Montero’s issues are driven by a particular backstop. To drive home this point, check out the following table illustrating the overall numbers of Seattle relievers when Murphy and Torrens are behind the plate.

As you can see, the stats are amazingly similar regardless of who’s donning the tools of ignorance. Why the outcomes are so different for Montero may be a byproduct of limited data or other issues better understood by the team than someone in the blogosphere.

While we’re discussing Montero’s supporting cast, we should consider the fielders playing behind him since they can affect the actual results. Statcast permits us to gauge the level of support a pitcher receives from his defenders with the outs above average (OOA) the defense accrues when he’s toeing the rubber. Currently, Adam Wainwright of the Cardinals has benefited most from his defense’s efforts with 10 OOA. Mariners starter Yusei Kikuchi is second with 9 OOA.

Conversely, only 22 pitchers have received fewer OAA from their defense than Montero’s -3 OOA. Of that group, only five are relief pitchers. Since OAA is a counting stat, starters should always dominate the top and bottom of this list.

Is Montero’s -3 OAA the result of how his team positions its fielders? Perhaps, but I’m not interested in placing any blame for his issues on his teammates. Furthermore, we should always remember defensive metrics are most useful in large samples. Therefore, it’s premature to make definitive conclusions by using OOA or defensive runs saved (DRS) for a reliever with less than 40 innings pitched this season.

Okay, let’s sum up what we’ve learned about Montero’s performances this season:

The following lowlight reel of four batted balls during Montero’s outing against the Blue Jays on June 29 reflects many of these items and what’s gone wrong for him and the Mariners this season.

The innings starts with a soft ground ball single between second baseman Dylan Moore and shortstop J.P. Crawford by Lourdes Gurriel Jr.. Then, Reese McGuire hits a 57.2-MPH dribbler back to Montero. The Mariners get the force out at second base but couldn’t turn the double play. At this point, there’s one out instead of two despite Montero creating two weakly hit balls.

True, but Montero then surrenders a line drive hit to Marcus Semien and a home run to Bo Bichette. That’s on him. After the game, manager Scott Servais said as much commenting that his reliever strayed from the game plan against Bichette.

I still believe Montero’s Statcast profile hints at a potential that could help the Mariners in the second half of the season. Yes, I realize many of you won’t agree with me. That’s okay and understandable. But any bad luck the beleaguered reliever has endured likely improves at some point. Still, whether Montero’s season changes for the better depends on his ability to execute and stick with the team’s game plan in the future – not luck.

After all, Montero’s future with the Mariners probably depends on process as much as results moving forward. The team’s data-driven front office has the same information I’ve shared today, plus much more. The metrics suggest Montero has underlying value. But as Divish aptly stated in his article, “Inability to execute and also shrugging off a game plan for a dangerous hitter isn’t something that endears a pitcher to a manager or general manager.”

This rings particularly true for a ball club that may unexpectedly flirt with postseason contention this summer. The margin for error will be limited, as will management’s patience with Montero. In the end, the Mariners benefit by the veteran turning around his season. On the other hand, if he doesn’t execute, his career in Seattle will be short-lived.