The Seattle Mariners’ injury-plagued starting rotation is falling apart. Naturally, the staff’s early season woes have fans clamoring for the Mariners to promote top pitching prospect Logan Gilbert. It’s an understandable sentiment. After all, Jeff Passan of ESPN is reporting that Seattle’s top prospect – Jarred Kelenic – will make his MLB debut later this week. Kelenic’s arrival has the potential to give a much-needed spark to a lineup that’s unproductive by any measure. Maybe Gilbert could do the same thing for a rotation that’s reeling.

Yes, Gilbert’s presence could provide an immediate boost to the rotation. He could also help a bullpen that’s been covering too many starts and innings lately. But it’ll take more than the Stetson alum to fix the rotation. Unfortunately, there’s a sabermetric red flag suggesting potential landmines await most of Seattle’s starters. I’m referring to Expected Weighted On-Base Average (xwOBA).

Weighted On-Base Average (wOBA) is an advanced metric that reflects on-field results by crediting a hitter for the manner he reaches base rather than simply treating all on-base events equally, as OBP does. A double is more valuable than a single, a home run is better than a double – you get the idea. Conversely, xwOBA uses quality of contact without the influence of defense to determine what should’ve happened to batted balls.

Think about it this way. Say Mike Trout mashes a screaming line drive and Mariners center fielder Kyle Lewis makes a stupendous play robbing Trout of an extra-base hit. The box score will say Trout made an out and his wOBA will decline accordingly. But the future Hall of Famer did everything right – it took a great play by Lewis to prevent a hit. For this reason, Trout’s xwOBA improves based on the quality of contact made (launch angle and exit velocity).

So, how can we apply the wOBA-xwOBA relationship to Seattle’s rotation?

We can use the difference in wOBA and xwOBA to help us determine whether the actual stats of Mariner starters accurately reflect their ability to do what’s necessary to succeed in the majors. Specifically, avoid hard contact and walks while generating strikeouts. We used a similar methodology in the offseason to demonstrate how the expected stats of Yusei Kikuchi hinted his skill level was much better than his on-field results. Let’s do it again with the Mariners’ 2021 starting staff.

The following illustrates the wOBA and xwOBA of Seattle’s primary starters and the difference between both metrics. Just to reiterate, a negative wOBA-xwOBA for a pitcher suggests on-field results may be better than what should have happened based on quality of contact.

The most negative wOBA-xwOBA belongs to Justin Dunn. The right-hander’s opponent .292 wOBA is below the MLB average (.308), which sounds like good news. It is to a degree, but his .355 xwOBA is a red flag. It ranks in the bottom 20-percent of 127 starters facing over 100 hitters this season.

Considering the large gap between Dunn’s wOBA and xwOBA, it’s tough envisioning him being a viable starter in a contender’s rotation without significant improvement. Fortunately, the season and the native Long Islander are both young. There is time to improve.

Before landing on the IL with a forearm strain, Marco Gonzales was off to an uncharacteristically poor start. Sure, it appeared the Gonzaga product was showing signs of breaking out of his early season funk before going down. But there’s no avoiding the reality his wOBA was ugly. So was his xwOBA, which ranks 124 of 127. A stunning development for Seattle’s Opening Day starter.

The final pitcher with a significantly negative wOBA-xwOBA is Kikuchi. However, the native of Japan has been digging himself out of an early hole lately. Look at how his wOBA and xwOBA for the season has steadily dropped with each recent start. 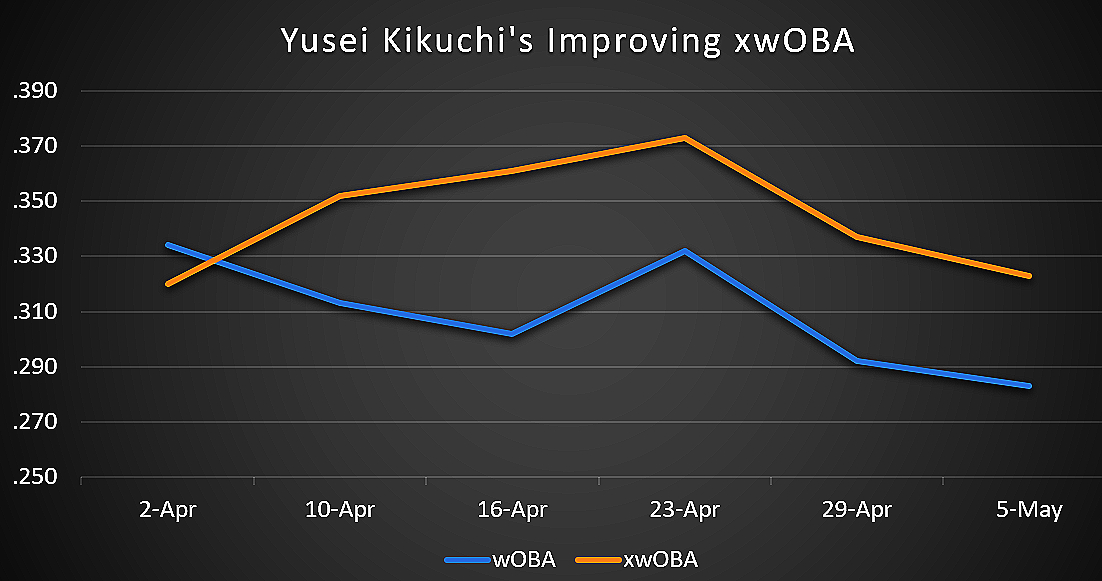 Based on his last three outings, Kikuchi is establishing himself as the anchor of the Mariners’ 2021 rotation. Yes, it’s a very small sample size spread over three weeks and way too early to make fiery declarations. But the southpaw’s improvement is certainly an encouraging development for a rotation desperate for encouraging developments.

The wOBA of Justus Sheffield looked respectable until recently. Regrettably, it’s closed the gap on an xwOBA that’s been hovering around the .350 mark. This isn’t a good thing for the Tennessean or the Mariners. As with Dunn, Sheffield is young (he turns 25 this week) and still evolving.

The least-heralded starter entering this season has been the staff’s most consistent arm. Chris Flexen has an xwOBA identical to Kikuchi’s, which is basically MLB-average for starters. Moreover, the right-hander’s .334 wOBA is higher than the league standard and above his xwOBA. This suggests to me that Flexen may be capable of delivering better results moving forward.

Just to refresh, barreled balls have an ideal combination of exit velocity and launch angle to create the best outcomes for hitters. Entering this week, the league was hitting .746 with a 1.318 wOBA on barreled balls. Hard-hit balls have an exit velocity of 95-plus MPH and have produced a .482 AVG and .609 wOBA this season. Bottom line: pitchers are trying to avoid barreled and hard-hit balls. Bad things happen when they struggle to do so.

Quickly, we see areas needing improvement for each Seattle starter – some have more challenges than others.

Dunn’s strikeout rate is slightly below average, as is the case with all but one of his rotation-mates. His barrel rate is a bit high too. That said, the biggest issue facing the Boston College alum is a 15.3-percent walk rate. Only José Quintana (17.4) of the Angels and John Gant of the Cardinals (17.4) are serving up free passes more often than Dunn among the 127 starters mentioned earlier.

Across the board, Gonzales’ 2021 numbers have regressed from an outstanding 2020 campaign. Not only is his 9.1-percent walk rate well above last year (2.5-percent), hitters are routinely making very loud contact. Only four starters currently have a higher barrel rate than the crafty lefty. Plus, his 47.7-percent hard-hit rate is eighth highest among peers.

Kikuchi’s hard contact numbers are in the red. But as noted already, his stats are trending in the right direction. His 22.7-percent strikeout rate doesn’t stand out when compared to league leaders Jacob deGrom (46.1-percent) and Gerrit Cole (40.2-percent). Still, Kikuchi does lead the staff in strikeouts and he’s managing to minimize damage caused by walks.

The amount of hard contact allowed by Sheffield is just above league-average, which doesn’t look that bad. But he’s allowed too many barreled balls thus far. Last season, his barrel rate was 3.7-percent, which tied him with Sonny Gray for third lowest in the majors. Only Hyun Jin Ryu (3.2) and Max Fried (3.3) were better.

Flexen misses the fewest bats among Seattle’s regular starters. Yet, he’s been stingy with free passes to opposing hitters. His 5-percent walk rate is top-20 among starters and ties him with former Mets teammate deGrom. Still, the California native’s hard-hit rate is an area worth keeping a watchful eye on.

So, what lays ahead for the Mariners? Gilbert probably joins the club sooner than later, which will be both helpful and really fun. But most of his future rotation-mates must significantly improve for the starting staff to rebound this year.

Kikuchi’s recent performance is cause for guarded optimism. So is Flexen’s emergence as a dependable rotation arm. But 35 games into the season, the rest of the current starting staff is enigmatic at best.

Perhaps Gonzales’ IL stint is short-lived and he returns looking more like the 2020 version of himself than what we’ve seen from the 29-year-old this year. Maybe Sheffield and Dunn become more consistent performers. Still, expecting so much from so many is a big ask.

Even if management were to transition away from the 6-man rotation it currently embraces so energetically, the Mariners don’t appear to have enough arms to form a truly competitive rotation this year without acquiring upgrades from outside the organization.

Realistically, the time for the front office to affect the outcome of the 2021 season was the offseason. So, unless the Mariners have mastered time travel, there’s no undoing the lack of improvements made to the major-league roster during the winter. And that’s okay.

This season has always been about the Mariners assessing the MLB readiness of previously promoted players and introducing their best and brightest prospects to the majors. In that regard, the team is on track even with the big-league club languishing. Yes, losing never goes over well with fans. But failure and on-field struggles are harsh realities that every rebuilding club (and their fan base) must endure.

Sorry Mariners fans. At least Jarred Kelenic is on the way.