Face it baseball fans, the sabermetric revolution is over. The nerds won. Advanced metrics influence roster moves, player development, and gameday strategy for all 30 MLB teams. Ironically, many local and national broadcasters resist using saber-stats despite knowing the clubs they cover depend on this information. Instead, booths across the league continue relying on generations-old conventional numbers when discussing players. It’s as if these holdouts prefer being stuck in a time loop over embracing the future.

Don’t get me wrong, I’m not advocating broadcasters altogether scrap conventional stats that were popular when your grandparents were your age. Baseball has a rich history and should preserve it. On the other hand, ducking innovation is a disservice to fans. Isn’t the goal of a game-caller to convey the most meaningful information available to the fan? If the answer is yes, advanced metrics, in some form, have a place in every broadcast.

Again, there’s no need to abandon conventional stats such as AVG and RBI for hitters or wins, ERA, and saves for pitchers. These standards, generally preferred by longtime fans, should remain part of our lexicon. That said, it wouldn’t hurt for broadcasters to use advanced thinking when using old-school numbers. Doing so would prevent providing misleading info to fans and might even open the door to introducing the new stuff.

Take RBI, for example. Driving in runs is a skill deserving of recognition. But the number of RBI a player has may not correctly reflect his ability. Other than the solo home run, it takes base runners for the batter to generate an RBI. Yes, the man at the plate has to do his part. But in reality, the quality of the lineup and its ability to provide RBI opportunities is a large factor rarely mentioned.

Consider this; the 100-RBI season has long been considered a benchmark of offensive excellence. Yet, Mike Trout, one of the best players ever, has accomplished the feat just three times since his 2012 Rookie of the Year season. A retired player, David Ortiz, did it four times during the same span and he hasn’t played since 2016. So has Trout’s teammate, Albert Pujols (because he had Trout to drive in). Does anyone for an instant believe either of these players were better than Mike Trout since he debuted?

Instead of touting a hitter’s RBI total, why not focus on the stats measuring the skills needed to drive in runs – reaching base (OBP) and/or slugging (SLG). If the player is adept at both skills, use OPS. Keep the RBI available for the diehards. But why not place the other stats on the screen also? Some local broadcasters are already taking steps in that direction. 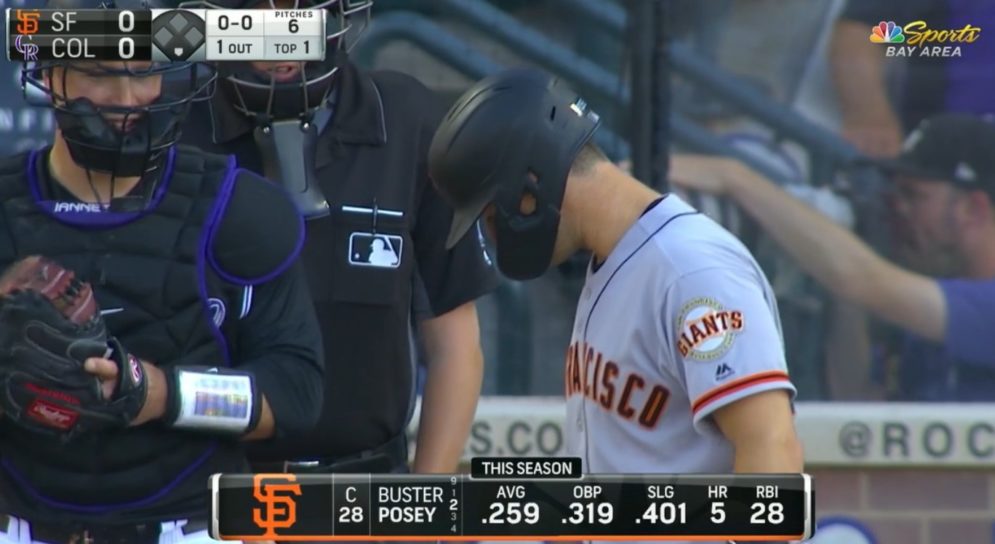 So how might broadcasters incorporate new-fangled metrics without losing the attention of the casual viewer? Use those new numbers when relevant to the game situation or as a positive reinforcement of a player’s achievements. Whenever possible, deliver the stat in a relatable context – compare a player to the league-average player in some way. Many advanced stats are designed to do just that.

On-screen graphics are a great way to interject advanced metrics into the consciousness of viewers. Weighted runs created plus (wRC+) quantifies a hitter’s overall production. Last year, Kyle Seager had a 118 wRC+. Since a 100 wRC+ is always average, that means Seager was 18-percent more productive than the average player. This screenshot from a Mariners broadcast last night says all that with a picture. 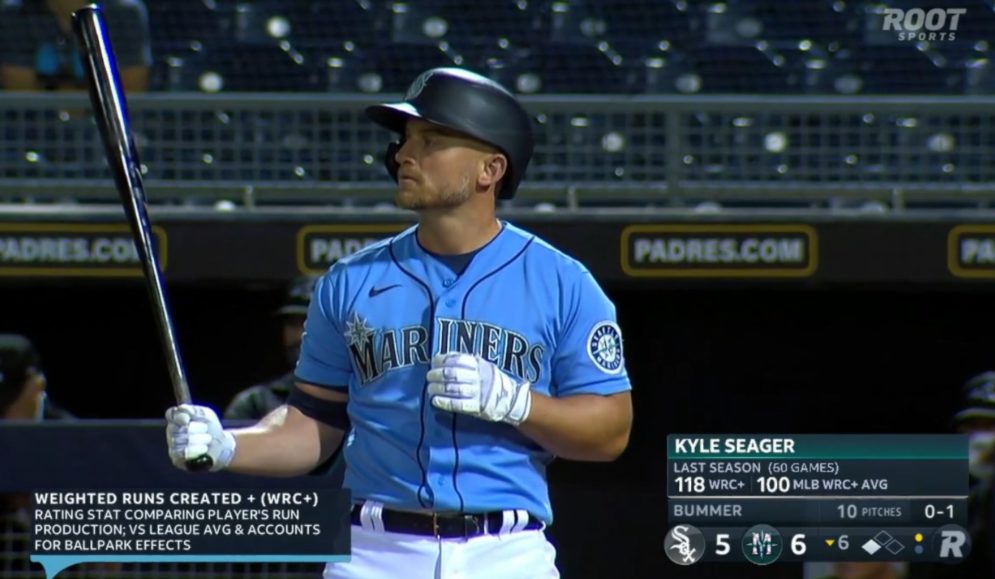 Seeing Seager’s wRC+ in this light is something Mariners fans will probably appreciate, even if they’re not seam-heads. Their veteran third baseman was above average offensively in 2020. Fans intuitively knew this already. But now, they have an over-arching modern stat quantifying his productivity. How can that be a bad thing?

Broadcasts can also utilize graphics to illustrate pertinent stats – old and new – together in a fresh manner. That’s something fans of all generations should be able to accept. The below screenshot from a 2019 Mets game provides such an example. It’s a nice blend of conventional numbers with a few newer ones too. There’s even room for a sponsor’s name. 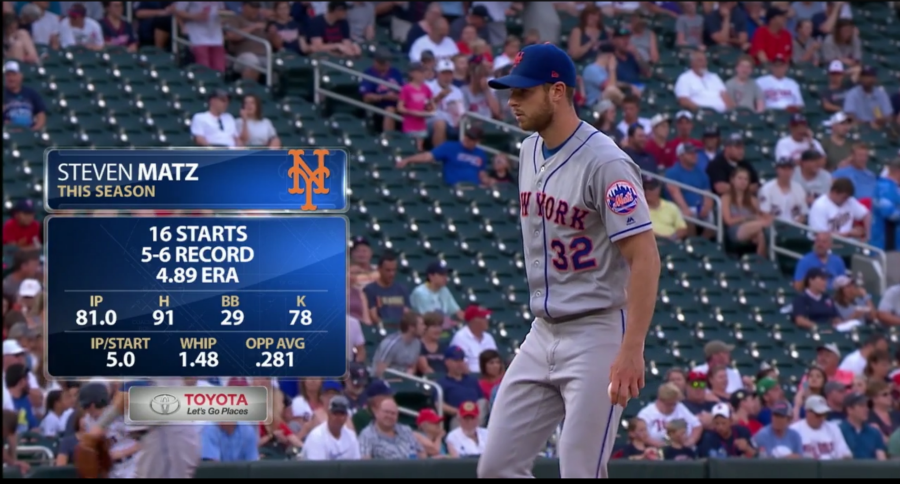 Next up is another example from a Giants game in 2019. What’s fun about this graphic is it’s a product of the opposing team’s broadcast. AT&T SportsNet Rocky Mountain does a fine job of doing everything possible to inform their viewers.

In this instance, we see different metrics included with the familiar stuff. The fan learns how Giants starter Drew Pomeranz fared using wins-losses and ERA and that opponents hit .305 against him. Also on display, Pomeranz’s pitch distribution and the AVG hitters produced against each of his pitches. That’s a lot of information in a snapshot. But it’s not overly nerdy and there’s something for everyone. 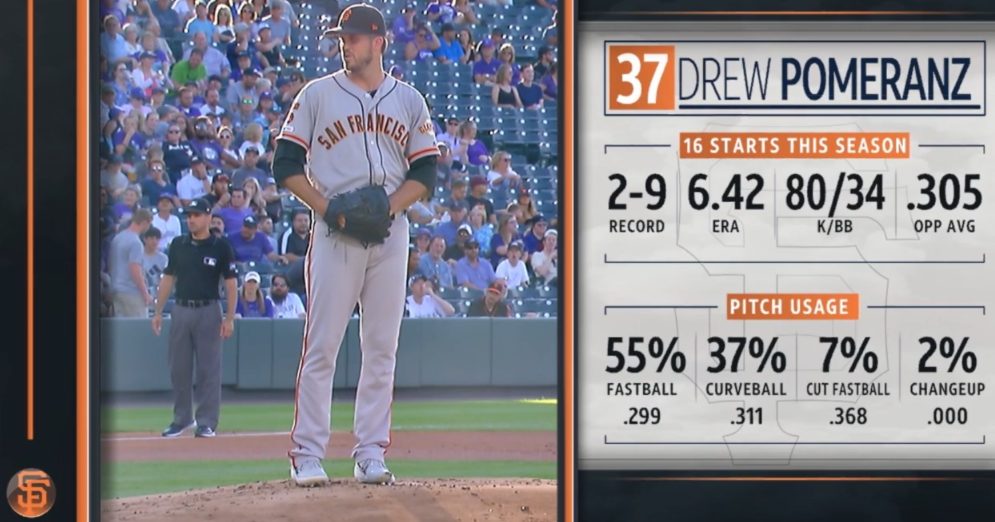 Our next example is something I saw last night. ROOT Sports Northwest did a splendid job of using advanced metrics and familiar conventional numbers to demonstrate how Seattle’s Opening Day starter – Marco Gonzales – ranks among peers within the AL West division.

Very quickly, the viewer is left with the impression Gonzales is much better than some at the national level perceive him. In fact, he’s been one of the best pitchers in the AL West over the past three seasons. This is not a narrative you’re likely to hear from a national outlet. Mariners fans will undoubtedly eat up this kind of information even though it’s not in the form of old-school numbers. 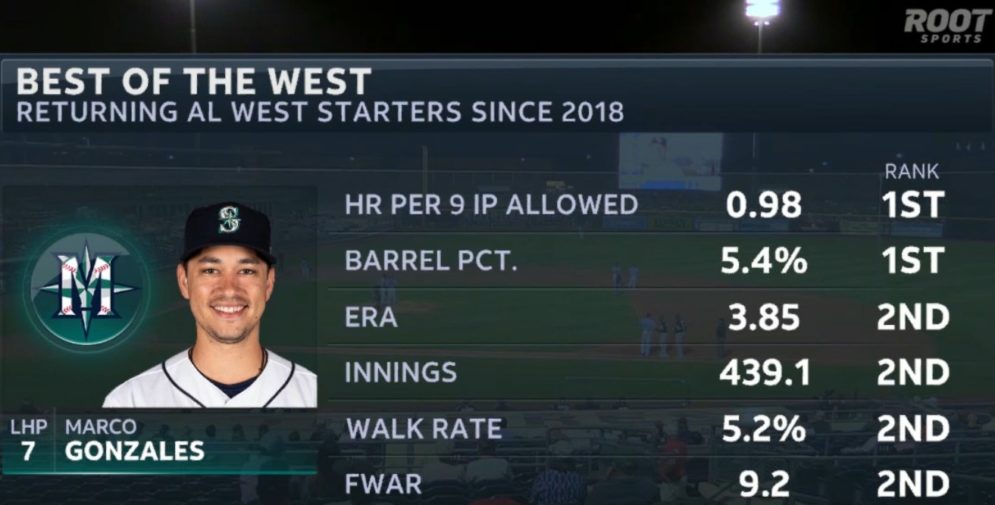 A stat tending to receive consternation from the old-guard is wins above replacement (WAR). In the preceding, we see the FanGraphs version (fWAR) in use. Like it or not, WAR is increasingly used by fans, baseball writers, and Hall of Fame voters. Now, it’s ever-so-slowly creeping into booths across the league. There’s no reason WAR couldn’t be made available more often during broadcasts.

Again, no big definition needed. Just note WAR captures the total value of a player. For a position player, that’s offense, defense, base running. From there, mention the all-time leaders in career WAR are Barry Bonds, Babe Ruth, Willie Mays, Ty Cobb, and Henry Aaron. Sure, some grumps will fixate on Bonds’ inclusion with the best to ever play due to alleged PED use. But the message should be clear to the open-minded – the greatest players in the game have the highest WAR.

If you haven’t noticed already, you’re seeing a bunch of screenshots from Mariners games. Their broadcasts provided a plethora of tasty examples on how to communicate advanced stats to the viewer in a smart fashion – particularly in the last year. ROOT Sports Northwest has also found innovative ways to use graphics to deliver snapshot identification of player trends – both good and bad.

Last year, a Mariners broadcast captured the difficulties the team’s former designated hitter, Daniel Vogelbach, had against fastballs later in the season. It was a quick and dirty look using batting average and whiff rate – the percent of misses on swing attempts. We even learn most of Vogelbach’s home runs came off fastballs. This was relevant and easily understandable information about a slugger, who wasn’t slugging for Seattle at the time. 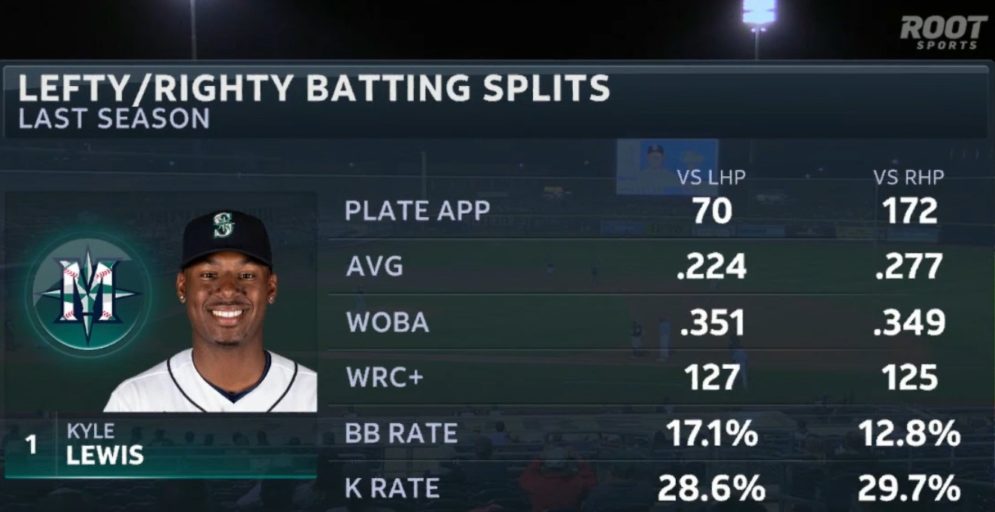 Former player turned analyst Mike Blowers astutely noted Lewis had so few plate appearances last year that his batting average likely would’ve normalized with more playing time. That’s player-speak for “it’s a small sample size.” This is an instance when sabermetrics and a player’s perspective combined to provide a quality product to viewers. The preceding screenshot doesn’t explain “the why” behind Lewis’ negative split. But the visual does give us reason to pause and consider what Goldsmith and Blowers were discussing.

It’s just not in the numbers arena where graphics can help make the broadcast more viewer-friendly. I found this particular visual of the Twins’ lineup and bench players to be quite useful. Not only do we see the batting order, the handedness of both starters and reserves is also presented. 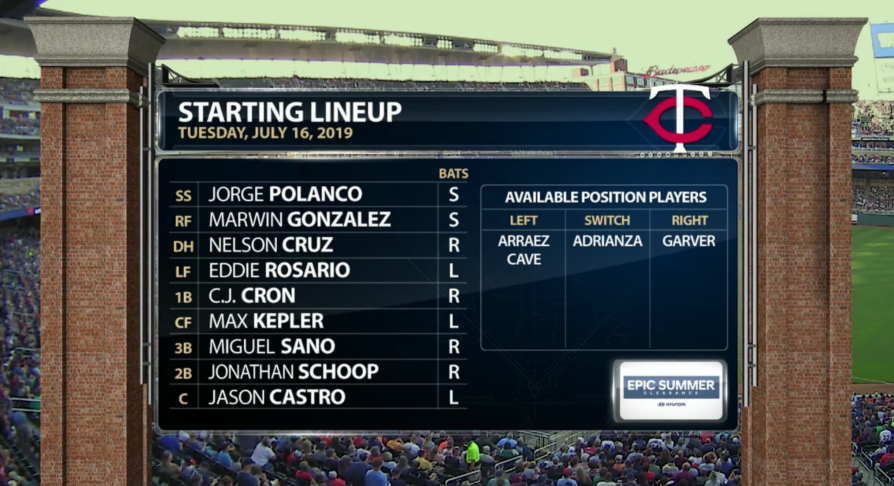 Beyond the numbers, there’s another element of game broadcasts that’s in dire need of upgrading across the league – inputs from either the analyst in the booth or the pre/postgame show. Too often, they don’t deliver their valuable insight in a useable form to the masses.

Consider this. One of my wife’s responsibilities as a paralegal is retaining expert witnesses for trial. The right expert for the job must possess three important characteristics. They have to be competent and have credibility with the jury. Most importantly, an expert witness must be capable of elaborating on their area of expertise, which is probably complicated, in a manner that jurors will understand. The same rings true with on-air baseball analysis.

Unfortunately, analysts frequently fall into the trap of directing their evaluation of a player at the knowledge level of peers in the booth or studio rather than the viewer on the couch. Discussing a hitter’s mechanics or a pitcher’s arm slot without context is tantamount to a nerd spouting off about run expectancy without explanation. Believe it or not, many casual fans have no clue what the analyst is trying to convey about the player.

There’s a simple solution to this challenge – at least I think it’s simple. Photographic training aids for the viewer. After all, a picture is worth 1,000 words. Here’s an example from a Mets broadcast in 2019 when former player and now-analyst Keith Hernandez discussed changes in the hand placement of Braves outfielder Ronald Acuña Jr. from two different seasons. 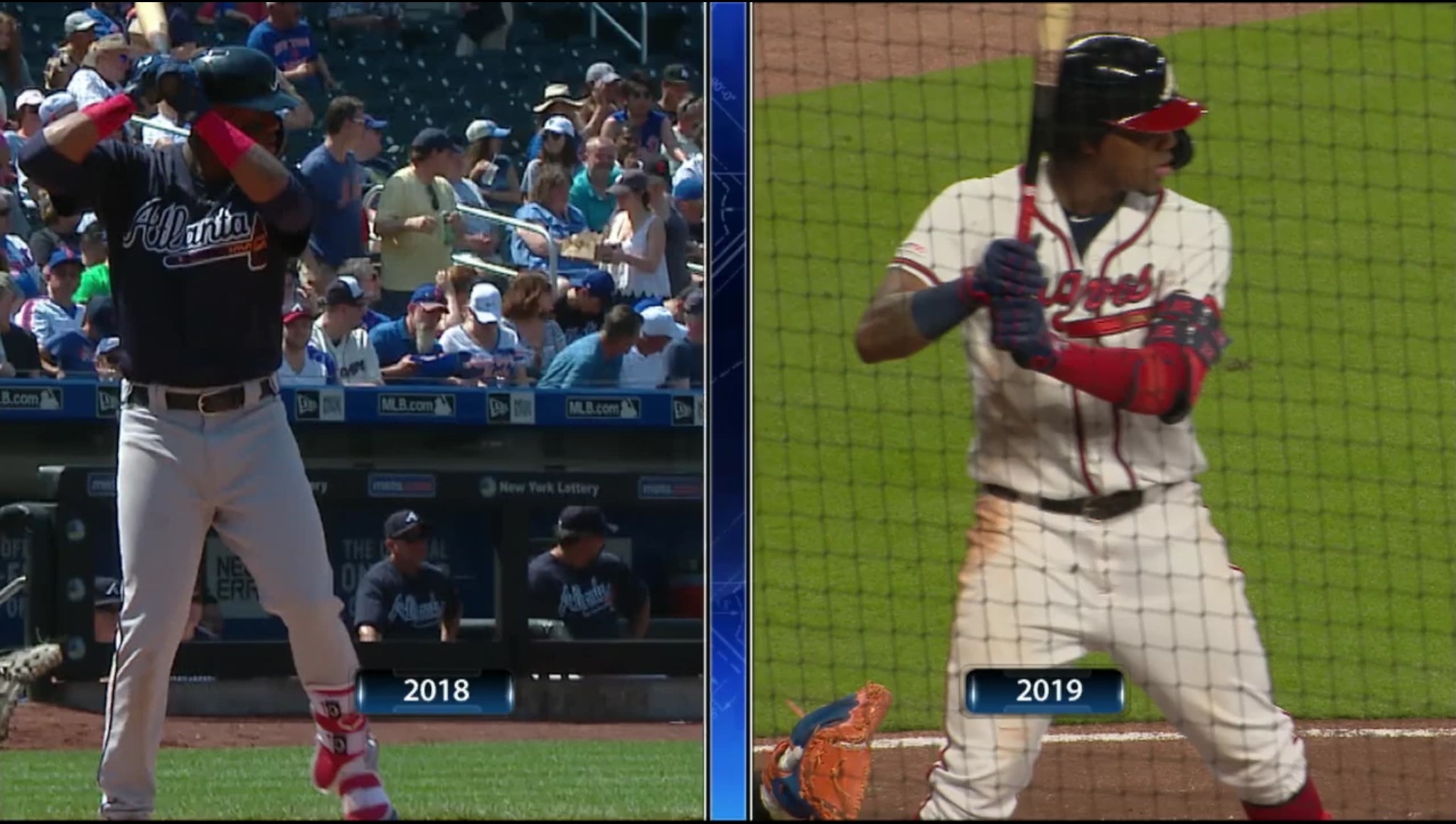 This is information the average fan can at least relate to on some level. From here, the analyst could potentially explain why the different hand positions mattered or how the different stances affected Acuña’s ability to make contact, hit for power, etc.

And isn’t it cool for a local broadcaster to be discussing an opposing player? Learning moments for fans don’t necessarily have to involve the hometown nine. Greatness should be recognized and discussed regardless of uniform.

Everything mentioned thus far is doable with the right mindset. Unfortunately, the greatest hurdle to enacting change may be convincing broadcasters to come along for the ride. A common reason heard to justify resistance to advanced metrics is the fear of alienating fans, who don’t want to understand the data. That sounds like an excuse.

If a booth crew can’t convey the information to the audience in a useful manner, that’s on them. Not the metrics. Choose the correct stats for a given situation, learn them, and then explain them. Our examples from AT&T SportsNet, NBC Sports Bay Area, ROOT Sports, and SNY demonstrated how to deliver advanced metrics with relative ease and in a manner that shouldn’t turn off fans not interested in the material.

In reality, broadcasters have a tremendous opportunity to generate interest and influence fans through the use of advanced metrics. This task can be accomplished without suffocating viewers with big-brain data and overly busy graphics. Having said that, an all-hands effort is needed to deliver that quality product. Specifically, buy-in from the booth, studio, and producers. Easier said than done in some locations.

The “that’s the way we’ve always done it” mentality towards the use of conventional stats won’t help grow a a sport in dire need of a fresher look. How would we have ever reached the moon with such a mindset? Including a few advanced metrics in baseball broadcasts is a smidge easier than space exploration.

Make it so, broadcasters.

A Big Decision On J.P. Crawford Awaits The Mariners

The Seattle Mariners face a big decision on J.P. Crawford, a Gold Glove defender yet to consistently produce at the...