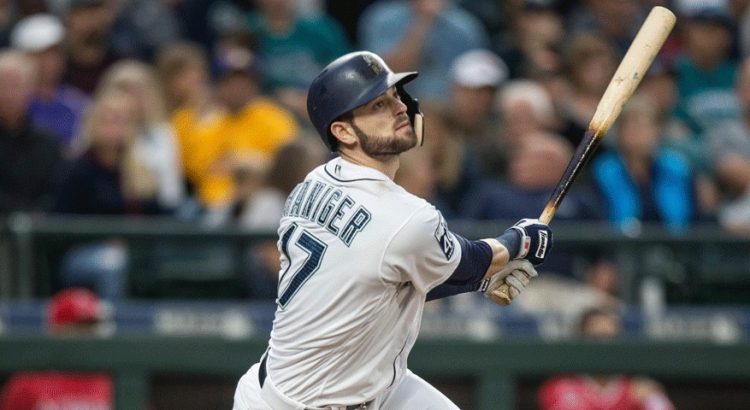 Haniger’s journey to the heart of Seattle’s lineup required perseverance and good fortune. Initially a 2012 first round draft pick by the Milwaukee Brewers, he was moved to the Arizona Diamondbacks in a July 2014 deal for veteran Gerardo Parra. At the time, Haniger was playing at the Class-AA level; that’s where he began 2015. But Arizona eventually demoted their new outfielder to High-A to get him more playing time.

Seeing himself being leap-frogged within the organization, Haniger decided to redo his swing to increase his power stroke. From there, his minor league career took off leading to a big league debut with the Diamondbacks in August 2016. After the season, he was dealt once again. This time, to the Mariners along with Jean Segura and Zac Curtis.

Healthy once again in 2018, Haniger is building on last year’s success. He’s currently Top-10 in the majors in home runs and OPS. Not only that, the national MLB media is taking notice of the Emerald City’s emerging star.

Haniger has arrived, but will he shine for a long time or quickly fade? Realistically, it’s too early to tell. After all, he has yet to play a full season in the majors. In fact, last night’s contest against the Los Angeles Angels was game-162 of his big league career.

Essentially, we have two choices. Impatiently wait for more evidence to determine Haniger’s trajectory or compare him to other late bloomers at a similar point in their career. The comparison option sounds more fun than waiting. Right?

Let’s start by comparing Haniger to recent notable late bloomers through game-162 of their respective careers. Each reached the milestone during their age-27 season. The only exception is Kevin Millar, who didn’t get there until his age-28 campaign. Please note the following table is sorted by OPS.

Still, there’s no guarantee Haniger reaches or sustains the long-term success of Donaldson, Cain, Willingham or Youkilis. By now, you’ve probably noticed how eerily similar his numbers are to the stat line of Bubba Trammell, a member of the Tampa Bay Devil Rays at the time.

Unfortunately, personal problems and bouts with depression shortened Trammell’s once-promising career. In the end, the Tennessee native played 130-plus games in a season just twice during his seven-year career.

Another late arriving player, who started strong only to fade quickly, was Morgan Ensberg. The University of Southern California product became a full-time player in 2003 with the Houston Astros. Two seasons later, Ensberg was a Silver Slugger winner and finished fourth in MVP voting. He played his last MLB game at age-32 in May 2008.

Just to be clear, neither Trammell nor Ensberg are a bust in my opinion. Life got in the way, as it does for all of us. But their relatively short careers after promising beginnings may give fans all-in on Haniger reason to pause.

What About Former M’s?

Okay, you get it. We can’t tell whether Haniger will become a world-beater or an afterthought in the minds of Seattle fans. So, let’s move on to a fun comparison. How does Haniger compare to other late-arriving Mariners?

Again, our table is sorted by OPS. Everyone listed hit the 162-game threshold during his age-27 season. This time though, a should-be Hall of Famer is included.

It’s common knowledge that Mariners icon and current hitting coach Edgar Martinez had a relatively slow start to his brilliant career. Could Haniger reach Edgar’s level of success? That’s a lot to ask from any 27-year-old. But a longer and more productive career than the remaining players on our list would certainly please Seattle fans.

Mickey Brantley wasn’t a major leaguer by his thirtieth birthday, although son Michael is currently a productive star with the Cleveland Indians. Casper Wells, best remembered by Mariners fans for being part of the infamous deal sending Doug Fister to the Detroit Tigers, had a brief four-year MLB career. Russ Davis made it to age-31 before hanging up his cleats.

Okay, it’s really not fair contrasting Haniger to Ichiro, who paved a path to Cooperstown after earning AL MVP and Rookie of the Year honors in 2001. What may surprise some Mariners faithful though; how favorably Haniger compares to the other right fielder.

Buhner had a great career after coming to Seattle in a July 1988 trade with the New York Yankees. “Bone” would remain with Seattle until retiring after the 2001 season with 307 home runs as a Mariner — third most in franchise history behind Hall of Famer Ken Griffey Jr. and Martinez.

I can’t speak for Mariners fans, but I suspect they’d be happy if Haniger finished with career stats somewhere between Bone and Edgar. If that were the case, a sitcom writer might be inspired to create a scene with a fictional Diamondbacks fan chastising the team’s owner for trading Haniger.

“What the hell did you trade Mitch Haniger for? He had 30 home runs, over 100 RBIs last year. He’s got a rocket for an arm. You don’t know what the hell you’re doin’!”

What’s Next For Mitch?

We’ve learned a strong start doesn’t necessarily lead to a long and productive career. But, if Haniger remains healthy, there’s a reasonable chance he anchors Seattle’s lineup through the club’s remaining four years of club control over him. If that’s the case, the Mariners may consider offering him a contract extension.

For now though, I suggest not focusing on the mundane business aspect of baseball and simply enjoy watching Mitch Haniger do Haniger things.