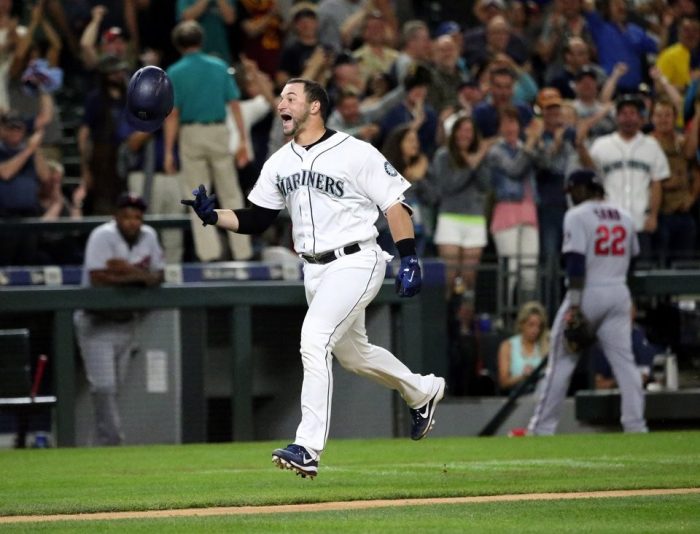 The emergence of Mike Zunino as a hitter qualifies as a one of several good news stories from an otherwise disappointing season for the Seattle Mariners.

After being an offensive liability for the majority of his career, Zunino was one of the most productive hitting catchers in the game this year.

Considering his great season, it’s reasonable to ponder whether Mariners general manager Jerry Dipoto would entertain the idea of signing Zunino to a contract extension.

I know. Some fans don’t view anyone with a .251 batting average as an asset to a lineup. But, we’re talking catchers; the least productive position other than pitcher.

To see what I mean, look at how Zunino’s production compares to catchers with 350-plus plate appearances. The number in parenthesis is his ranking against those peers.

It’s no surprise Zunino places high in the power department; his slugging prowess has always been well regarded.

Gary Sanchez (33) and Salvador Perez (27) were the only catchers with more home runs than the Mariners’ catcher. Only Sanchez (.531) had a better slugging percentage.

Using sabermetrics, Zunino fares well too — fourth or higher in wRC+ and fWAR.

Regardless of the measurement, the native Floridian had a great year at the plate compared to fellow receivers.

Zunino’s breakout season wasn’t only impressive when contrasted to backstops. He was an offensive force on his own ball club.

The following table illustrates his standing among teammates with 350-plus plate appearances.

Only Nelson Cruz and Mitch Haniger had a higher fWAR and wRC+ than Zunino and only Cruz and Kyle Seager bested him in homers.

How many of you realize Zunino had a better OPS than Robinson Cano and Seager? A better wRC+ than Jean Segura?

The cold reality is Zunino proved to be one of the best players on the 2017 Mariners. You could even argue he provided the best blend of offensive and defensive value with the exception of Haniger.

The notion of locking up Zunino certainly will cause apprehension among some fans. As noted earlier, the 26-year-old’s tenure with Seattle was rocky prior to this season — .632 OPS in just over 1,200 plate appearances.

That’s a fair point. There would be risk with extending Zunino now.

For the Mariners to commit multiple years to Zunino, they’d have to be confident he’d deliver enough value to justify such a deal.

Obviously, we don’t know what’s running through the minds of club management. However, Dipoto’s past statements and actions suggest an appreciation for what Zunino means to his organization.

A Matter Of Faith

When discussing the then-struggling catcher shortly after taking over as general manager, Dipoto told Shannon Drayer of 710 ESPN Seattle, “we still count him as a very large part of what we are doing in the future.”

For this reason, Mariners management designed a strategy to salvage the once promising prospect’s failing career. Their singular goal; fix Mike Zunino.

Prior to the 2016 season, the organization acquired two veteran catchers — Chris Iannetta and Steve Clevenger — so their reclamation project could spend as much time as needed with Class-AAA Tacoma.

Despite a bumpy start, which included a return to Tacoma in early May, the former Florida Gator finally broke through in 2017.

Assume for a moment the Mariners decided to pursue an extension of Zunino. What might such a deal look like?

The recent signing of another catcher may provide an answer to that question.

The Barnhart signing is significant because he and Zunino play the same position, are the same age, and had similar same service time entering this season.

Here’s a side-by-side comparison of the pair’s 2017 production.

Obviously, both Zunino and Barnhart are not clones of one another. The Mariners’ receiver has demonstrably more power than Barnhart, who has a better OBP (.335) over the last two seasons than Zunino (.327).

Defensively, Barnhart is better regarded for his ability to blocking pitches in the dirt, while Zunino holds the edge in pitch framing.

In my estimation, Zunino is the better player. Having said that, determining who is best is irrelevant for this discussion.

The bottom line is the Barnhart deal establishes the market for any potential contract negotiations between Seattle and Zunino’s representatives.

It’s easy to advocate a wait-and-see approach with Zunino. After all, 2017 was a career-year for a player with more bad history than good. Perhaps, he regresses next year.

Besides that, Mariners have their backstop under team control through the 2020 season. Why not wait another year before committing?

It’s understandable why some would urge caution regarding a potential Zunino extension. But, the price is only going to go up, if he repeats his 2017 performance. At some point, the player will prefer to wait for free agency.

On the other hand, reaching an agreement on an extension now would help stabilize projected cost for the club.

This is the first of Zunino’s three arbitration years. His salary will continue to escalate annually, even if his performance plateaus or declines slightly.

Another consideration is the dearth of catchers capable of providing both offensive and defensive value.

Sure, there are better hitting catchers than the 2017 version of Zunino. Buster Posey, Sanchez, Willson Contreras, and J.T. Realmuto are notable examples. But, there are few others and most are older.

There’s a lot to like about the Mariners extending Zunino and a few reasons to be leery of the notion. Having said that, a deal similar to Barnhart’s makes sense — at least to me.

A four-year extension would control Zunino’s compensation level and keep him with Seattle through his age-30 season and first year of free agency.

In return, Zunino gets the financial security of guaranteed money. That would seem appealing to a player who’s scuffled so much during his young career.

In the end, it’ll come down to how much confidence each party has in Zunino.

Will the Mariners want to see more before committing big money? Does Zunino and his agent think he’s better off testing free agency at age-29?

Waiting to see if both player and club can — or want to — agree on a deal adds a degree of intrigue to the hot stove season.

So does pondering what the 2018 edition of Mike Zunino might deliver with his bat.

Only 175 days and a wake-up until Opening Day.