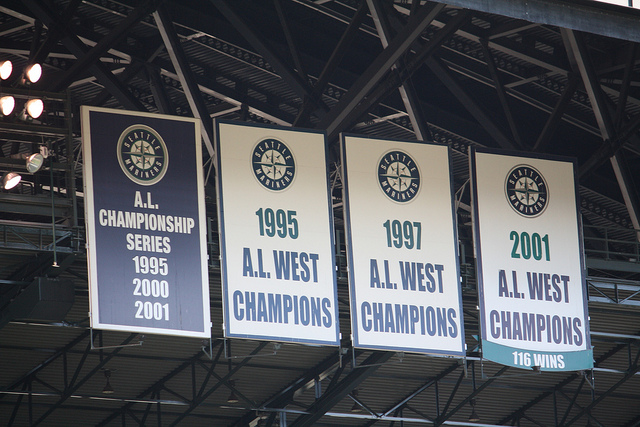 September is just days away and the Seattle Mariners are doing something that was unimaginable to many fans in May — contend for the postseason.

You see, the Mariners were eight games under the .500-mark on May 27 and had lost 80-percent of their projected Opening Day rotation to injury. Memorial Day was looming with confidence waning in the Pacific Northwest.

Since cratering in late-May, manager Scott Servais and his crew entered today’s action with the fourth best record (45-37) in the American League. Now, his club is within striking distance of a wild card berth with 30 games remaining.

Although the Mariners’ unyielding determination is inspiring, I’m suspect about their postseason outlook. It’s not that I’m a curmudgeon, although my wife may disagree. Rather, Seattle’s rotation is fueling my doubt. Please let me explain.

A Leash Too Short

The stark reality is the Mariners are relying on a collection of starters incapable of producing enough quality innings to sustain a contender.

In fact, prior to tonight’s action, Seattle ranked last in the AL for innings pitched/game start in August. 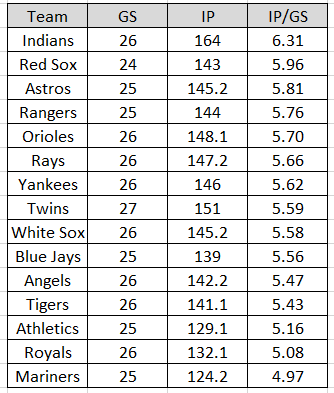 The lack of rotation length makes the likelihood of a September surge increasingly problematic.

Considering he hasn’t completed the fifth inning in any of his five starts — including last night’s outing against the Baltimore Orioles — Gonzales’ spot in the rotation is tenuous at best.

Prospect Insider founder Jason A. Churchill went as far as suggesting the Mariners should remove the former Gonzaga Bulldog before the weekend. Churchill’s choice for a replacement would be Sam Gaviglio; currently assigned to Class-AAA Tacoma.

In fairness, this season was Gonzales’ first since undergoing Tommy John surgery on his elbow. Under normal circumstances, it’s unlikely the former Gonzaga Bulldog wouldn’t be pulling major league duty until next year.

Unfortunately, 2017 has been far from normal for the Seattle Mariners.

In addition to Gaviglio, other candidates to replace Gonzales include rotation retreads from earlier in the season — Christian Bergman and Andrew Moore — and Max Povse. None of these options is particularly appealing.

As a starter with the big league club earlier this season, Bergman wasn’t particularly effective (5.70 ERA in eight starts). On the other hand, the 29-year-old’s 0.844 WHIP during the limited sample size of 10 relief innings is more appetizing.

Both Gaviglio and Moore had moments of grandeur with Seattle. However, the duo eventually faced struggles and are now teammates with the Rainiers.

Tacoma is closely managing Moore’s workload, which factors into his availability. Currently, he’s limited to just four innings during outings. The former Oregon State University star has logged 146 innings this season; his career-high is 163 from last year.

Povse began the season as a starter before the organization converted him into a reliever. Having said that, his last two appearances with Tacoma have come as a starter.

It’s possible the Mariners turn to Povse to start games this season. Perhaps, they’re merely stretching him out to use in long relief.

While getting better production from Gonzales’ spot is essential. The current crop of starters must do more to help stabilize the rotation.

Gallardo is the lone survivor from that projected Opening Day rotation and its biggest disappointment.

Initially pulled from a starting role in late-June, Gallardo reentered the rotation after the all-star break only to deliver similarly unsatisfactory results. In the second half, the 31-year-old has a 6.25 ERA in seven starts and opponents boast a .900 OPS against him.

Although initially slated to begin the season with the Rainiers, Miranda stepped in when Drew Smyly went down late in Spring Training. All things considered, the southpaw has been an asset, although he’s regressed since June.

In nine starts since July 5, Miranda’s ERA has ballooned and he’s surrendering more home runs. Perhaps, the 28-year-old is suffering from fatigue.

Miranda currently sits at 146 innings pitched this season; his career-high of 158 came a season ago. It’s worth noting, the sophomore logged just 70 innings with the Orioles system in 2015 and none the year prior while establishing residency after his defection from Cuba.

That brings us to Albers.

The 31-year-old has pitched admirably as an injury replacement for Paxton by maintaining a 4.20 ERA and averaging five innings through his initial three starts.

Whether the Canadian can sustain his marginal success or he’s destined to regress like so many before him remains unknown.

On a positive note, Ramirez has performed well since returning to the Emerald City in late-July.

In his last three starts prior to tonight’s outing, the two-time Mariner posted a 2.00 ERA and held opposing hitters to a meager .177 batting average.

Right now, Erasmo Ramirez is the ace of the Mariners’ rotation.

Let that sink in for a minute.

Certainly, getting back some combination of Paxton, Felix Hernandez, and Hisashi Iwakuma back from the DL would significantly improve Seattle’s playoff odds.

We know Iwakuma is further along in his rehab process than Paxton or Hernandez. The right-hander has recently thrown two bullpen sessions. Whether he’s ready to advance to the next stage of facing live hitters is unclear.

If Iwakuma were to return this season, he’ll be significantly limited from a pitch count or innings perspective. The 38-year-old hasn’t appeared in a game since a rehab start on June 19 and time is running out to build up arm strength.

That means the best hope for the Mariners rests with the injured duo of Hernandez and Paxton. Even if they were rusty or on a pitch count, either man would be the best starting pitcher on the team the moment they toed the mound. Whether either returns this year is a mystery.

As Greg Johns of MLB.com notes, both pitchers are making progress albeit baby steps.

Paxton and Felix will play catch again today in Seattle, then advance to throwing off mound on Friday or Saturday. Slow progress.

If the Hernandez and Paxton continue to make positive strides and eventually graduate to a rehab assignment, it’s plausible they could return to the Mariners in mid-September.

While the Mariners await the return of their injured stars, the club will have to make do with their current cast in the rotation. In the interim, the club will turn to wave of relievers to augment the starting staff once rosters expand on September 1.

Seattle optioned Dan Altavilla to Tacoma yesterday, but the hard-thrower is certain to return in the near future. Fellow power-arm Thyago Vieira is another strong option for call-up.

Ryan Garton and Zac Curtis are the two remaining relievers on the 40-man roster; each could see September action. Acquired from the Tampa Bay Rays earlier this month, Garton is making multiple-inning appearances for Tacoma and capable of missing bats.

Curtis made three appearances with the Mariners earlier this year, but spent the rest of the season with Arkansas. During his last outing with the Travelers, the lefty matched his career-high for innings pitched in a season. This will likely affect his readiness next month.

Tony Zych is out with a flexor bundle strain in his right elbow. The 26-year-old underwent offseason on his biceps tendon and, as Ryan Divish of the Seattle Times noted, Zych was experiencing a decrease in fastball velocity and lingering soreness after appearances.

Getting Zych back would help deepen a bullpen expected to receive plenty of work in September. Nevertheless, the University of Louisville alum’s recovery timeline remains unknown.

If healthy and effective, adding Shae Simmons and Evan Scribner to the bullpen would be beneficial. Acquired in the offseason, Simmons has yet to appear in a regular season Mariners game. Scribner has been lost to the club since suffering a flexor bundle strain in late-April.

Both Scribner and Simmons are currently on rehab assignments, but not on the 40-man roster. The club would need to clear space for either pitcher to join the big league club.

There are other relief options in the minors. As with Scribner and Simmons, the Mariners would have to find a way to add them to the 40-man roster first.

Although currently unlikely, Cody Martin, Ernesto Frieri, Evan Marshall, and Dean Kiekhefer are possibilities. An injured big league reliever could change things in an instant though.

The tenacity of the Mariners is impressive. Having said that, I can’t fathom the club snapping the longest active postseason drought in MLB without Hernandez and Paxton.

Adding more relief arms in September will help, although there’s no guarantee the newcomers can measurably improve the bullpen or prop up the scuffling rotation.

Sure, quantity can compensate for a lack of quality in some situations. However, I’m skeptical whether that approach works in a heated postseason race.

It’s worth noting the Mariners’ competition will be stacking their roster with new arms too. Moreover, all of those clubs begin September with a better rotation — even the bad ones.

Honestly, I’m not convinced waiting for Felix and Paxton is a viable option.

Expecting the totality of Ramirez, Miranda, Gallardo, Albers, Gonzales, and others in Tacoma to keep the rotation afloat is an unreasonable expectation. They haven’t been able to do so in August. What will be different next month?

Perhaps, the second-year GM can snag a starting pitcher to help his club stay alive.

If Dipoto is unable to add another arm or the starting staff can’t hold on until the return of Felix and Paxton, the Mariners are on course for a September swoon.

That’d be an unfortunate end to a remarkable season marked by unyielding perseverance.