Mariners After The Deadline: Rotation And Bullpen 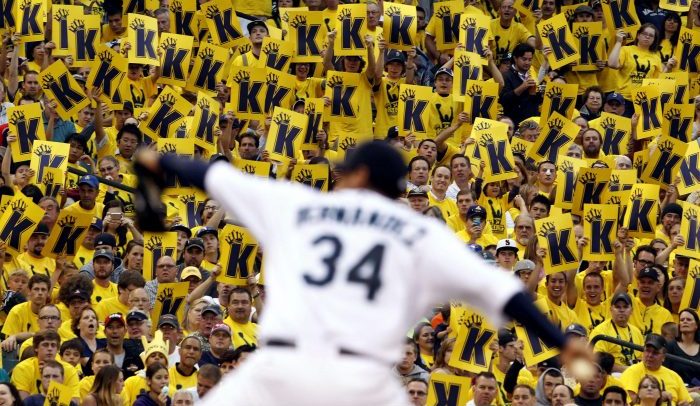 The MLB non-waiver trade deadline has come and gone and the Seattle Mariners have a realistic chance of reaching the postseason.

Yes, the Mariners have blown an 11 game lead over the Oakland Athletics in the wild card race. Nevertheless, Seattle retains control over their own destiny.

Now that the dust has settled, the issue facing the Mariners is whether they’re good enough to earn a wild card berth.

Yesterday, we reviewed Seattle’s run production, which has been sluggish for over a month. Now, let’s turn our attention to the starting rotation and bullpen; two key elements behind the club’s success thus far.

The staff has been a pleasant surprise to date. The following illustrates how Seattle stacks up in the AL since Prospect Insider’s late-May review of the rotation and bullpen. 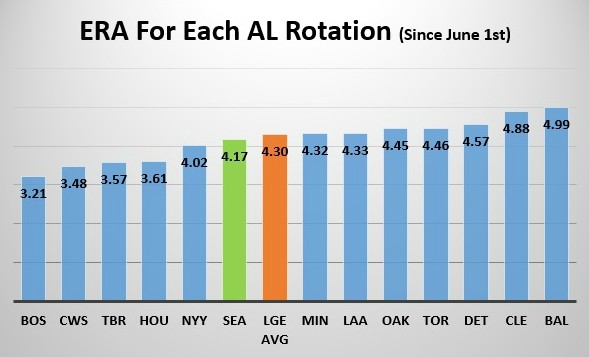 The rotation has been solid enough to consistently deliver competitive outings for manager Scott Servais with the exception of one very familiar name: Félix Hernández.

During his previous two seasons, Hernández missed significant time due to injury. In 2018, King Félix has been healthy. Unfortunately, he’s been inconsistent and ineffective. So much so fans and local media are deliberating whether Félix should even be on the team.

To see what I mean, here’s how the main five starters have performed since June 1. The table is sorted by xwOBA. As you can see, Hernández has fallen from Opening Day starter to the bottom of a slightly better-than-average rotation.

King Félix isn’t the only starter to scuffle lately. Wade LeBlanc has encountered difficulties too. The southpaw has failed to complete the fifth inning in four of his last 11 starts and has seen his ERA jump a full point since early June.

Right-hander Mike Leake doesn’t blow away opponents with overpowering stuff. As a result, he’ll occasionally get into trouble he can’t escape. Having said that, the 30-year-old generally avoids imploding and has completed six innings in 16 of 22 starts.

James Paxton remains the staff ace. That was clearly on display last Monday night when “Big Maple” out-dueled Houston’s Gerrit Cole in a 2-0 win over the first-place Astros.

Paxton had been out of action 17 days due to a back issue. But he returned without a rehab start to blank the defending World Series champions for seven innings.

The biggest and most fun surprise of the 2018 rotation is Marco Gonzales. The former Gonzaga Bulldog had been a number-one draft pick of the St. Louis Cardinals in 2013 and even pitched in the playoffs a year later. However, he underwent 2015 Tommy John surgery and didn’t truly return to form until this season.

Gonzales appears to be getting better as the season progresses. Maybe it’s just the last of his rust falling off or an increased sense of confidence. Whatever the reason, Marco has surprised many baseball observers in a good way, including this writer.

As noted in our recent rotation trade target piece, the Mariners are likely to regulate Gonzales’ workload for the remainder of the season. If he were to make 10 more regular season starts and average six innings/start, he’d surpass 180 frames. That’s nearly 20 more than his career-high set in 2014.

The bullpen has slipped since we last checked in on them at Memorial Day. Seattle’s combined reliever xwOBA back then was .305 and top-5 in the AL. Now, their .321 xwOBA is only tenth best in the league.

A few pitchers have struggled and that’s alarming with just eight weeks left in the season. But there are reasons for optimism too.

Here’s how the main Seattle relievers and the team’s most recent acquisitions have performed since the beginning of June. Chasen Bradford is with Class-AAA Tacoma, but he’s included since he’s the most likely player recalled if the team needs reinforcements.

Considering home many close games the Mariners have played this season, one could make the argument Edwin Díaz is the team’s most valuable player. Even if you don’t agree, the right-hander is definitely among the best closers in baseball.

Although his numbers haven’t been inspiring since his arrival in late-May, Alex Colomé has been better lately. Over the past month, the right-hander has a .296 xwOBA and opponents are hitting just .209 against him. During that span, Servais has been turning to the six-year veteran more often to set up games for Diaz.

James Pazos is quietly having a breakout season. Certainly, his decreasing strikeout rate and fastball velocity merit observation. Perhaps there’s an underlying reason behind the change. On the other hand, he’s delivered outstanding results.

Middle-reliever Nick Vincent has experienced a bumpy season interrupted by a June groin injury. The 32-year-old is still a solid contributor, but he’s a fly-ball pitcher and his home runs/fly ball rate (9.6%) is nearly three times higher than last season (3.3%).

The three new guys each possess different skill sets that benefit Seattle during their playoff chase. As we noted last week, Tuivailala is particularly tough on right-handed batters. Conversely, Duke has is extremely effective against lefty bats.

Warren is adept at missing bats, plus capable of going multiple frames. The 30-year-old has gone two-plus innings on four occasions this season.

Undoubtedly, the Mariners’ bullpen is better than it was before the arrivals of Colomé, Tuivailala, Duke, and Warren. Think about this for a moment — half of the current bullpen wasn’t with the organization 10 weeks ago.

On the other hand, the rotation is an enigma with the potentially hamstring Seattle’s postseason outlook.

Hernández faces the Toronto Blue Jays tonight. All eyes will be on the former Cy Young Award winner after lasting just 2.2 innings and surrendering seven runs in his prior outing.

If the team opts to move King Félix out of the regular rotation, they may turn to Erasmo Ramírez. The 28-year-old began the season as the Mariners’ projected fifth starter, but he suffered a severe muscle strain in April after just two starts.

Ramírez is currently rehabbing and threw four innings for Class-AA Arkansas Tuesday night. The right-hander struck out six and gave up one run during his 66-pitch outing. It’s possible he’s inserted into the rotation as soon as next week.

The success of LeBlanc this season is a good news story any fan can appreciate. The 33-year-old bounced around MLB, playing with seven teams since debuting in 2008 and spending the 2015 season in Japan.

Still, LeBlanc has a 5.14 ERA and opponents are slugging .504 in his last six starts dating back to July 3. Is this the beginning of a regression we’ve discussed before or simply a minor bump in the road for the veteran?

If LeBlanc proves less reliable than he was earlier this season, Servais and pitching coach Mel Stottlemyre Jr. would have another challenge to navigate through.

The workload of Gonzales and Paxton will be under constant scrutiny for the remainder of the season. We’ve already discussed the challenge facing Gonzales.

Paxton’s issue is different from Marco’s. He’s never made more than 25 starts in a season since debuting in 2013. The big southpaw currently has 21 after missing two due to a back issue that appears resolved for the time being.

Keeping Gonzales and Paxton healthy and available is paramount to Seattle’s chances of reaching the postseason AND making noise once in.

Barring unforeseen circumstances, the starting staffs of the Mariners and A’s will determine which team makes the postseason and which one comes excruciatingly close before missing out on meaningful October baseball. At the moment, that gives Seattle the edge.

That’s good news for the Mariners. All they have to do now is perform and stay healthy.