In his first MLB season, George Kirby has evolved into one of the best starting pitchers on the Seattle Mariners. Kirby’s development has been so pronounced since returning from the minors on July 26. he’s now a strong candidate to be part of Seattle’s postseason rotation. That’s assuming the franchise finally ends its 20-season playoff drought early next month.

Kirby’s overall season stats make it abundantly clear he deserves to be in the conversation about postseason starts this year. The rookie is top-three among Seattle starters in multiple categories including ERA, FIP, K/9, BB/9, and fWAR. The following is sorted by fWAR.

Without doubt, Kirby’s presence in the rotation has been vital to the Mariners’ second-half surge and postseason pursuit. Still, what fascinates me about his breakout campaign is he’s excelling despite opposing hitters enjoying a great deal of ground ball success against the 24-year-old.

Trouble with the grounder

To see what I mean, check out the following table illustrating the opposing hitter AVG against Kirby for each type of batted ball tracked by Statcast – ground ball, fly ball, pop-up and line drive. Also included, the MLB AVG for each category.

Kirby is achieving favorable results when opponents hit fly balls, pop-ups, and line drives. But as you can see, hitters have been disproportionately productive on ground balls. Not only is the Elon alum’s opponent AVG on grounders significantly above the league average, it’s actually the highest among MLB pitchers with at least 100 ground balls allowed.

Considering Kirby boasts a 47.4% ground ball rate that’s top-30, having an unusually high opponent AVG on grounders could potentially be problematic for the right-hander. Yet, it hasn’t affected his overall success this season. Hence, my fascination. With this in mind, let’s dig into a few numbers to see what we might learn. It’ll be fun.

To kick things off, I identified a starting pitcher with a ground ball rate similar to Kirby’s. Finding the ideal match was easier than expected. One of the freshman hurler’s teammates fits well with one exception – success on grounders.

Seattle’s ace, Luis Castillo, has an almost identical ground ball rate to Kirby’s. Plus, he’s allowed just a few more batted ball events (BBE) and ground balls (GB) than his new teammate. However, a significantly higher number of Castillo’s grounders have been converted into outs than Kirby’s. It’s worth noting Kirby’s 59.5% GB out rate is the lowest among 138 MLB pitchers allowing 100-plus ground balls allowed this season.

At this point, some of you may be thinking Mariner defenders are letting Kirby down on ground balls. But on the surface, that sounds preposterous. Doesn’t it? Let’s see where the number take us. 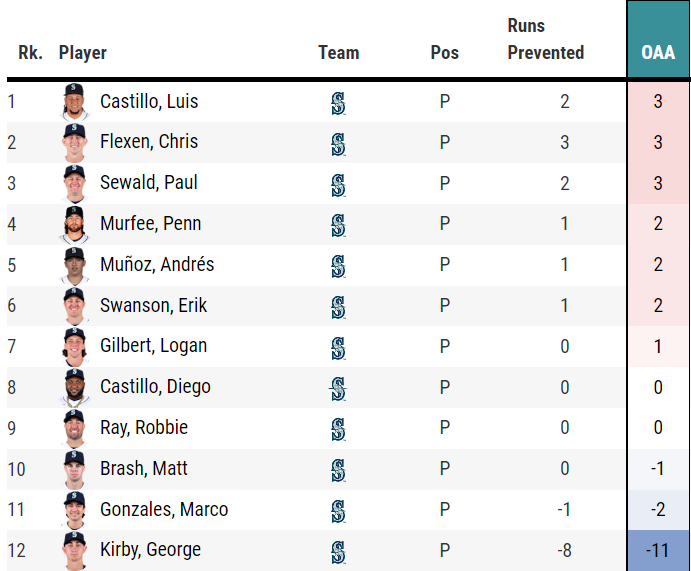 The -11 OAA of infielders behind Kirby is not only worst on the Mariners. It ranks 168th among 169 pitchers surrendering at least 100 batted balls to their infielders this season. Washington’s defense behind Patrick Corbin (-13 OAA) is last. Despite these numbers, it’s difficult to reconcile the notion of Seattle defenders forgetting how to handle balls put in play only when Kirby is pitching.

Let’s go to the videotape

To address my reservations, I applied the eyeball test by reviewing videos of all 56 ground ball hits off Kirby this season. This process revealed a significant number of these grounders weren’t ideally struck. Exactly half (28) fell into the Statcast contact category of “poorly hit/topped.” Kirby has a .252 AVG on these grounders with a .171 xBA. That’s a significant gap.

Expected Batting Average (xBA) uses launch angle and exit velocity to determine the likelihood of batted balls becoming a hit. It’s important to note xBA removes the influence of defense from the equation.

Here’s an example of a productive poor/topped ball against Kirby by Oakland’s Jed Lowrie on May 24. The ball eluded first baseman Ty France, which permitted Tony Kemp to score from first base on what was officially scored a double. Yet another example of why relying on error tallies and fielding percentages to evaluate defense is unwise.

Lowrie’s double had an 83.9 mph exit velocity with a .131 xBA, which suggests the probability of becoming a hit was low. Not impossible, but less likely. Based on the video evidence, the Statcast assessment is accurate. This disparity spurred me to compare Kirby’s AVG, xBA, and their delta to his fellow Seattle starters. Again, we see a noticeable difference between the 6-foot-4 righty and the rest of the Mariners rotation.

Kirby’s well below-average success on ground balls explains his unusually high .327 BABIP, which is eighth highest among pitchers with 100-plus innings. The MLB average BABIP is .290 this season. The Rye High School product’s BABIP has caught the eyes of some fans, especially with him having a .353 BABIP since returning from Class-AAA Tacoma in July.

Batted Average on Balls In Play (BABIP) represents batting average on balls put into play with the exception of home runs.

Full disclosure; I’m not a fan of BABIP. It doesn’t take into account quality of contact and excludes an important component of baseball in this era – the home run. Having said all that, I must mention BABIP is my wife’s favorite stat. Why? She likes the way “BABIP” sounds.

In a way, the lack of ground ball success Kirby is experiencing this season doesn’t make sense. Perhaps it’s a byproduct of bad luck, defensive shifts backfiring, the randomness of baseball, or something else beyond the imagination of this dumb blogger. Then again, you can’t argue with results.

Kirby has been one of baseball’s best starting pitchers since rejoining the Mariners in late July and he has the numbers to prove it. Just last week, the Rye, New York native’s outstanding performance in August earned him AL Rookie of the Month honors.

Keeping the ball on the ground hasn’t hurt the overall success of Kirby or the Mariners – even if an excessive number of those grounders have resulted in runners reaching base. In the end, we may be looking at a “if it ain’t broke, don’t fix it” situation.

Realistically, Kirby’s quirky ground ball numbers are interesting to nerds like me. That said, he’s been highly effective at avoiding damaging contact, limiting walks, and missing bats since returning from Tacoma. These factors truly matter and are the reason he’ll probably start postseason games for the Mariners next month.