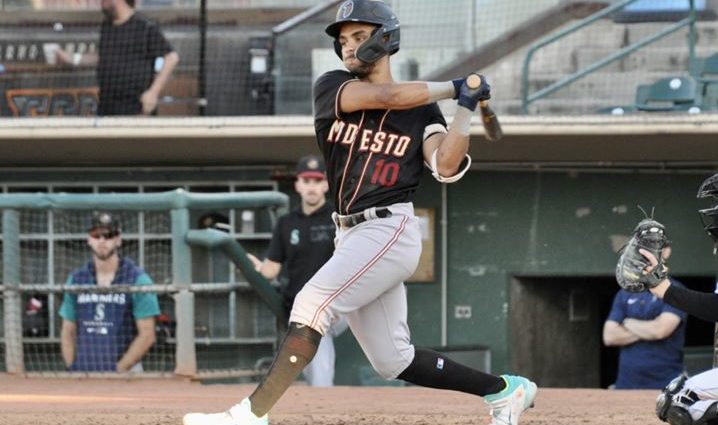 It’s that time of year again, but here’s a reminder this is not a Player of the Year situation, it’s very specifically Prospect of the year, meaning a prospect’s potential impact and development drive his candidacy, not pure performance.

Before we get to this year’s winners, let’s take a look a previous winners:

Miller was the club’s 4th-round pick in 2021, entering pro ball an athletic right-hander with some arm speed and deception. In less than a year and a half, he’s reached Double-A Arkansas by adding velocity beyond the mid-90s and missing bats with three pitches.

Miller’s delivery is more aggressive than it was at Texas A&M, accounting for the increase in power, and his control has taken a half step back, but remains playable.

There are remaining questions with Miller’s ultimate role, however. While the effort in the delivery isn’t a significant concern in and of itself, the effects may be, including the aforemention fringey control, and general pitch consistency deep into games.

If he remains in the rotation, the 6-foot-2, 190-pound Texas native offers a a 65-grade fastball up to 97 mph, a 50-grade slider that projects to miss a few bats but lacks dominant traits, and a promising changeup with good arms and some sink and fade.

Like just about any power arm, Miller’s secondaries could tick up in a relief role, and if he’s to help the 2023 club its likely out of the bullpen. Despite being 24, however, Miller’s developmental dial is barely beyond the halfway point — there’s still room for the kind of growth that results in Miller landing in the majors as a mid-rotation starter.

In particular, Miller’s slider could use more tilt, and he simply needs to develop a better feel for his changeup so he can use it more often. The pitch, thrown in the mid-80s, is Miller’s best groundball offering.

Miller dominated the High-A Northwest League in 16 games, posting a 31% K rate and a walk rate below eight percent. He hasn’t quite replicated those numbers in the Texas League, but he’s competed very well, and has held his 94-96 mph velocity well into the 90-100 pitch range.

Miller likely starts 2023 right back in Arkansas, but witha chance to break into the majors by season’s end. He’ll be coming off a 135-inning season, so should be physically prepared to take on a 150-plus inning workload, suggesting if he shows he can throw a few more strikes, it’d be a surprise if he doesn’t get at least a cup of coffee in Seattle.

He’s 93-97 with a slider and change, all of which return good metrics. So what’s the problem? Strike throwing.

Berroa tossed under 61% strikes, walked 57 batters in 85.2 innings with the High-A AquaSox and Double-A Travelers, and hit four batters. He also has had some issues holding runners, but that’snot really any kind of red flag at this stage. The general control problems are.

He’s not a ground ball arm — it’s mostly fly-ball stuff, but it’s not severe, and he has done a good job keeping the ball in the yard at first glance, but a second look suggests perhaps that merely on the strength of missing bats.

Berroa is a few years away from the kind of delivery and consistent command of a big-league starter, but the stuff suggests a big-league reliever, at worst. He still needs time to find a more repeatable release point — 60.6% strikes is pretty low even for a bullpen arm — but he’s just 22, so there’s plenty of time to fix it.

He’s a very good athlete with plus tools across the board, and his progress behind the plate isn’t necessarily apparent during a quick look, but everything required of a long-term backstop is in his skill set.

I’ve seen him show high-level footwork and throwing technique gunning down baserunners, though as expected there are some inconsistencies there. He’s a 60 runner now, with above-average quickness, but I don’t project a lot of quick-twitch to make a transition to second base an easy one, should the club move him out from behind the dosh to accomodate a quicker path to the majors.

Ford’s hard-hit rate of 27% this season is below the upper-echelon among prospects at his level, but he rarely makes weak contact — 12.5% — and uses the entire field with at least doubles power from line to line.

My best projection on Ford defensively is he’ll develop into at least an average catcher, but if his bat stays far ahead of his glove and profiles well at other positions I expect the club will ship him out onto the grass, rather than the dirt, to make for a smoother and higher probabiluty transition.

Second base has been mentioned a lot, but unless that move is made relatively soon I fear it’s just another spot on the diamond that could slow his bat’s arrival. Having said that, to date his bat hasn’t quite suggested elite status, so we may be another year or more away from such a decision.

Ford is a very good prospect, but has yet to display elite production. It may just be a matter of time, however, since he grades out very well in strike zone judgment and scouts love the swing path.

The easy comp here is J.T. Realmuto — right-handed hitting catcher with very good athleticism — but I see some young Russell Martin here, too.

Clase makes a lot stronger case to beat out Ford than Berroa to pressure Miller. While many see the 133 strikeouts on top of a speed and defense profile, I see at least projectable big-league gap power, maybe more, and a players whose switch hitting needs a lot of work and draggged down his slash line and increased his K rates to alarming levels.

He swiped 55 bags in 65 attempts (85%) and made some strides in center field, showing better jumps and routes, though he still has  aways to go here.

Clase will have to improve his zone discipline; he chases away, down, as well as above his hands, and must make more contact to have any shot to stick in the majors, let alone play with any regularity.

There’s some choppy nature to his swing — it’s longer and loopier from the right side, but the lefty mechanics need some refining, too, though it’s really mostly about him recognizes strikes sooner and more often.

His speed alone suggests an average center fielder, but there could be more in the tank defensively. He’s not a slap hitter, either. though part of his adjustments to make more contact may include a more controlled attack, so we’ll see where the power lands in a year or two.

He won’t be 21 until late next May and locals will get a chance to see Clase in Everett. He’s a fun player with 70-grade speed and a lot of whippy, twitchy tools, somewhat resminscent of Kenny Lofton, though that’s not a player I’d use as a comp at this stage.

2022-09-19
Previous Post: CHURCHILL: Quick thoughts on the Mariners’ AFL roster
Next Post: Would the Mariners be better off playing the Wild Card series on the road?