Mariners Prospects of the Month: Raleigh, Williamson atop month’s best 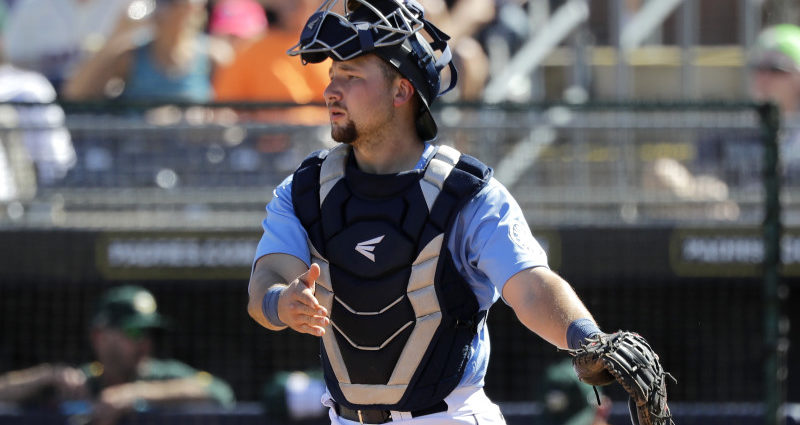 ﻿It was a stellar opening month for the Seattle Mariners farm system. Four of the club’s top five prospects have made quite the statement. Two are now in the big leagues, two others have had big-time starts to the 2021 season, perhaps more than anyone could have expected.

At the end of each month, we’ll scout out a pitcher prospect and hitter prospect as prospects of the month. Let’s start in the batter’s box, where a handful of bats scorched the baseball. But three stood out the most, and none will come as a surprise.

HITTER PROSPECT OF THE MONTH

He also has gunned down six of 17 would-be base stealers.

But it doesn’t end there.

His 13.5% strikeout rate is down from 25% his first two pro seasons, and he’s yet to strike out as a right-handed batter.

This wasn’t an easy choice, but Raleigh sure made it fun.

Noelvi Marte, SS — Modesto (A) | 19
Marte will not be 20 until after the season but doesn’t seem fazed one iota by the pitching in the Low-A West league.

He’s among the elite players and performers in the circuit and has a chance to earn his way to High-A Everett, though expecting that to occur early is more reactionary on a kid with 22 games experience in affiliated stateside ball.

Julio Rodriguez, RF — Everett (A+) | 20
Rodriguez, the club’s No. 2 prospect and among the top 5 prospects in baseball, started the season with a bang, similar to that of Marte.

On the mound, where the club is building legitimate depth in the lower minors including several with potentially fast tracks to the majors, wasn’t quite as close a race, thanks to the club’s top left-hander. But there were numerous contenders.

PITCHER PROSPECT OF THE MONTH

Brandon Williamson, LHP — Everett (A+) | 23
Williamson struck out 26 of the first 52 batters he faced over three short-scripted outings to start the season. Then he whiffed 13 of 25 batters in the best start of the season down on the farm, allowing two hits, a run and a walk on 9o pitches, 75 strikes.

In the third inning of this start, Williamson completed an immaculate inning — nine pitches, nine strikes, three strikeouts — which wasn’t all that much more dominating than most of his other 7-plus innings.

Williamson wins a lot with his fastball right now, thanks to good velocity into the mid-90s and up to 97, and some deception in his delivery. His curveball, his best secondary pitch, is one he can throw for strikes or bury it for whiffs, and he did both in May.

In 20 innings over four starts, Williamson struck out 50.6% of the batters he faced (39 of 77), and allowed just 18 baserunners — nine hits, seven walks, two hit batters. He had just on hiccup, so to speak, a four-inning outing that yielded four walks, but just one hit and eight strikeouts of 16 batters faced.

Opponents, when leading off an inning, managed to reach base only twice all month off the TCU product.

Adam Macko, LHP — Modesto (A) | 20
Macko has been very good in four starts, and consistent, too, fanning 10 in each of his last three outings. He’s also yet to serve up a long ball, despite giving up nine earned runs.

He’s struck out 44% of the batters he’s faced, and while he’s had a short out of control problems in each appearance, he’s rarely been squared up and often induced weak contact.

Macko is up to 95 mph, but pitches in the low-90s with average-but-improving fastball command, and the four-seamer has some run to his arm side.

He’s done a good job getting inside on right-handed batters with the heater, setting up favorable curveball might be the best in the system, missing bats in Low-A West and also serving as an early-count weapon of the backdoor variety.

He has a slider he uses versus left-handers, but can bite the back foot of righties with it, too, and the occasional changeup is projectable. Macko is adept at locating his secondaries as well as any arm in Low-A.

Macko is adept at locating his secondaries as well as any arm in Low-A.

Taylor Dollard, RHP — Modesto (A) | 22
Dollard has missed bats (21.6% swinging strikes) in four starts and 19.1 innings, allowing 19 hits and four bases on balls. He’s struck out 48% of the total batters he’s faced and walked under 5%. He’s probably ready for High-A — he probably should have started there, but there’s no room for starter innings in Everett.

He’s probably a long-term reliever but offers average stuff with a chance at an above-average breaking ball, an average changeup, and some life on a 91-93 mph fastball, suggesting back-end rotation upside.

Dollar doesn’t carry as much ceiling as most of the other top arms in the system, but he does have a relatively high floor, and has touched 95 mph in side sessions and shorter outings.

2021-06-01
Previous Post: Could Erik Swanson Have A Breakout Season For The Mariners?
Next Post: May Prospect Report: Raleigh, Rodriguez, Marte, Williamson shine brightest