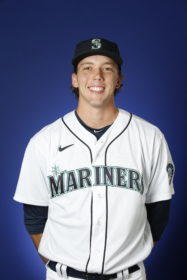 4. Logan Gilbert, RHP
Simply put, Gilbert looks the part of a frontline arm capable of logging 120 pitches per start and covering 200-plus innings per season.

He uses his 6-foot-6 frame to drive the ball downhill and pitch with life up in the zone, displaying a vertical attack unmatched in the system.

The fastball is up to 96 mph, cruising 92-95 with armside run. His best secondary is a low-80s slider that flashes plus and works well off the four-seamer and in tandem with his average to above-average knuckle curveball which comes in at 74-77.

Gilbert’s changeup is fringe-average at present, flashes above average and could end up a plus offering in time. His consistent arm speed and use of his lower half to finish strong out front helps everything play up, but the changeup may benefit most.

His delivery is consistent, making him a safe bet to throw strikes consistently, and having come to pro ball nearly three years ago with average command there’s a good chance he ends up in the plus range.

Gilbert won’t overpower hitters with velocity, but he should get good fastball value from its movement and his ability to fill up all quadrants of the zone. His ability to use his entire arsenal projects for some success immediately upon his arrival in the major leagues.

He’s yet to show his best stuff for an extended period, since Gilbert has managed just 135 professional innings — thanks to an illness the summer he was drafted and the cancellation of the MiLB season a year ago — and they all came during the 2019 campaign across three levels.

He’s 24 in May and around 225 pounds, so there’s no meaningful physical growth remaining, but the package of stuff, projectable durability, and command suggest a good No. 3 starter, with a chance for a little more depending on the further development of his changeup.

The former first-round pick is ready to face big-league bats, and should get that chance early in 2021, whether it be in May or right from the get-go as a member of the club’s six-man rotation.

Pitch development and command can be improved, and both can be developed beyond present projections. If either happens for Gilbert his comps could change along with them, though Carpenter peaked as a 6-win starter and posted two other 5-win seasons and a 4.5-win campaign, so that’s a pretty darned good ceiling comp for the Mariners here.

I do wonder, however, if there might be another tick of velocity coming, perhaps enough to get him more consistently into the mid-90s, which also can be a profile-altering development.