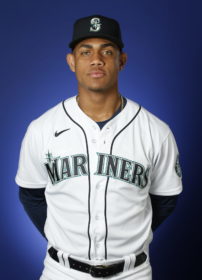 2. Julio Rodriguez, OF
Rodriguez has done nothing but hit since a Tim Kissner-led Mariners Lat Am scouting department signed him nearly five years ago out of the Dominican Republic.

The only problem is he’s amassed just 547 at-bats between the DSL, Sally League and his 17-game stint in Advanced-A Modesto to end 2019.

The tools are loud, starting with 70 raw power and evidence he’ll make consistent enough contact to tale advantage. He’s a bit pull happy entering 2021, but has hit searing line drives to the middle of the field in BP and occasionally in games.

His hand-eye is high-end and there’s bat speed to spare. In favorable counts versus lower-level arms he’s destroyed velocity and shown an improved ability to stay back on soft stuff. But there’s still work to do in this department, and better pitching may give him fits early.

Despite the propensity to get himself out, he was a teenager playing at both full-season Class-A leagues the last time there were minor league games, and he still found a way to rake, including more than one dominating tear.

The right-handed hitter does have a ways to go to be considered a surefire impact bat in the big leagues, which is why it’s more difficult to project him as such as easy as it is for the club’s No. 1 prospect. Rodriguez’s tendency to leak out as he stalks pitches results in some front-foot swings, opening him up for offspeed stuff and a relentless attack of the outer edge. His swing has at least one or two unnecessary parts to it, but he’s already made similar fixes the past few years, so I’m not overly concerned by its existence after 143 professional games.

Athletically, the now-20-year-old has lost a step or so as he’s filled out — he was 180 pounds when he signed and was up over 220 last spring — reducing his foot speed to about average, which pushes him to right field regularly where he’s shown instincts and a 70-grade arm with accuracy. He’ll likely end up a fringe-average runner, but he does a lot of things well defensively that should help him stick for years.

His makeup is off the charts and the kid oozes personality, including a persistent smile, giving him a great chance to be the darling, fan-favorite of the club’s top young players. If you’d never seen Rodriguez before in your life — live, video or a simple photo, you could pick him out in a ballpark full of baseball players, because he’d be the one having the most fun and making sure everyone within miles know about it.

If he can improve his ability to cover the whole strike zone and use more of the field, the ceiling here is very high, up to and including a non-zero chance at MVP-caliber seasons in his prime, led by tons of extra-base power.

He’s still a few years away, most likely, but Rodriguez has the physical tools and fortitude to compete and develop in a league where he’s among the youngest players, which will be the case from the get-go this spring.

Rodriguez is likely slated for Double-A Arkansas where he’ll see pitchers 2-6 years his senior, offering the kind of examination he needs to take the next steps. I’m not sure how likely it is he sees Tacoma before year’s end, but Rodriguez isn’t your typical 20-year-old.

Rice won an MVP in 1978 and finished Top 5 on five other occasions, posting five 5-win seasons, two of them 6-win efforts and a 7.7 fWAR campaign when he won the American League MVP. Rice also had a cannon in right field and used instincts and routes to provide value in the field.

Rodriguez has tools and a skills trend that suggest something similar is at least plausible. His profile-changer is the hit tool. I project average to above-average ability to hit for average and get on base — .265-.270, .330-.340 OBP — to support the power, but there’s a path for .280-.290 and .370-plus on-base marks, which could get him into some MVP conversations down the line.

2021-02-26
Previous Post: How Can Anyone Know Whether Jarred Kelenic Is MLB Ready?
Next Post: Mariners Prospect Rankings: No. 1– Jarred Kelenic, LF