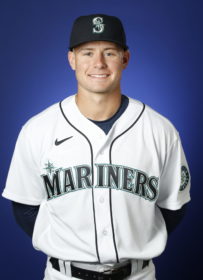 1. Jarred Kelenic, OF
Kelenic brings strength, speed,  instincts, power and hitting to the field daily, and has performed well since Day 1 after the New York Mets tabbed him at No. 6 overall in 2018.

The left-handed batter has flashed plus hitting skills, including good plate coverage and an advanced ability to dissect situational counts. The swing is short, the bat speed is plus and it results in a powerful, compact swing he trusts versus good velocity. Combined with his ability to make consistent hard contact and find the barrel, Kelenic may be able to get to and beyond 30 home runs.

He’s always done a good job avoiding the chase, but in Modesto in 2019 showed a tendency to lean out and over the plate for something to drive, which in turn made it more difficult to get to hard stuff up and/or in — pitches that ended up on his hands, yet in the zone. Kelenic’s instincts in the batter’s box are very good, and he’s already adept at using the middle of the field.

He’s yet to see a steady diet of big velo and ungodly breaking balls — the best pitching he’s seen came against his own teammates last summer — but he’s been astute at avoiding getting longer with his swing, allowing him to battle effectively.

He’s a plus runner with enough range to handle center, at least for the first several years of his career, but the Mariners pushed him primarily to left field at the Alternate Training Site where he was asked to clean up some basics.

Despite the present speed, Kelenic has added size and strength and likely will continue down that path, so he may end up above-average, instead, suggesting he’s not likely to swipe a lot of bags, though he reads pitchers well and offers well above-average value on the bases.

Kelenic’s offensive future is bright, but whether he’s a star or merely a solid player may depend on if he can remain disciplined with his game plan and let the power happen as a result of a premium swing. A power-driven approach means decreased contacts rates, therefore a strain on his batting average and on-base percentage.

If he can stay within his strengths, we may be staring down a .320 hitter capable of 40 doubles and 30 homers.

Despite recent even in the Mariners organization regarding service time manipulation, Kelenic is likely to start 2021 in Tripe-A Tacoma where he would receive valuable time versus a varied lot of experienced pitching. It’s easy to forget he’s played just 17 games above the California League and won’t be 22 years of age until July.

If he indeed misses out on an Opening-Day assignment with the parent club, his time in Tacoma could be anywhere from 2-8 weeks, which heavier emphasis on the short side.

Kelenic currently represents the Mariners’ best chance at a superstar.

Sure, Holliday is a right-handed batter and was bigger than Kelenic, but he was an underrated athlete who played a strong left field in his prime, and the dude raked. Granted, he represents the ceiling projection for Kelenic, but he did post three 6-win season, one of them a 7-win effort, plus three other 4-win years and two seasons of 3-plus wins.

I’ve seen some Grady Sizemore comps for Kelenic, and those fit in a lot of ways, too, but such a comp doesn’t represent Kelenic’s hit tool nearly well enough, which is the same reason I don’t like the Bryce Harper comp some have broached, nor Lance Berkman comp due to defense and baserunning.

Kelenic is better defensively than Holliday, and may get a chance to play some center field, where he projects at least as good as Mike Trout, potentially increasing his chances to compete for an MVP in his prime.