Can Kris Bryant Be A Good Match For The Mariners?

Seattle Mariners President of Baseball Operations Jerry Dipoto has repeatedly stated that his team needs to add a middle-of-the order bat this offseason. Could free agent Kris Bryant be the hitter needed to bolster the Mariners’ lineup?

Still, I suspect a segment of Mariners fans are dubious to signing Bryant to a long-term deal. An understandable sentiment likely fueled by two principal concerns. Challenges at remaining available in recent years and a noticeable decline in production after initially approaching superstar status.

So, does a match between Bryant and the Mariners make sense?

Before rendering an opinion, let’s dig into Bryant’s versatility, availability, and productivity. Afterwards, a fun comp that may provide a smidge of perspective on the potential value Bryant could bring to the Mariners. Or, maybe it won’t. You can decide.

In 2021, Bryant demonstrated a unique blend of positional versatility and offensive productivity. He became one of only three players to appear in 10-plus games at first base, third base, and each outfield position in a season and post an OPS+ of 100 or greater. Cory Snyder did it with the Giants in 1992. So did Andy Van Slyke as a Cardinal in 1984.

On-base Plus Slugging Plus (OPS+) is a normalized version of OPS that adjusts for park and league conditions. OPS+ is scaled so 100 is always league-average. As a result, an OPS+ of 150 means a hitter was 50-percent more productive than the average player. An 80 OPS+ would be 20-percent below average.

At first blush, Bryant’s ability to play multiple positions and deliver with his bat are big selling points in his favor. But there’s an important factor to keep in mind. He moved around the diamond much more in 2021 than any other season of his career. 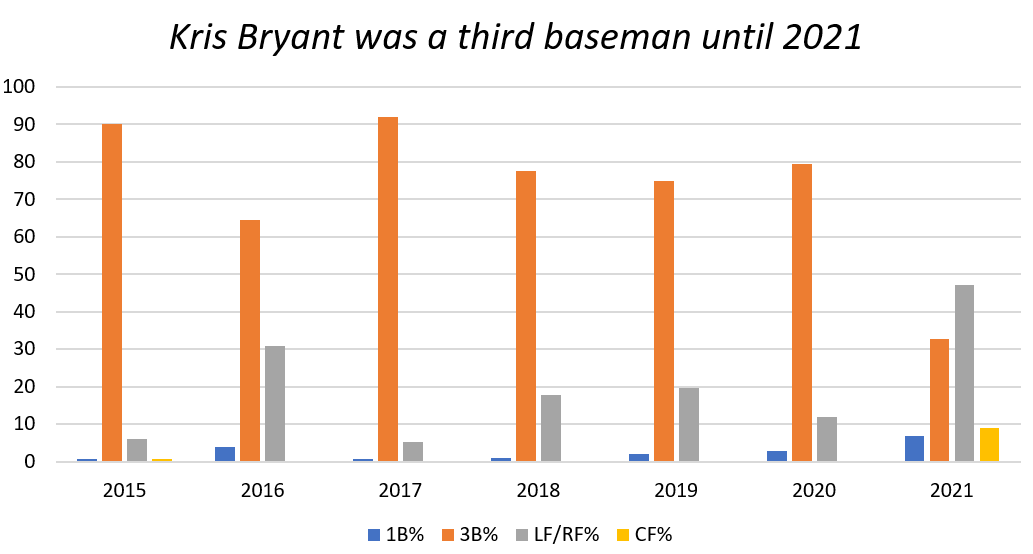 Bryant was always viewed as a versatile fielder since debuting with the Cubs in 2015. However, as the preceding graphic illustrates, he played more third base than the combined total of other positions each season until this year. Call me a skeptic, if you please. But it appears Chicago attempted to elevate his trade value by moving him around the diamond more often than ever.

After acquiring Bryant in late July, the Giants utilized him as a corner outfielder at approximately the same frequency as the Cubs. However, the veteran played third base on a more regular basis in San Francisco than in the Windy City.

Regardless of Chicago’s motivation to move Bryant around more in 2021, one thing is certain. A third baseman capable of playing average-or-better defense in a corner outfield spot could be a big plus to a postseason contender. That said, expecting the Las Vegas, Nevada native to spend significant time in center field in the future seems like a reach. At least it does to me.

Before 2021, Bryant started just one game in center field. All told, he’s played five complete games at the position in his career. Four this year with the Cubs, the other during his rookie season. Moreover, he hasn’t demonstrated the quickness normally associated with regular center fielders.

This year, Bryant had a 27.9 ft/sec sprint speed, which was eighth best among third baseman with 100+ competitive runs. That same sprint speed would’ve been top-10 for left or right fielders. However, it would’ve ranked 20th among center fielders.

Can Bryant be a center field solution? Sure, but it would be unreasonable to expect more than an occasional appearance going forward. Especially as the 2015 NL Rookie of the Year enters his third decade.

When discussing potential free agent infielder targets for the Mariners last month, I noted Bryant had played in 78% of his teams’ games since the beginning of the 2018 campaign. Not a terrible number. But worthy of mention when assessing a 29-year-old position player likely to receive a commitment of five-plus years from his next team.

Since player availability is a cornerstone component of their value to a team, I decided to review Bryant’s health history. With the help of his Baseball Prospectus page, I cobbled together a list of instances the San Diego alum missed three-or-more games due to injury. The list is relatively short, although it is compressed.

As you can see, 2018 was the year health challenges influenced Bryant’s readiness most. The root cause, a shoulder unable to properly heal during the regular season.

Despite the balky shoulder, Bryant managed to slash .259/.354/.412 in the 26 games following a second IL stint. The damaged wing did appear to affect one crucial component of his offensive arsenal – home run power. He hit just 13 dingers in 2018.

Bryant rebounded nicely in 2019 with strong offensive production, which resulted in his third All-Star team selection. However, the right-handed hitter once again encountered difficulties during the COVID-shortened 2020 season. He spent time on the IL with a sprained finger, but also struggled with back, elbow, and oblique issues. In the end, Bryant delivered his worst slash line (.206/.293/.351) of his career.

Once again, Bryant bounced back in 2021 delivering the production and versatility we’ve already discussed. But some of you may have a hard time overlooking his recent health-related issues. After all, the second overall pick of the 2013 MLB June Amateur Draft hasn’t played in 150 games since 2017. Even worse, injuries have affected his offensive prowess in two of the last four seasons.

Reasonable concerns considering Bryant enters his age-30 season next year. Still, it’s worth noting a pair of recognizable 2021-22 free agent infielders actually played in fewer games than Bryant did since 2018 and appear to have maintained a high market value.

Corey Seager playing in just 56% of scheduled games since 2018 didn’t discourage the Rangers from signing the 27-year-old to a 10-year/$325 million contract last month. Whether Carlos Correa matches or exceeds Seager’s deal is unknown at this time. But Correa appears destined to make a big splash in free agency once the MLB lockout ends. Therefore, it’s reasonable to expect Bryant and his agent, Scott Boras, will also be seeking a lucrative long-term contract this winter.

Health not only affects availability; it also impacts a player’s ability to deliver positive results. In Bryant’s case, it’s not difficult to determine when injuries affected his performance most.

Bryant’s career is easily divided into two phases. His first three seasons (2015-17) when he appeared in 94% of Chicago’s games and was arguably a top-10 player in MLB. The subsequent phase when he appeared in 78% of scheduled contests wasn’t as kind to him health-wise, which is clearly reflected in the numbers.

At this point, Bryant’s diminished production has probably soured some of you on his with the Mariners. Fair enough. But consider this; his 2018-21 numbers were still very good. When I searched for hitters with a similar bWAR and OPS+ to Bryant’s since the beginning of the 2018 season, several familiar names popped up.

To be clear, comparing Bryant to the above players doesn’t erase the reality of his struggles to remain available in recent years. But it’s worth mentioning that since 2018 he’s delivered approximately the same value and offensive production as the 2020 AL MVP (José Abreu) and the 2021 AL batting champion (Yuli Gurriel).

When considering Bryant’s injury issues since 2018, a current Mariner’s name kept popping into my head – Mitch Haniger. Think about it. Haniger has persevered through a gauntlet of injuries since debuting with Seattle in 2016. Despite the Cal Poly product’s health challenges, a vocal segment of Mariners fans is demanding the team sign him to a contract extension.

So, how did Haniger and Bryant match up statistically this year? There were similarities, although there were also differences worthy of mention.

Haniger is a year older and played in seven more games than Bryant. But they had a similar strikeout rate, SLG, OPS+, and bWAR. That said, Haniger clobbered significantly more home runs. Meanwhile, Bryant held a distinct edge at reaching base that is readily on display with a superior walk rate, OBP, and wOBA.

Okay, I’m not trying to sell Bryant because his stats sort of look like a popular Mariner’s. But when you reflect on his injury challenges and slipping performance over the last four season, I suggest you at least consider the reality that Kris Bryant was essentially as valuable as Mitch Haniger in 2021.

Adding Bryant would undoubtedly help strengthen the Mariners’ lineup. But there’s a distinct possibility that he never produces at an MVP-level again, as he did earlier in his career. Instead, Seattle may be getting an above-average hitter capable of moving around the diamond, who may not be available to play as often as other high-priced stars.

Does that description sound like a good match for the Mariners? On a short deal, sure. But a long-term contract likely leaves Seattle fans feeling disappointed with the value Bryant ultimately delivers to their favorite team.