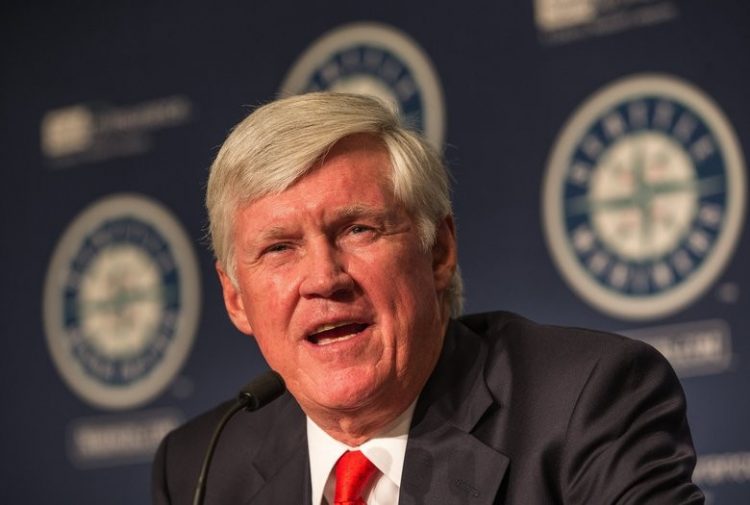 Whenever queried about his team’s payroll, Seattle Mariners CEO John Stanton conveys a similar message. His team committed a historical amount of money to salaries last season and there’s room for growth.

Another recurring theme; general manager Jerry Dipoto has the necessary financial resources to improve the roster.

Stanton is right about his payroll. According to Baseball Prospectus, Seattle started the 2017 season with a team-record $154.3 million in player salaries. Whether the club is spending enough to field a contender is debatable.

Let’s assume the Mariners grow their payroll by the average of their 2016 and 2017 increases (12-percent). That puts the team in the neighborhood of $174 million next season; an impressive figure until you review current commitments.

In essence, the Mariners could fork over $133 million to 12 players next year. That’s approximately 71-percent of that projected $174 million with glaring holes in center field, at first base, and within the pitching staff.

Still, realizing small-scale savings and relying on their current cadre of young players won’t get the Mariners to the postseason — not in 2018 at least.

To field a serious contender, Dipoto has to build a roster capable of winning 90-plus games, not 85-ish. That’ll require adding established performers, which means spending money.

Some may suggest trades to improve the team. After all, Dipoto shrewdly added Leake, Segura, Haniger, Gamel, Miranda, Gonzales, and Pazos by wheeling and dealing.

Remember, the Mariners couldn’t have matched the prospect package the Houston Astros sent to Detroit in August for Justin Verlander without completely selling the farm. Finding a pearl in the trade market isn’t going to get easier this offseason.

Even if Dipoto pulls off innovative deals for proven players, the payroll would likely increase significantly. There’s no getting around it. The Mariners need to spend at a higher level to compete in the AL West next year.

Am I suggesting going on an wild spending spree? Absolutely not. Obligating lots of money doesn’t necessarily guarantee success in the win-loss column or postseason.

Last year, the Cleveland Indians ranked number-22 in salaries, yet reached the World Series. In 2015, both Fall Classic contestants — the Kansas City Royals and New York Mets — had mid-range payrolls.

Conversely, the Detroit Tigers and San Francisco Giants had payrolls north of $180 million and both endured losing 2017 campaigns.

Having said that, modifying the Mariners’ current free agent philosophy would improve the chances of ending their 16-year postseason drought. What exactly is that philosophy you ask?

When recently asked about pursuing big-ticket free agents by Larry Stone of the Seattle Times, Stanton demurred, “I’d rather have a Mitch Haniger than another payroll bust like Richie Sexson.”

At first, Stanton’s comment makes sense. By the time a player reaches free agency, they’re usually approaching their post-peak years. Quite often, buyers pay for the back of a free agent’s baseball card rather than future value.

In the case of Sexson, most fans agree with the Mariners CEO; his signing was a bust. But, as the venerable Mr. Stone points out, Seattle did get two good years out of the first baseman, who inked a four-year/$50 million deal with the club in late-2004.

It appears the perception of the Sexson deal sours more as the years of baseball futility continue to pile up in the Emerald City. But, his production as a Mariner was similar to another Seattle first baseman, who’s viewed as a superior hitter — Tino Martinez.

Both players’ stat lines are very alike, although I’m not suggesting Sexson was Martinez’s equal. Tino was at an earlier stage of his career and more affordable than the $50 million man.

That said, no Mariner first baseman has provided more value or production since Sexson’s release in 2008. That’s over a decade folks.

Stanton’s comment about Sexson, and other statements made to Stone, suggest a preference to acquire low-cost, controllable everyday players.

That’s a great approach, assuming the Mariners had enough disposable trade assets to land similar players or prospects readily available to perform at that level. They don’t on either count.

In reality, Seattle is in a unique and trying position. They’re attempting to win now, while resetting the farm system.

The organization’s strategy to achieve their goals? Supplement a core of 30-somethings with younger, inexpensive players and wait for help from the minor leagues.

Unfortunately, the youngsters remain unproven, some veterans are regressing, and help from the farm won’t arrive until 2019 at the earliest.

While the Mariners wait for prospects Kyle Lewis, Nick Neidert, Evan White, Sam Carlson, and others to develop, Father Time is chasing down Hernandez, Cano, Seager, and Cruz. Spending more money now would give this aging group a chance to win before it’s too late.

Again, I’m not proposing wreckless spending. However, premium free agents would help bridge the gap and make the Mariners more relevant until the kids arrive.

How good would a Yu Darvish or Jake Arrieta look at the top of a rotation that had no pitcher start 30 games last year?

Do I think the Mariners will make such aggressive moves? Probably not. That’s okay by me. I’m not an advocate of paying for a player’s previous achievements.

Then again, I’m not the person saying I expect the club to win and make the playoffs in 2018.

Perhaps, the Mariners opt to continue improving their roster around the edges, hope for healthy and productive seasons from veterans, and depend on the youngsters flourishing. Essentially, stick with last year’s plan.