Arkins: Potential 1B Options For Mariners 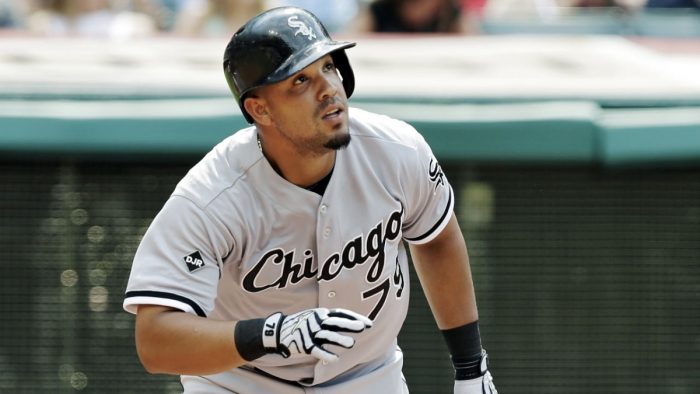 The Seattle Mariners need help at first base. That’s not a surprise. Incumbents Yonder Alonso and Danny Valencia are free agents and prospect Daniel Vogelbach remains an enigma. How the club tackles the situation isn’t clear at the moment.

Since joining the Mariners in September 2015, general manager Jerry Dipoto has favored trades over free agency to address major weaknesses. However, the pitching staff and outfield are also top priorities. Seattle may rely more heavily on free agency than in the past.

Keeping that in mind, I compiled a list of potential first base candidates that’s a mishmash of internal options, free agents, and trade targets. Dipoto has a knack for finding under-the-radar types, Mitch Haniger and Ben Gamel are examples. I’ve included a few of those too.

In this section is a player on the Mariners 40-man roster and two free agents the club has exclusive negotiating rights with until November 7.

The left-handed hitter entered Spring Training with an opportunity to platoon with Valencia, but defensive shortcomings landed him in Tacoma.

Casting further doubt over Vogelbach’s readiness was management’s decision to forego giving the 24-year-old a chance to help the Mariners in August. Instead, Dipoto chose to trade prospect Boog Powell for rental player Alonso.

Vogelbach has hit at every level, but his glove work suggests a better fit at designated hitter. For this reason, it’s unlikely Seattle entrusts first base to him next season.

Acquired to bolster offensive production at first base, the 30-year-old lived up to expectations with a .265/.353/.439 slash in 150 plate appearances. That said, manager Scott Servais shielded Alonso from lefty pitching — his kryptonite. The veteran had just eight plate appearances against southpaws as a Mariner.

Alonso had a career-high 28 home runs in 2017. Whether his power continues or regresses to the norm is unclear. Entering last season, he had just 25 bombs in 1,597 previous plate appearances dating back to 2013.

Assuming both sides could agree on terms, retaining Alonso gives Seattle a known quantity with a .340 career OBP. Adding a right-handed complement would make sense. Perhaps, a utility player capable of covering first base and providing league-average offense.

Valencia’s overall offensive production (.256/.314/.411) was close to his career averages. However, the 33-year-old is best suited for a platoon role facing southpaws. I suspect he doesn’t return to Seattle next year.

While I expect Dipoto to be more aggressive than in years past, I don’t believe he’ll pursue a high-end free agent first baseman, such as Eric Hosmer.

Yes, Hosmer would look great a Mariner uniform and is the best free agent first baseman. But, Scott Boras represents the 28-year-old. The super-agent will be seeking a long-term deal that establishes the market at the position. Seattle has too many needs to overspend at first base.

Still, there are free agent options, who won’t require the commitment in dollars or years Hosmer will likely receive.

While Santana won’t command as much as Hosmer, he won’t be cheap either. The switch-hitter has averaged 24 home runs annually during seven full seasons and his 14.6-percent walk rate since 2015 is sixth best in the majors. The 31-year-old has also proven durable with 600-plus plate appearances in every season since 2011.

The owner of a .659 OPS against southpaws, the left-handed hitting Duda would fit best in a platoon with a right-handed bat. The former seventh round pick of the New York Mets has pop with 30 home runs last season, but he also reaches base — .340 OBP in 3,000-plus plate appearances.

The 31-year-old did miss significant playing time in 2016 with a stress fracture in his back. This may factor into the length of deal teams are willing to offer.

The former Mariner has logged 140-plus games in a season just twice in eight years. Moreover, Morrison owns a league-average slash line after 3,354 plate appearances. Considering Dipoto traded the 30-year-old in his first major deal as general manager, the likelihood of a Seattle reunion with LoMo seems remote.

Other notable free agents include Adam Lind, Mitch Moreland, Mike Napoli, and Mark Reynolds. It’s worth noting Lind and Washington Nationals share a mutual $5 million option. We’ll know within days whether both parties choose to stay together or part ways.

It’s unwise to underestimate the innovative deal making skills of Dipoto, even if he has a limited number of trade chips in his satchel. Here are several names to ponder around the hot stove.

Chicago may listen to offers for the 2014 AL Rookie of the Year, but the asking price would be steep. The rebuilding White Sox have commanded top prospects when moving key pieces such as Chris Sale, Adam Eaton, and Jose Quintana in the last 12 months. The club would certainly employ the same approach with any potential Abreu deal.

Having said that, teams acquiring Abreu would not only give up a large number of prospects. They’ll be paying him approximately $40 million before he becomes a free agent after the 2019 season.

As with the White Sox and Abreu, the Marlins would be in the driver’s seat during negotiations. The left-handed hitter owns a .843 OPS and has averaged 21 home runs during three full seasons in Miami. Bour’s 2018 salary is more appealing than Abreu’s — a projected $3.5 million in arbitration.

Perhaps, Miami’s new ownership group prefers swapping Bour as they reshape their organization. However, there’s no reason for the Marlins to move hastily. The 29-year-old is relatively inexpensive and under team control for three more years.

Acquired last season as an injury replacement for Freddie Freeman, the left-handed hitter owns a career .286/.333/.495 slash against righties. But, he’s ineffective against southpaws and requires a platoon partner too.

With his final year of arbitration approaching, Adams projects to earn $4.6 million. That’s a lot of money, if the up-and-coming Braves don’t plan to use the 29-year-old in a starting role.

If the Phillies believe September phenom Rhys Hoskins is the real deal, they may consider moving the right-hand hitting Joseph, who’s under team control through the 2021 season.

Susan Slusser of the San Francisco Chronicle reports Oakland is telling teams Healy is available for trades. The 25-year-old split time between both corner infield spots and designated hitter last season. Defense isn’t a strength, but he exhibited good power with 25 home runs.

Healy wouldn’t come cheaply through; he’s under team control through the 2022 season. Slusser believes Oakland may ask for relief arms in return. Interested suitors will certainly have to offer both upside and similar years of control to acquire the former Oregon Duck.

As noted earlier, Dipoto has a knack for creative deal making. Not all have worked out in his favor. However, Seattle did acquire the relatively obscure Haniger and Gamel last year and both were regulars in 2017.

Here are several potential pearls to ponder. There are others, but this quartet interested me most.

A mid-season acquisition, Cooper served as a stopgap until Greg Bird returned from the disabled list. With Bird poised to be New York’s first baseman for the foreseeable future, the 26-year-old may be available.

Cooper played in this year’s Triple-A all-star game just prior to heading to New York. To get the right-handed hitter, the Yankees traded away a minor league reliever. It’s reasonable to expect the price hasn’t climbed since July.

Prior to heading to the Big Apple, Cooper had impressive numbers with Class-AAA Colorado Springs slashing .366/.428/.652 with 29 doubles and 17 home runs in 320 plate appearances.

Yes, Cooper played his home games at altitude and was in the offense-friendly Pacific Coast League. But, he’s hit at all levels and may fit with a team looking for an inexpensive, low-risk option at first base.

During his last two seasons with Class-AAA Albuquerque, Patterson has slashed .288/.361/.512 and split his time between first base and right field. The 25-year-old could replace departing free agent Carlos Gonzalez in right field. That’s assuming the club doesn’t look outside the organization.

Colorado is a team on the rise. Therefore, it’s possible they pursue an established free agent for right field. Cough, cough, J.D. Martinez.

Another approach could be playing Patterson at first base. Although, the Rockies have other choices with veteran Ian Desmond or highly ranked prospect — Ryan McMahon.

Unfortunately, the 26-year-old has the dubious distinction of being in the organization with arguably the best first baseman in the game — Paul Goldschmidt.

The right-handed hitting Walker has little left to prove in the minors after his selection as the 2017 Pacific Coast League MVP. Perhaps, the Mariners and Diamondbacks could find common ground on a mutually beneficial deal like the one that brought Haniger to Seattle last November.

Voit sits behind major leaguers Matt Carpenter and Jose Martinez on the depth chart. Compounding matters, the 26-year-old is out of minor league options.

The right-handed bat has hit well in the minors. But, he’s not a Cardinals top-30 prospect, according to by MLB.com Prospect Watch. The former twenty-second round pick might benefit from a change of location.

Attempting to re-sign Alonso may be the Mariners’ best course of action. The club gave him for a two-month test drive and should know by now whether he fits in the clubhouse and their future plans.

Having said that, Dipoto may avoid expending resources on any free agent first baseman not named Yonder Alonso. If that’s the case, we could see another low-profile trade acquisition.

In that scenario, Cooper makes most sense — at least to me. He’d be a cheap and low-risk pickup with the tools to contribute.

In the end, Dipoto probably goes in a completely different direction than what I’ve suggested. After all, he’s earned the privilege of working in the GM suite by making wise choices.