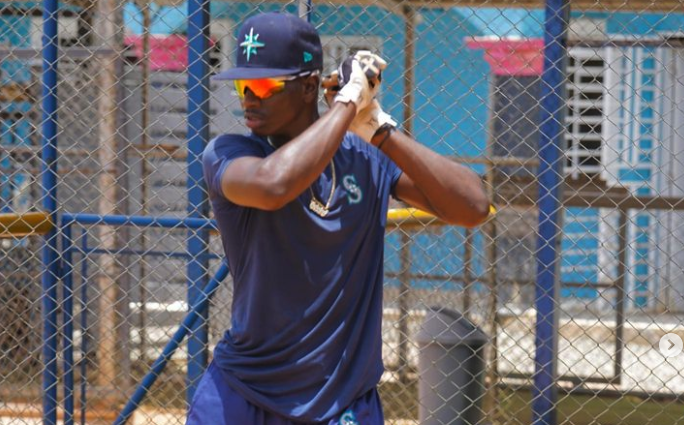 Over the past year or so, the Seattle Mariners have swapped promising young talent for prven big-league players on numerous occasions. The deals landing the club Luis Castillo, Jesse Winker, Eugenio Suarez, and Teoscar Hernandez cost the club several of its Top 20 prospects, including highly-regarded infielders Noelvi Marte and Edwin Arroyo, right-handers Levi Stoudt and Connor Phillips, and lefty Brandon Williamson.

The headliner is Felnin Celesten, a 17-year-old switch-hitter with a great chance to stick at shortstop. Reportedly, Celesten’s bonus is $4.7 million. The Mariners’ bonus pool is $6,366,900.

Mariners international scouting director Frankie Thon Jr. had this t say about Celesten, who hails from the Dominican Republic, via the club’s press release:

“Getting to know Felnin as a person has been just as rewarding as getting to evaluate him as a player. The flair, confidence, and swagger that he displays between the lines, is complimented by a soft-spoken, polite, and thoughtful disposition off the field. Felnin certainly has all the ingredients to eventually grow into an impactful member of the Mariners organization, in every sense of the word.”

The Mariners also signed the following players, officially, on Day 1 of the open signing period:

OF Kevin Alcantara (17)
Thon Jr.: (Alcantara) is a 6-foot, left-handed hitting outfielder out of the Dominican Republic. He one of the best gap-to-gap hitters in the signing class, complimented by solid defensive skills.

2B Delfry Carrasco (18)
Thon Jr.: (Carrasco) is a 5-foot-9 infielder who has the versatility to play several positions within the infield. At the plate, the left-hander has an on-base driven approach.

C Sebastian De Andrade (16)
Thin Jr.:(De Andrade) is a 5-foot-9 catcher from Venezuela, who is praised for being one of the more aggressive hitters in the 2023 international class. He is well known for his solid defensive tools behind the plate.

RHP Kendal Meza (17)
Thon Jr.: (Meza) is a 6-foot, right-handed pitcher out of Nicaragua. He is a power pitcher, already sitting in the mid-to-low-90s with his fastball at 17-years-old, with a chance for high-end velocity in the future. He pitches with an up-tempo aggressive delivery, with a solid breaking ball serving as his best secondary pitch.

RHP Ruddy Navarro (16)
Thon Jr.: (Navarro) is a 6-foot-1, right-handed pitcher out of the Dominican Republic. He’s a good athlete who currently relies on a solid fastball and changeup mix, while working on developing a slider.

OF Kay Robles (18)
Thon Jr.: (Robles), a 6-foot-2 outfielder out of the Dominican Republic, is one of the bigger athletes in the 2023 international class. He is unique athlete with above average speed and surprising raw strength, projecting as a centerfielder with tools for the position.

The Mariners also are expected to sign RHPs Dylan Wilson of Curacao and Jeter Martinez of Mexico, among a small handful of others, likely occuring Tuesday, per Joe Doyle.