Saturday: No. 2, No. 1
Monday, March 1: Best Tools
Tuesday, March 2: How many Mariners prospects would be No. 1 elsewhere?
Wednesday March 3: Projected 2024 Lineup, Rotation, Bullpen 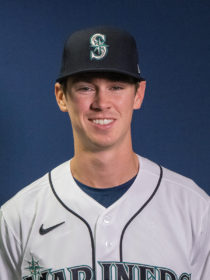 3. Emerson Hancock, RHP
Hancock has yet to throw a professional pitch but entered last spring as the favorite to go No. 1 overall in the draft. A few hiccups along the way pushed him down to the Mariners at No. 6, including two below-average starts of the four he made before his season was shut down in March. He also suffered a Lat strain in April his sophomore year, finishing unevenly.

There are questions about his fastball, but not significant concerns; it’s a natural-sinking fastball he throws with plane and has yet to learn to attack the top of the zone in order to get more swings and misses from the pitch. But he’s comfortably 93-95 mph and up to 99 and generates some run to his arm side, which helps set up his secondaries.

His best offspeed stuff includes an above-average changeup that flashes plus or better and can generate whiffs as he buries it off the fastball, and a sharp slider that darts down and away from right-handed batters and at the back foot of lefties.

His curveball projects well, but like Gilbert it’s not likely to become an out pitch, instead a good weapon early in counts and versus left-handed bats to keep them off the straight stuff.

Hancock is a superior athlete with a fluid, repeatable delivery, finishing strong and inline from a slightly-below three quarters arm slot. He stays closed and employs his lower half well, generating an aggressive, long stride toward the plate, yet stays on top well to keep everything on plane or with downward break.

His sound mechanics help him throw strikes with his entire arsenal, and pitch effectively to both sides of the plate with the fastball. His plus control should lead to with plus command.

Hancock profiles as a very good No. 3, but there’s a relatively strong chance he ends up a No. 2 with some dominant traits, including two out pitches and a fastball capable of generating ground balls as well as swings and misses when he attacks at or above the hands.

If things work out right, Hancock is a strikeout pitcher with some solid-average ground ball tendencies, though some of the latter could be tempered by the club’s attempts to get more from his velocity high in the zone.

Hancock probably headed for Everett to start 2021 and with some workload limits, but I expect him to move quickly through the middle of the minors and put himself in the big-league conversation in a year, year and a half, suggesting Opening Day 2023 is a real possibility, sans service time manipulation.

While Hancock and Carrasco are built differently now, there are some similarities in body, style, and especially (potential) performance.

Carrasco uses a two-seamer to mix up the fastball and gain varying movement, something Hancock does, at present, with the four-seamer, but both pitchers use slider-changeup before curveball, but have the slower of the two breakers in their hip pocket.

Carrasco has three 5-win seasons despite being unable to remain fully healthy most of his prime, so keep that in mind when wondering if Carrasco is the right comp. There’s 6-win upside here with Hancock.

His edge over Gilbert is minimal, but real, despite the No. 4 prospect holding edges in present probability and ETA, as well as projected fastball value. Hancock carries more ceiling, yet not a lot more risk in spite of all of the above. He’s a better athlete, too, and even with the 2020 MiLB season being canceled got deeper into his development sooner than did Gilbert.

2021-02-25
Previous Post: Mariners Prospect Rankings: No. 4 — Logan Gilbert, RHP
Next Post: How Can Anyone Know Whether Jarred Kelenic Is MLB Ready?