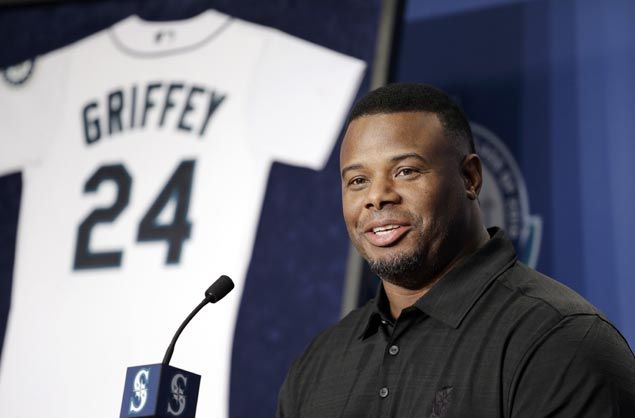 Last week, history was made for both the Seattle Mariners and their weary fans. First, the best player to ever don a Mariners uniform – Ken Griffey Jr. – was selected for induction into the baseball’s Hall of Fame with the highest vote percentage ever recorded during the Hall’s 80-year history.

Then, the club unexpectedly announced that “Junior” would be the first Mariner to have his uniform number retired. From this point forward, no one will ever wear the number 24 at any level within the organization.

Although I didn’t live in the Pacific Northwest at the time, I’d like to believe that such great news would help fans let go of any lingering bitterness over the trade that sent Junior to the Cincinnati Reds before the 2000 season. Fan strife over the departure of a sports icon is understandable.

Like I said, I’m not from the local area. But, I’ve seen icons leave my hometown too. During my youth, I endured the trade of Tom Seaver by the New York Mets to those same Reds, plus I witnessed the New York Nets’ sale of basketball icon Julius “Dr. J.” Irving to the Philadelphia 76ers. Seeing Seaver leave hurt, a lot.

With that said, fan reaction to trades involving icons can differ from city-to-city and can be largely dependent on a number of factors, including the talent and personality of the player and how they were perceived by fans. Since I wasn’t around to experience the departure of Junior, I performed a very unscientific survey in order to better appreciate how fans felt when Griffey left town.

Who did I canvas during my survey? My wonderful wife, my in-laws, Seattle friends, people at Starbucks – it is Seattle after all – and finally bartenders and patrons at my favorite watering hole. Plus, I listened to what local sports media personalities had to say on the subject and – naturally – I read social media comments.

My informal fact-finding mission left me with the impression that fans remain divided on who was at fault for Griffey leaving town. Some fans blame the organization for brokering the move and not doing enough to keep Junior.

Others put the onus on the player and his agent for forcing a deal out of town. That group tends to be incensed by public comments that Cincinnati was the only city that he’d waive his no-trade rights for, which effectively reduced the Mariners’ leverage during trade negotiations with the Reds.

Regardless of where people come down on this touchy and emotional issue, the Mariners actually dealt Griffey at the right time.

Yes. Endorsing the idea of trading the Mariners’ most beloved player is going to cause a seismic-type reaction throughout the Pacific Northwest similar to the one registered when I recently defended Jack Zduriencik. As with my defense of the former Mariners general manager, I believe that I can make a credible argument supporting the Griffey trade. This time, it’s an open and shut case.

That may be difficult for some fans to digest. However, when emotion is taken out of the equation, statistical analysis proves that the team and Hall of Fame general manager Pat Gillick made the correct choice to move their best known and most gifted player after the 1999 season.

Before presenting the rationale that I believe supports my contention, I should first establish Griffey’s value during the seasons leading up to his exit from the Emerald City. Doing so helps demonstrate Junior’s greatness, while simultaneously justifying the fan outrage that accompanied his departure.

Here are the top-10 players from the time Griffey debuted as a 19-year-old in 1989 until his departure for Cincinnati – based on Baseball Reference’s wins above replacement (WAR). Clearly, he was one of the very best players in the game during this 11-year span and on a Hall of Fame trajectory when he left Seattle.

Only one player – also the son of a former major league player –  provided more value to his ball club than Griffey during those 11 seasons. Barry Bonds had a higher WAR, but Junior outpaced him in hits and home runs despite having played in 58 fewer games.

The vast majority of the players listed above have either been enshrined at Cooperstown or should be honored by the Hall. Perhaps, Junior’s former teammate – Edgar Martinez – will join the ranks of the inducted during his last three years of eligibility. From a dispassionate numbers-based perspective, Edgar’s offensive excellence makes the case that his legacy needs to be reconsidered by voters.

There’s no doubt that Junior was one of the best all-round players of his or any era. Not only that, he was the preeminent center fielder during the years leading up to his departure from Seattle. Take a look at his offensive production during the four seasons prior to the Cincinnati trade, which validates his standing among his peers. When compared to other top center fielders during that time-frame, he provided significantly more value. Again, it’s easy to see why fans were so disappointed to see him go.

So far, I’ve done a better job of making a case against a Griffey trade. But, I still maintain that the Mariners made their deal with the Reds at the right time.

Yes, it’s true that Junior was one of the two best players in all of baseball – an all-time great. However, he had already peaked by the time of the trade. During his first 10 seasons in Seattle, Griffey averaged 6.6 WAR. But, his value decreased to 4.9 during his final season with the club. Unfortunately for the superstar, he’d only surpass that level of value one more time during the second half of his career.

Don’t get me wrong, Griffey was still very good in 1999. He, once again, won Silver Slugger and Gold Glove awards and garnered MVP votes. Both he and Edgar were tied for the twentieth highest WAR that season. Heck, imagine if the 2015 Mariners had a center fielder valued at 4.9 WAR?

If Griffey was on last year’s club, he would’ve ranked second only to Nelson Cruz and just ahead of Kyle Seager and Felix Hernandez in value. Not only that, Junior’s 4.9 WAR would have ranked number-nine among major league center fielders in 2015. Nevertheless, his decline was imminent.

Griffey’s best season with the Reds was his first in the Queen City when he finished 2000 with a strong .271/.387/.556 triple slash, plus 40 home runs and 5.5 WAR. Although he’d be invited to two more all-star games after his first year in Cincinnati, he’d never again attain all-star level value in terms of WAR.

Take a look at Griffey’s production from his first four seasons with the Reds and you’ll see that his standing among his peers had dropped considerably despite the fact that he was still relatively young.

Certainly, Reds officials weren’t concerned about any degradation in Griffey’s performance in Seattle when they traded for him and signed him to a nine-year/$116.5 million extension. I’m sure that the club expected to get at least five good years from Junior and win a championship. Unfortunately for both the player and the organization, neither happened..

After being arguably being the best player of the twentieth century’s last decade, Griffey was mid-pack performer – at best – during the new millennium. Clearly, his decline was driven by injuries and the lack of availability that followed.

For the Reds, the only winning season they had with Junior was his first with the team when they won 85 games in 2000. They averaged 74 wins for the remaining seven full seasons that he was in Cincinnati.

I chose to show Griffey’s first four seasons in Cincinnati on the preceding table so I could compare Griffey to the best player that the Mariners received in exchange for the future Hall of Famer– Mike Cameron.

Although the club received four players for Junior, only Cameron provided Seattle with tangible value during his time with the team. The player affectionately known as “Cammy” proved to be more than capable of filling the defensive void in center field created by Griffey’s departure. Plus, he delivered something during his four-year tour in Seattle that Junior couldn’t match during the same time-frame in Cincinnati – availability.

When Cammy arrived in Seattle, he was just three years younger than Griffey. Yet, between 2000 and 2003, he played in 231 more games and delivered 10.3 more WAR than his predecessor. He even hit one more home run, although that’s more indicative of Griffey’s lost playing time than Cameron’s power. Cammy wasn’t the only center fielder who outperformed Griffey. As the preceding table illustrated, his WAR ranked number-16 among big league center fielders.

The sad reality is that the injury bug and father time started to erode his unmatched gifts and diminish his availability after he arrived in Cincinnati. During his eight complete seasons with the Reds, Griffey averaged just 102 games-per-season after averaging 146 with Seattle when the strike-shortened 1994 season is excluded. Unfortunately, the player who was referred to as “The Kid” when he first arrived on the scene had been betrayed by his aging body.

Obviously, no one could’ve projected the dramatic decline of Junior’s generational talent. Unfortunately, health issues prematurely robbed this all-time great of his ability to consistently produce and wow fans throughout the majors.

Some may argue that the turf in Cincinnati’s Riverfront Stadium was the main culprit behind Junior’s rapid descent and he would’ve stayed healthier and if he stayed in Seattle. Those who subscribe to that theory may go a step further and say that a healthy Griffey would have put the 2001 Mariners over the top and propelled the team to its first World Series appearance and — gasp — a championship. That’s a slippery slope though.

If Seattle had found a way to retain Junior’s services, there’s a distinct possibility that the club wouldn’t have signed Ichiro Suzuki prior to their record-setting 2001 season. Would the Mariners have won 116 games without the player who won a batting title, the American League MVP and Rookie of the Year awards, and a Gold Glove that year? I guess we’ll never know.

What we do know is that the record book says that Ichiro earned all of the accolades I just listed and Junior delivered starter-level 1.9 WAR, while playing in just 111 games for the 70-win Reds during that memorable season. The bottom line is that Gillick made the deal at the right time, whether he planned it that way or not.

Although I firmly believe that statistical analysis demonstrates that the Griffey trade was perfectly timed from Seattle’s perspective, I sympathize with those who were so disappointed by his departure in 2000. After all, loving baseball and its players isn’t all about the stats.

Hopefully, Mariner fans can take some solace in the fact that Junior reached Cooperstown thanks to those 11 special years in the Pacific Northwest and not what followed afterwards. That’s why he’s the first player to enter the Hall of Fame as a Mariner and why he’s still so beloved in Seattle.

Yesterday was an emotional day in my house. My wonderful wife – a lifelong Seattle Mariners fan – was so...