Daniel Vogelbach Has Something Left To Prove In 2020

When Daniel Vogelbach finally got his chance to play regularly last year, he rewarded the Seattle Mariners with a team-leading 30 home runs and an All-Star game appearance. Yet, Vogelbach enters 2020 with something left to prove.

If all you knew about Vogelbach was his 2019 stat line, the notion anyone could have lingering doubts about him might seem preposterous to you. Not only did the left-handed hitter pace the Mariners in homers and runs scored, he ranked second among regulars in OBP and wRC+ behind former teammate Omar Narváez.

Vogelbach’s success was attributable to a potent power bat combined with an advanced on-base ability fostered by a sharp grasp of the strike zone. Among qualified hitters, only Mike Trout and Alex Bregman (18.3) and Yasmani Grandal (17.2) bettered Vogey’s 16.5-percent walk rate.

With so much going right for Vogelbach, why the concern?

Vogelbach was the Mariners’ most productive hitter for much of last season. Unfortunately, his offensive prowess vaporized by the time the July 31 trade deadline rolled around.

Some may suggest Vogelbach was already regressing prior to August, which I don’t dispute. However, if the Florida native’s season ended on July 31, his year would’ve received a completely different narrative than it did. Furthermore, his struggles became glaringly obvious in August-September.

So, what went wrong?

From my perspective, a multitude of factors conspired against Vogelbach. The significance of each is up for debate.

Problems With The Lefties

Despite a notable disadvantage against lefties, Vogelbach did manage to draw walks at an above-average rate, while strikeouts remained relatively stable. On the other hand, his power numbers withered.

Vogelbach’s difficulty against like-handed pitching is indisputable. However, a closer review of his platoon splits suggests more was going on than simply problems with the lefties. To establish this point, I divided the All-Star’s platoon splits into the two segments noted above.

For this exercise, I’ve turned to a fun capability FanGraphs provides. The site’s splits tool permits us to segregate a player’s stats in a variety of ways and create the following table.

While Vogelbach struggled solely against southpaws during the best phase of his season, he experienced difficulties confronting both lefties and righties during the latter part of 2019.

By July, Vogelbach was facing more infield shifts as teams attempted to dampen his success. To illustrate the potential impact on the 27-year-old’s productivity, I compared changes in the percentage of shifts employed against him and his wRC+.

Please note shift percentages are based on balls put into play. Additionally, league-average wRC+ is always 100. Therefore, Vogelbach’s 132 wRC+ in March-July suggests he was 32-percent more productive than a league-average player was during that span. 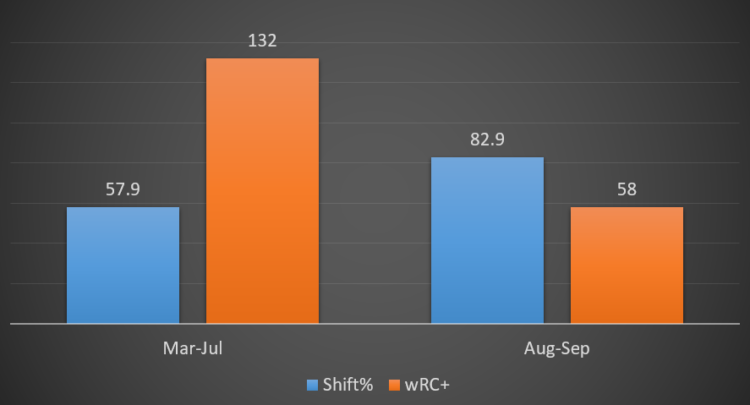 Expected wOBA is a STATCAST product using quality (exit velocity and launch angle) and quantity (strikeouts and walks) of contact to determine what should’ve happened to balls put in play.

Look at xwOBA this way. Pitchers and hitters can affect exit velocity, launch angle, strikeouts, and walks. But they have no control over a ball once it enters the field. By examining Vogelbach through the lens of xwOBA, we can assess his effectiveness minus defense.

As you can see, Vogelbach’s xwOBA remained well above average until his late-season decline. Sure, the shifting hurt actual outcomes on balls in play. But Vogey’s difficulty with making solid contact was more pivotal to his downfall.

To see what I mean, let’s look at several contact-related factors contributing to his xwOBA and his slash-line cratering.

According to STATCAST, barreled balls have the perfect blend of exit velocity and launch angle typically producing a minimum .500 batting average and 1.500 slugging percentage. We’re talking about home runs and screaming line drives.

Vogelbach’s 10.8-percent barrel rate for the year ranked number-41 among hitters putting 300-plus balls in play. Through July 31, Vogey was top-25 matching Bryce Harper and just ahead of NL MVP Cody Bellinger and Josh Bell (13.1), and Freddie Freeman and former teammate Domingo Santana (13.0).

As you can see, Vogelbach’s barrel rate fell off drastically during the last two months of the season. Among hitters with 50-plus balls in play, he ranked 253 of 329. His barrel rate in August was just two-percent.

Intuitively, we realize barrels and similarly well-struck balls are vital to Vogelbach sustaining success. His summer swoon coincided with a steady increase in ground balls, which literally played right into the hands of shifting defenders.

By August, the two measurements were virtually equal. That’s a problem for a player relying on his power stroke to produce, especially one who’s slow-footed.

That’s not a slight towards Vogelbach whatsoever. However, only eight players with 100-plus measured runs were slower than his 24.1 ft/sec sprint speed last season. Since he’s not going to routinely leg out grounders, hitting the ball in the air with authority is paramount.

Vogelbach was also making considerably less contact on pitches in the strike zone during the waning days of 2019. The following illustrates the percentage of pitches he saw in the zone, swing and contact rates on those pitches, and swinging-strike percentage on all pitches.

The ratio of pitches Vogelbach saw in the zone and the frequency he swung at them remained steady. Yet, he made significantly less contact and whiffed on pitches more often.

Is it possible pitchers modifying their tactics against Vogelbach disrupted his productivity later in the year?

Teams changing their approach towards successful hitters is part of baseball. Defensive shifting is one method of doing so. Another is altering pitch selection and sequencing.

A review of the type pitches Vogelbach was seeing as the season progressed hint at a changing strategy against the slugger.

Vogelbach’s diet of four-seam fastballs remained relatively stable. But we see there were noticeable changes in other percentages later in the season.

It’s reasonable to believe changing approaches by opposing pitchers had a second order effect of reducing Vogelbach’s success against all pitches later in the season. This potentially explains his dwindling success against pitches he was crushing earlier in the year. Specifically, four-seamers and sliders.

Changes In xwOBA vs Pitches

There’s one more issue worth discussing, although it isn’t quantifiable with metrics. Still, every human deals with it.

Vogelbach’s demeanor seemingly changed late in the season, which suggested frustration with his situation. Per Ryan Divish of the Seattle Times, Mariners manager Scott Servais verified this during the team’s pre Spring Training luncheon.

“Vogey got down on himself. He got very negative, and it doesn’t get any better when it goes that way.” — Scott Servais

It’s plausible Vogelbach’s initial regression was some combination of the factors previously discussed, but then exacerbated when he got down on himself. Most us, including me, can relate to Vogey’s predicament.

Assuming Vogelbach learned from his late-season collapse and grows from it, there’s a reasonable chance we’ll see 2020 stat-line resembling what he produced through the first four months of 2019. That’s what I’m expecting from the former second-round pick.

Perhaps then, Vogey won’t begin another season with a shadow of doubt hanging over him.

Jason A. Churchill dives deep on Yusei Kikuchi and also discusses Cal Raleigh's 2020 outlook and whether or not his...