Even the most patient Seattle Mariners fan must be questioning the team’s use of reliever Rafael Montero in high-leverage situations. That’s the exact circumstance Montero faced against the A’s last night. The end result – two runs surrendered in the eighth inning of a game that Seattle was trailing by a run and eventually lost 4-1.

So, why is Mariners manager Scott Servais turning to Montero late in a key game against a division rival?

It’s a legitimate question. After all, Montero’s conventional and advanced stats verify what we’ve been witnessing with our eyeballs – he’s been regressing with each passing month.

Even an ardent believer in Montero’s stuff like me was perplexed by Servais’ decision to hand the ball to his enigmatic reliever in last night’s game. Since the rationale for using Montero escaped my pea-brain, I did what I always do when I can’t solve a baseball mystery. I turned to Prospect Insider founder Jason A. Churchill.

A quick chat with Jason enlightened me to an obvious issue with Seattle’s bullpen that’s in plain sight for all of us to see. Reliever utilization can be problematic for the Mariners when closer Kendall Graveman isn’t available.

By now, most Mariners fans are aware that Graveman has a benign tumor on his cervical spine that led to his conversion from a starter to a reliever last year. A consequence of the tumor is the right-hander isn’t available as often as other arms in Seattle’s bullpen. Graveman has pitched on 0-1 days rest less frequently (33.3-percent) than only one other Seattle reliever appearing in 20-plus games this year – Keynan Middleton.

Think about it for a moment. Any time Graveman isn’t available to pitch the ninth inning or any high-leverage situation, Servais must lean on other arms in the bullpen to get the job done. So, why didn’t the sixth-year manager do exactly that last night and steer away from Montero?

Reasonable question until we review Servais’ options. He had already used JT Chargois and Drew Steckenrider prior to Montero and Anthony Misiewicz pitched the ninth inning. Assuming Middleton and Erik Swanson weren’t available because they pitched the day prior, the skipper was short on alternatives last night.

There was Paul Sewald, who Servais may have been holding in reserve for a save situation. Then again, he could’ve turned to Héctor Santiago. Oh, that’s right, Santiago’s roster spot is open because he’s serving a ridiculous 10-game suspension. Realistically, Servais didn’t have any other options, assuming Graveman was unavailable.

To those fans screaming that the Mariners should just get rid of Montero, I hear you. Maybe that happens today or in the near future. But there appear to be few viable replacements waiting in the wings.

Perhaps Casey Sadler, who’s about ready to return from the IL, is the answer. But prior to his injury, Sadler pitched on 0-1 days rest in 28.5-percent of his games – less often than Graveman and Middleton. Considering Sadler has been sidelined with shoulder inflammation since April 30, it’s possible the team takes it slowly with the 31-year-old when he does return.

Other than Yohan Ramirez, there isn’t a clear-cut replacement on the 40-man roster. And even if the team replaced Montero with Ramirez or Sadler, doing so doesn’t solve the bigger problem facing the Mariners – having high-leverage relievers, who aren’t available on a more frequent basis.

No, I’m not blaming Montero’s ineffectiveness on Graveman, Middleton, or even Sadler. He’s the root cause of his problems. But having several relievers unable to throw on 0-1 days rest as often as their peers leads to suboptimal matchups – like last night’s game.

If the Mariners had a full complement of relievers capable of going on short rest, keeping a project like Montero on the major-league roster would be more practical than it is now. A large segment of fans would argue that the veteran of seven seasons isn’t worth the trouble.

Montero’s Statcast profile illustrates the potential that I believe he possesses. I suspect the team’s analytics department and coaching staff may agree with me to some degree. 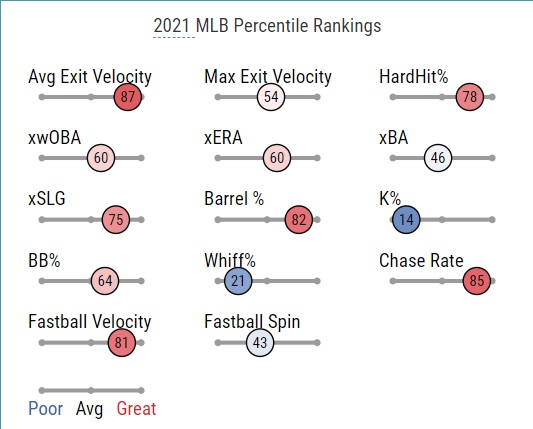 I know. Potential doesn’t win ballgames and that’s a big deal for the Mariners and the fan base right now. But cutting ties with Montero won’t address the team’s bigger issue and could make matters worse without a suitable replacement to fill the void created by his absence.

Let’s not forget that Seattle has already parted ways with another workhorse – Will Vest. The combined loss of Vest and Montero, who’ve accounted for 21-percent of the team’s relief innings this year, will only make Servais’ already tough job even more challenging.

Realistically, jettisoning Montero would provide instant gratification for fans. But doing so won’t necessarily make the Mariners better at a critical time in their schedule.

Only help from outside the organization can do that.