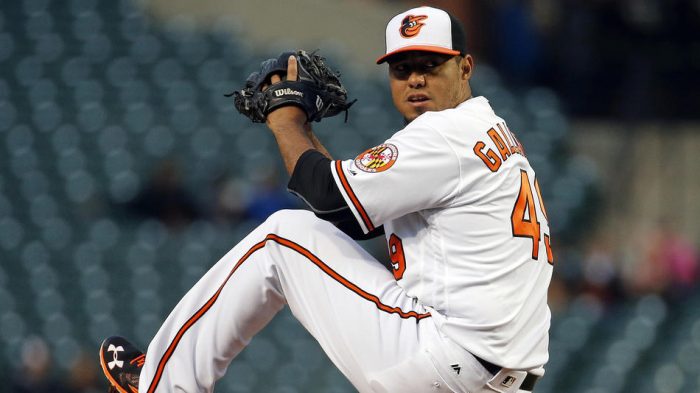 Ever since the Seattle Mariners traded right-hander Taijuan Walker earlier this offseason, the club has been searching for an experienced arm for the middle of their rotation. According to general manager Jerry Dipoto, the club got its man today when they acquired starting pitcher Yovani Gallardo from the Baltimore Orioles in exchange for outfielder Seth Smith.

A veteran of 10 seasons, Gallardo is set to make $11 million this upcoming season and can become a free agent afterwards, if the Mariners don’t exercise a $13 million team option for 2018 and elect to pay a $2 million buyout instead.

Whether the Mariners’ newest acquisition is enough to nudge the club from fringe contender to a legitimate threat is debatable. It’s not even certain that his presence guarantees an improved rotation.

While Gallardo has a long history of durability with 267 career starts and postseason experience on his resume, he’s been exhibiting signs of wear and tear over the past few seasons. This became readily apparent in 2016.

After tossing 180 or more innings in eight consecutive seasons, Gallardo was limited to just 23 starts and 118 innings during his lone season in Baltimore due to early-season shoulder issues. Moreover, his fastball velocity and most of his significant pitching metrics have been trending in the wrong direction for the last three seasons.

Essentially, Gallardo’s 2016 issues and recent decline adds more intrigue to a rotation that was already chock full of unanswered questions entering the offseason.

Hernandez is approximately the same age as Gallardo and has also been declining over the last few seasons, while Iwakuma — who’s never pitched 180 innings in consecutive seasons — threw 199 last season and will be 36 in April.

On top of that, it’s taken Paxton four seasons to reach 50 starts due to injuries and inconsistency. While he demonstrated positive signs of development last season, he remains an enigma for now. Throw in those unproven number-five starters and you have a smorgasbord of uncertainty and an ill-advised reliance on hope.

The other side of this deal — the loss of Smith — has the potential to negatively influence the Mariners’ competitiveness also.

Assuming Seattle doesn’t add another experienced outfielder — big assumption — the departure of Smith likely leads to more playing time for rookie Ben Gamel in one of the corner outfield spots. The left-handed hitter was acquired last August from the New York Yankees, but has been generally viewed as a fourth outfielder.

Having said that, it’s only early January. Therefore, it’s quite possible Seattle will attempt to add another outfielder prior to the start of the season. Hopefully, not before I publish this piece though.

While the outfield may receive more help, it appears Dipoto is satisfied with his stable of starters. That’s perplexing since I’d rank the current Mariners’ rotation as third best in the American League West and that’s not saying much.

Sure, if Gallardo reverts to his pre-2016 form, there will be upside to this deal. Otherwise, he won’t be the answer. He’ll just be another question mark in a rotation already full of uncertainty.