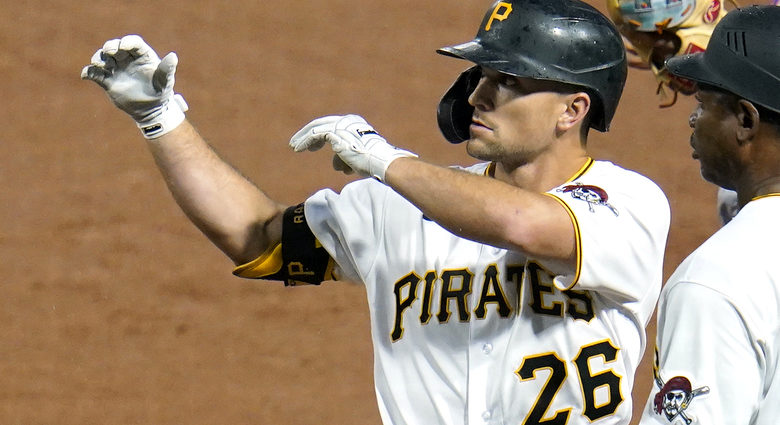 The Seattle Mariners added a second baseman today. But not that second baseman. Instead, Seattle acquired Adam Frazier from the Padres for minor leaguers Ray Kerr and Corey Rosier. While Frazier is not the marquee name some Mariners fans were hoping for, the 29-year-old is a good start to the offseason for President of Baseball Operations Jerry Dipoto.

Financially, adding Frazier has little impact on the Mariners’ payroll. Per MLB Trade Rumors, he projects to earn $7.2 million in his final season before free agency. Even with his estimated salary added, Seattle’s 2022 player budget is hovering around $48 million when we include guaranteed contracts and current arbitration-eligible players. Beyond the dollars and cents, Frazier should prove to be a big on-field asset for his new team.

For the moment, Frazier projects to play second base, a position of need for the Mariners since the departure of Robinson Canó after the 2018 season. The left-handed hitter’s presence not only addresses a glaring infield hole, it lengthens a lineup that ranked near the bottom of MLB.

With a 25.2% hard hit rate that ranked 131st among 132 qualified hitters this year, Frazier’s bat doesn’t possess much pop. However, the Mississippi State product was one of the better hitting second baseman and even tied Houston’s Jose Altuve for most hits.

Despite a lack of power, the control-the-zone approach of Frazier is a quality the Mariners value in hitters. To that point, his 12.4% swing and miss rate was fifth lowest in the majors last season. For context, J.P. Crawford led Seattle with the 20th best rate (15.5%).

Frazier also hits the ball to all fields, which means he doesn’t deal with defensive shifts on a regular basis. In 2021, he faced a shift during just 18.1% of his plate appearances and produced a respectable .324 wOBA.

Platoon-wise, the handedness of pitchers hasn’t affected Frazier’s productivity. The six-year veteran boasts a career 120 wRC+ against right-handers and 114 wRC+ when facing southpaws.

It’s worth noting Frazier’s numbers declined after the Pirates dealt him to the Padres in July. That said, he did slash .318/.381/.420 in the final month of the season when the Friars were fighting to stay alive in the postseason race.

Another fact we shouldn’t overlook – Frazier had a career-year in 2021. Therefore, it’s possible he doesn’t achieve the same level of success with the Mariners next year. Still, the Georgian represents a potentially significant improvement over what Seattle received from its second baseman this year. Even if he doesn’t duplicate his 2021 production next season.

To illustrate this point, I compared Frazier’s career averages to the numbers collectively delivered by Mariners second basemen in 2021. Also included, Seattle’s MLB rank in each category.

As you can see, Frazier represents the opportunity for a major upgrade over what the Mariners received from the second base position this year. Obviously, the player has to perform up to his career averages and remain healthy. But it’s reasonable to expect that Frazier can deliver in 2022.

In a broad sense, Frazier’s offensive profile is similar to Crawford’s. Neither player relies on power to produce offense. Instead, they focus on putting bat-to-ball and using excellent plate discipline. Just for fun, I compared their combined numbers for the past two seasons.

It’s likely Frazier hits near the top of the Mariners’ order. Perhaps he leads off or follows Crawford in the number-two spot. Regardless of where he appears in the lineup for manager Scott Servais, Seattle’s newest player should provide more RBI opportunities for Ty France, Mitch Haniger, and everyone else hitting behind them in 2022.

Not only should the Mariners receive an offensive boost from Frazier, he’s capable of playing providing strong second base defense. Since the start of the 2019 season, his 18 defensive runs saved (DRS) rank third best among MLB second baseman with 1000-plus innings. Furthermore, the sixth round of the Pirates in the 2013 MLB June Amateur Draft is capable of moving around the diamond.

With the Padres wanting to create budget flexibility, the Mariners were able to simultaneously oblige San Diego and add a player in his prime capable of enhancing their lineup and defense. Even better, Dipoto did so without parting with significant prospect capital. Now, we wait to see what the Virginia Commonwealth alum does for an encore.

As of Thanksgiving weekend, Frazier projects to be Seattle’s Opening Day second baseman with Abraham Toro the most likely option to man third base for Servais. But so much could change in a good way for the Mariners between now and Opening Day.

Thanks to Frazier’s positional versatility and relatively low salary, Dipoto can continue to aggressively pursue premium, high-dollar free agents at multiple positions. That means studs like Marcus Semien or Trevor Story remain in play for the Mariners.

And that’s the most exciting part of today’s deal for me.