Looking for trade clues in Dipoto’s past 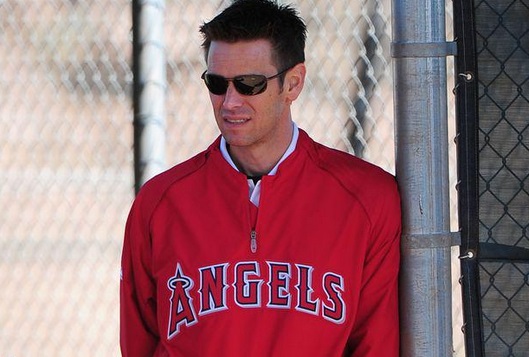 Since arriving in Seattle, Mariners general manager Jerry Dipoto has proven to be an aggressive deal maker. Thanks to his efforts, the Mariners are on the edge of contention as the club approaches the all-star break.

A winning record during the first week of July has been a rare occurrence in Seattle. So, naturally, fans want the front office to aggressively pursue upgrades in the trade market. They’re tired of the franchise’s 14-season playoff drought, which happens to be the longest current streak of futility in the majors.

With that fan excitement in mind, Prospect Insider founder Jason A. Churchill published a series of comprehensive pieces that identify potential — and realistic — trade targets who could help the Mariners get over the playoff hump. If you haven’t already read his superb analysis, you can find it here.

Undoubtedly, Seattle needs to make moves similar to the ones suggested by Jason. Otherwise, they won’t be playing October baseball this year. They need help with their starting staff and bullpen, plus another another corner outfielder.

That’s a lot of holes to fill, especially for an organization with a minor-league system than ranked in the bottom 10-percent of the majors prior to the start of the season. What happens if Dipoto can’t satisfy all of his roster needs with big moves because he doesn’t have enough trade chips? That’s a distinct possibility.

Making big deadline deals sounds so easy. But, the Mariners won’t be operating in a vacuum. They’ll be competing against many clubs with far superior farm systems. It may turn out that Dipoto will have to load the majority of his bait into one deal. He may only get one big fish in return. Then what?

As I pondered the possibility that the Mariners may have to go big AND search the discount rack, I came up with novel idea on how to search for lower-tier players who could help the team. The moves I’m talking won’t excite fans, but could improve the roster nonetheless.

Instead of simply scouring stat sheets for players who could help the Mariners, I decided to narrow my search for players who share a common history with Dipoto. Not following me? Please let me explain.

Last offseason, the Mariners added no less than 14 players who previously crossed paths with their general manager in other organizations. Not all of these players have made an impact for Seattle or are even with the club anymore. But, a few have made their presence known.

The two most notable examples of players with Dipoto are catcher Chris Iannetta and starter Wade Miley. Iannetta was in the Colorado Rockies system when Dipoto was working in their organization. The 48-year-old executive must have liked what he saw while with Colorado. His first trade as Los Angeles Angels general manager was acquiring Iannetta from the Rockies. In Seattle, Dipoto’s first free agent signing from outside of the organization was the 33-year-old catcher.

In Miley’s case, Dipoto was Director of Player Personnel for the Arizona Diamondbacks when the left-hander was a first round selection of the organization during the 2008 amateur draft. Years later, he reunited with the southpaw by acquiring him up in a deal with the Boston Red Sox.

The most recent deal with a Dipoto connection involved starting pitcher Wade LeBlanc, picked up in a minor deal from the Toronto Blue Jays just two weeks ago. Entering today, this move looks like a stroke of genius. Perhaps, the southpaw won’t sustain his initial success — he struggled today. But, adding LeBlanc was a low-risk maneuver, which was easier to execute thanks to the fact that Dipoto — and manager Scott Servais — were familiar with the 31-year-old.

The trio I’ve mentioned aren’t the only ones who share a past with their general manager. Here are all of the players who’ve passed through the Mariners organization since Dipoto took the helm in September. Some are no longer around, while others are with the big-league club or playing with Class-AAA Tacoma. It’s worth noting that Shawn O’Malley was with Seattle prior to the new general manager taking over.

So, what exactly will be I be looking for? Obviously, a previous association with the Mariners general manager is a must. Otherwise, they’ll be less notable — and less expensive players — capable of filling a need or shoring up the club’s depth in Seattle or Tacoma.

I focused on the positions previously mentioned, although I did include a middle infielder. Also, all of the players identified play with clubs that, in my estimation, are no longer contenders. My friends in western Pennsylvania may not agree though.

Matt Joyce, OF — Pittsburgh Pirates
Acquired by Dipoto in December 2014, the 31-year-old corner outfielder is having a solid year for the Pirates and owns a career .340 on-base percentage (OBP) during nine seasons. Joyce is succeeding against southpaws this year, but his career .188 batting average against lefties suggests he’s better suited for a left/right platoon. The veteran is a free agent at the end of this season.

Gordon Beckham, INF — Atlanta Braves
Some may wonder why I’d list an infielder. If you’re leaning forward, why not try to improve the bench? Beckham, who Dipoto previously acquired as a rental player during the Angels’ stretch run in 2014, has split his time between second base, third base, and shortstop this season. Having someone who entered today with a .284/.382/.442 triple-slash would be a significant offensive upgrade, especially if Robinson Cano, Kyle Seager, or Ketel Marte were lost for a few days.

A.J. Schugel, RP — Pittsburgh Pirates
Here’s a name that might register with some Seattle fans. Last December, the Mariners selected Schugel when he was waived by the Diamondbacks, but they let him go just a month later in order to make room for starter Joe Wieland. The 27-year-old was an Angels draft selection before Dipoto’s watch and traded to Arizona in 2013 as part of the deal that sent former Mariner Mark Trumbo to the Diamondbacks.

Schugel has done well as a middle reliever with Pittsburgh this season. To date, the right-hander has recorded a fielding independent pitching (FIP) of 3.02, while holding opponents to a .221 batting average. The rookie has also proven that he can go more than an inning — he has seven appearances of two or more innings.  Whether the Pirates will be in a hurry to deal Schugel is debatable. He’s under team control through the 2021 season and the club hasn’t waved the white flag just yet.

Daniel Hudson, RP — Arizona Diamondbacks
When Dipoto was interim general manager in Arizona in 2010, he acquired Hudson from the Chicago White Sox. Still with Arizona, the 29-year-old is set to be a free agent at the end of the season and serving as setup man to closer Brad Ziegler. Hudson held opposing hitters to a .130 batting average during his first 30 appearances this season, although he’s stumbled recently, allowing two or more runs in four of his last six outings. Currently on bereavement leave, the right-hander has expressed a desire to stay with Arizona past this season. Perhaps, seeing the familiar face of the guy who brought him to the Diamondbacks might ease a transition to the Emerald City.

Mike Morin/Cam Bedrosian, RP — Los Angeles Angels
This duo of young right-handers are holdovers from the Dipoto years. Bedrosian was a first-round selection of the previous regime and Morin was a round-13 pick during Dipoto’s first draft with Los Angeles. The 24-year-old Bedrosian has displayed more electric stuff than his teammate, while the 25-year-old Morin has been a versatile performer capable of pitching more than one inning.

Morin is under team control through 2020 and Bedrosian through 2022. Picking up either won’t come as cheaply as a rental. But, considering the lack of depth in the Angels system, moving these young hurlers would present Los Angeles with an opportunity to improve their minor league depth.

Buddy Boshers, RP — Minnesota Twins
After leaving the Angels system after the 2014 season, the southpaw played Independent League ball last season before signing a minor league deal with Minnesota last December. Currently assigned to Class-AAA Rochester, Boshers struck out 14 and walked two during 13 innings of work with the Twins this season. Would he provide an immediate jolt to the Mariners’ bullpen? No. But, adding minor league depth would be a wise choice for a club making a postseason push.

Blaine Boyer, RP — Milwaukee Brewers
The right-hander, who turns 35 next week, is the oldest of the players on my list. The 10-year-veteran has primarily pitched middle relief for the Brewers this year and represents another depth-driven acquisition.

As noted in the Prospect Insider mid-season review of the Mariners’ roster, an area that could potentially plague the club is center field depth. When Leonys Martin spent two weeks on the disabled list earlier in the season, it was painfully evident that Seattle didn’t have a major league ready replacement.

With that in mind, I identified two candidates who could fill in, if needed. Perhaps, Dipoto wouldn’t pull the trigger on either player before the non-waiver deadline. But, both could serve as a low-cost emergency center fielder and defensive replacements in the corner spots.

Kirk Nieuwenhuis, OF — Milwaukee Brewers
The 28-year-old’s association with Dipoto was a brief one in Los Angeles — purchased from the New York Mets, waived a month later, and claimed by the Mets. Nieuwenhuis has primarily played center field for the Brewers this season, but has experience in both corner outfield spots. His batting average is a paltry .216 batting average, but he’s been league-average at getting on base this season. The left-handed hitter is eligible for arbitration for the first time after the season.

Peter Bourjos, OF — Philadelphia Phillies
The right-handed hitter spent the first four years of his career with the Angels, until some guy named Trout took over in center field. In 2013, Dipoto shipped him to the St. Louis Cardinals, who waived him last offseason. Bourjos — a free agent after the season — is slashing a respectable .277/.315/.427 in the City of Brotherly Love. But, that’s the result of a torrid June after struggling during the first two months of the season.

Understandably, my quirky list of trade targets isn’t exactly sexy. Fans would prefer to think about major names, such as Ryan Braun, Carlos Gonzalez, or Andrew Miller. Those kind of players are frequently mentioned during national media speculation surrounding the Mariners. But, those kind of discussions will likely turn out to be nothing more than idle chatter.

I suspect that Dipoto will acquire at least one player similar to those suggested by Churchill, and he’ll add a few smaller pieces — like I’ve suggested. Maybe, he won’t have a shared history with them. But, they’ll be of the same ilk. I’d also expect the Mariners to use Tacoma to fill in any remaining gaps.

This measured approach would permit the Mariners to make a serious run at the postseason, despite having a limited amount of valuable trade chips at their disposal. With that said, breaking up the band in the offseason may be the best course of action for Dipoto, even if he snaps his club’s dreaded 14-year drought.

Follow Luke!
Luke Arkins
Luke is a native New Yorker, who grew up a Mets fan. After the US Navy moved him to the Pacific Northwest in 2009, he decided to make Seattle his home.

In 2014, Luke joined the Prospect Insider team and is now a contributor at HERO Sports also. During baseball season, he can be often found observing the local team at T-Mobile Park.

The Seattle Mariners appear to have righted the ship somewhat after dropping 15 of 21 and for a short time...