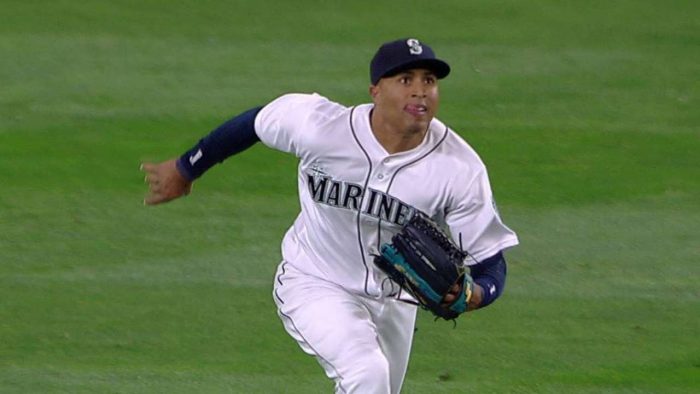 Acquiring center fielder Leonys Martin was the best of the many moves made by Seattle Mariners general manager Jerry Dipoto last offseason. Having said that, should he consider signing his center fielder to a contract extension?

If you simply look at the back of Martin’s baseball card, your gut reaction may be “no.”  After all, he posted a rather pedestrian .247/.306/.378 triple-slash — batting average/on-base percentage/slugging percentage — during his first season in Seattle.

Still, if you recall an era when Mariner center fielders were among the best in baseball, you may place a higher value on elite-level defense — like Martin’s.

A golden glove era
Over the years, Seattle fans have enjoyed watching many defensive stalwarts play center field. Most notably, Hall of Famer Ken Griffey Jr. But, as Mariner fans know, Junior wasn’t been the only wizard to patrol center field.

Mike Cameron — who came from the Cincinnati Reds in exchange from Griffey — was also a defensive stud. Some baseball observers even consider “Cammy” a better defender than Junior. Regardless of who was tops, both players were among the best in baseball and they played for the Mariners.

All good things
The first major — and probably best ever — trade made by former general manager Jack Zduriencik was the acquisition of Gutierrez in a three-team deal in late 2008. During the next three seasons, “Guti” continued the long line of Mariner great center fielders and earned the moniker “Death to Flying Things” from the late, great Dave Niehaus.

Then, the bottom fell out.

Seattle’s center field play quickly became a liability after the 2011 season. When you look back at how they ranked defensively from the beginning of the Zduriencik era, it’s not hard to tell when the wheels came off the wagon.

It’s no coincidence that the club’s descent coincided with Gutierrez’s reduced availability due to chronic injuries and illness. Although his acquisition was intended to reverse the club’s negative defensive trend, veteran Austin Jackson didn’t significantly improve the club’s standing.

A new hope
After being a bottom dweller for four consecutive seasons, Seattle’s center field defense ranked number-14 in the majors in 2016 thanks to Martin The Mariners finally had a strong defender patrolling the territory where Junior, Cammy, and Guti once roamed.

Is Martin the best defensive center fielder in baseball? No, but he’s certainly among the league’s elite. In fact, the 28-year-old is a top-10 center fielder, based on defensive runs saved (DRS) since 2014.

For those not familiar with DRS, it quantifies a defensive player’s value by expressing how many runs they saved or lost for their team, compared to the average player at that position. For instance, +10 DRS from a center fielder baseman means he was 10 runs better than the average center fielder. If you want to learn more about DRS, check out this post from FanGraphs.

Don’t forget the arm
An important component of Martin’s game is his strong throwing arm, which produced 25 outfield arm runs saved (rARM) during the same 1,500-inning, three-year criteria used above. In fact, he had the best arm at any outfield position — Yoenis Cespedes (22) being second best. The closest center fielder — Kevin Kiermaier — was 13 runs behind.

For those who aren’t enamored by with defensive metrics and prefer the eyeball test, this video of Martin putouts should satisfy your desire for visual proof of his cannon arm.

Back to that baseball card
Clearly, Martin is an elite-level defender. But, he’s been just below league-average at the plate and his 2016 stats are very similar to the 162-game average of his career numbers. Is this a concern?

Martin is never going to be Mike Trout at the plate. But, from the Mariners’ perspective, he doesn’t need to be. Remember, they were looking for an elite defender to roam spacious Safeco Field. Offense was considered secondary.

At the time of Martin’s acquisition, Dipoto acknowledged as much to Bob Dutton of the Tacoma News Tribune that the left-handed hitter was “one of the premier defensive center fielders in baseball” destined for the bottom of the batting order.

The question I posed earlier was whether the Mariners should consider extending Martin — a defensively-gifted center fielder with a slightly below-average bat. The answer likely depends on the club’s available options.

The usual suspects
Since free agency is the quickest way to find help, let’s quickly look at potential free agent options during the next few years.

A name like Ian Desmond sounds enticing. But, the Texas Rangers will probably offer him the $17.2 million dollar qualifying offer (QO). Assuming the QO rules remain relatively the same in the new collective bargaining agreement, any team signing him would have to forfeit their first round pick in next year’s amateur draft.

Cameron Maybin is another name that may catch the eye of fans. The Detroit Tigers hold a $9 million dollar option for the 10-year veteran, but Anthony Fenech of the Detroit Free Press noted the club is looking to pare payroll. So, it’s possible the Tigers will either buyout Maybin or pick up his option and trade him away.

It’s true that Maybin’s career offensive numbers are better than Martin’s. But, his -25 DRS over the past three seasons means the Mariners would be facing a significant decline on the defensive front.  Plus, he’s two years older than Martin.

That’s the case with all of the remaining candidates — including Jon Jay. They’re older and/or represent a step backwards defensively. Would the Mariners be willing to accept below average defense in center field again?

As the current market stands, Martin appears to be the best answer for Seattle.

About that extension
The most obvious reason to ink Martin to an extension is financial. According to the MLB Trade Rumors, he’s projected to earn $6.3 million in arbitration — over a $2 million pay raise. For such an agreement to occur, it has to make sense to both player and team though.

From Seattle’s perspective, a deal helps control Martin’s salary for his final two years of his arbitration eligibility.  The upside of a two-year deal for Martin is the guaranteed contract. If you’re wondering why that’s important to a player, simple answer is security.

Let’s say Martin suffers a significant injury next year. The Mariners could non-tender him and owe him nothing. That’s exactly the fate that may await injured reliever Charlie Furbush, who is in his last year of arbitration eligibility and out for the 2017 season with a shoulder injury.

Although unlikely, the Mariners could non-tender Martin after next season if they believed his 2017 performance didn’t justify the money he’d earn in arbitration. Another Mariner reliever — Tom Wilhelmsen — may face that scenario. The “Bartender” is projected to earn $3.8 million in arbitration, which is just $200 thousand less than former closer Steve Cishek. That’s a lot of money for a pitcher who may not fit prominently into the team’s 2017 plans.

Considering the current state of the center field market, signing Martin to a two-year deal would be beneficial to both sides, if they can agree to terms.

And a longer contract?

That likely depends on how the Mariners view their prospect pipeline.

Down on the farm
When Martin is eligible for free agency after the 2018 season. the Mariners may have other options that don’t exist right now. There are two players currently on the 40-man roster — Guillermo Heredia and Ben Gamel, plus Boog Powell, Braden Bishop, and Brayan Hernandez at various levels of their minor league system.

It’s possible Seattle will prefer to take a wait and see approach rather than commit long-term to Martin. When he’s eligible for free agency, the players I just mentioned will have several distinct advantages over him. They’ll be younger, cheaper, and under team control for many years. The challenge for the Mariners is whether any of these five players can become their everyday center fielder.

There’s no doubt that Heredia can field the center field position, but it’s too early to tell about his hit tool. Right now, he projects as a fourth outfielder or a platoon player. The same applies to Gamel.

Powell was slashing .270/.326/.359 at Class-AAA Tacoma until he was suspended for 80 games for using performance enhancing drug (PED) in late June. His suspension — the second in his five-year career — runs into the beginning of next season.

How Powell is viewed by the organization is unknown. But, we may have gotten a hint a month prior to his suspension. When Martin was sidelined with a strained hamstring, Powell seemed like the natural choice to substitute on a short-term basis. Instead of recalling the 23-year-old, the Mariners opted to use Nori Aoki in center field during Martin’s two-week absence.

Bishop — a former University of Washington Husky — has the physical tools to play center field. He finished the year at Advanced-A Bakersfield and isn’t likely to be ready sooner than the 2019 season. Just like Bishop, Hernandez is years away. The 19-year-old ended 2016 in the Arizona League and projects to arrive to the majors no earlier than 2020.

Finally
The Mariners may prefer to deal with Martin one year at a time. Or, they could strike a two-year extension deal, assuming both parties could find common ground. With that said, going past the 2018 season doesn’t necessarily make sense from a financial or baseball perspective.

Entering the 2019 season, the salaries of three players — Felix Hernandez, Robinson Cano, Kyle Seager — will total $71.36 million and James Paxton and Taijuan Walker will be arbitration eligible. Assuming both players are still with the club and living up to their potential — two big ifs, I know — their combined earnings could top $15 million.

That’s a big commitment to five players. Letting Martin walk and finding a more affordable option, either internally or on the trade market, may be more palatable to the Mariners.

From the baseball side, Martin will be age-30 going into the 2019 season. How far into a center fielder’s thirties should a club be willing to commit? What if the Mariners had struck a long-term deal with a 27-year-old Franklin Gutierrez after his 2010 Gold Glove season? How would that be viewed now?

Guti’s situation was a near worst case scenario. But, his unfortunate circumstances and the puzzling declines of Austin Jackson and Andrew McCutchen at age-30 are a warning that a center fielder on the wrong side of 30 may already be in decline.

Regardless of the course taken by the Mariners, I suggest savoring the play of one of the elite center fielders in baseball. Hopefully, Leonys Martin is the first in a new wave of outstanding Seattle center fielders because the alternative isn’t very appealing.

Or conducive to winning baseball.