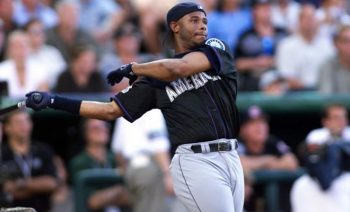 Seattle loves Ken Griffey, Jr. and it’s no secret why. He was a tremendous baseball talent, the once-in-a-generation type. He made incredible plays and ran off the field grinning ear to ear. He hit majestic home runs and owned the New York Yankees. He hit homers in eight straight games and raced home on Edgar’s Double. He had the swagger. He had the swing. He was The Kid. He was The Natural.

Not everyone kept loving Griffey, however. He bulldozed his way out of town after the 1999 season in childish, Mariners-hating fashion, pigeonholing the franchise he now speaks so highly of into trading him to Cincinnati so he could be be ‘home.’ This stuck in the craw of some. Not all, but some. Griffey then returned to Seattle, only to quit on the team in the middle of his second season. This also stuck in the craw of some.

I am one of those.

I was 15 years old when Griffey lit up the Cactus League and gave the Seattle Mariners no choice but to bring him north as their everyday centerfielder. I bought the baseball cards, the candy bars, I wore my hat backwards and I never, ever missed a plate appearance. I probably saw each of his home runs twice. Once live, once on Sportscenter.

No matter what I was doing, I found a way to see Griffey swing it each and every time. Griffey’s swing became such a frequent event it became somewhat predictable he’d go deep. One could tell by watching the pitcher warm up whether or not Griffey was going to be able to time it. Usually he did.

I loved Griffey just like everyone else. But he slugged me in the stomach in 1999 and that was that. I was done. Then kicked me when I was down in 2010.

Since then I’ve been indifferent on Griffey, even leaning on the side of dislike. He was a great player, but I was done. He’d taken advantage of Seattle twice, shown he didn’t really care about the city and its fans … twice. It wasn’t right between the former superstar, at least not with me.

I never thought Griffey was a bad person. I’d simply lost my ‘Rushmore’ place for him after what could only be construed as selfish acts with little to no regard for those who adored him. All that’s gone now.

Junior called Cincinnati ‘home’ in 1999. He’s since acknowledged on numerous occasions Seattle was his baseball home, something his dad told him years before.

I think Junior’s home now. Cooperstown, New York, where the legends of the game will live forever. And if you ask me, there’s never been a better player.

We can be friends now.