There’s no argument here, but that doesn’t mean several talents don’t deserve similar recognition, but it truly was a banner year down on the farm for the Seatte Mariners — and it’s been awhile since that could be said with any confidence whatsoever.

I’ve been at this 17 years now and this was, by far, the most effective player development season yet, and it’s the best the farm system has looked in that span, too.

While it wasn’t difficult to derive this year’s position prospect of the year, it was difficult to leave out a few names … so I won’t do that.

Kelenic began the year as a 19-year-old in Class-A West Virginia of the South Atlantic League. He had 251 professional plate appearances when the season started and now might not be much more than 251 plate appearances from the big leagues.

Kelenic’s time in Modesto was challenging. He missed some time with minor injuries, interrupting his timing at the plate somewhat, but he still managed a 129 wRC+ and a .290/.353/.485 line in 46 games. There’s wasn’t a dominant phase with the Nuts for Kelenic, but he rebounded every time there was signs of a slump, and finished strong there through August 9.

At times, Kelenic was just a good hitter in Modesto. He struggled a bit, getting caught looking for breaking balls and perhaps being a bit too picky, but had six multihit games in his last seven full contests before being promoted, including two three-hit efforts.

The most important thing Kelenic did in Modesto was prove he could hit good velocity (saw him hit a couple opf 94s to the wall and a long ball on a 96 mph fastball on 1-2 count), and not let slumps get him out of his good habits at the plate.

In his short time in Double-A he’s proven he belongs and that he can handle these jumps. He turned 20 while playing in the California League but might not be 21 when he hits the majors next season. I wouldn’t bet on that, but I wouldn’t wager against it, either.

He’s a 55 runner with very good defensive instincts and has at least 60-grade arm strength tha plays in the corners and serves him well in center. He’s a good baserunner who reads pitchers pretty well and could end up a 15-bags per year base stealer early in his career.

Coming into 2019, most underrated Kelenic’s power. I believe most other outlets handed Kelenic average power grades, but the day after the Mariners made the trade with the New York Mets, two scouts were adamant it was 60 or better, and his hit tool helps the probability in the power and for me upgrades it, too.

There’s natural loft in the swing, above-average bat speed and good barrel ability all over the strike zone. He hit 23 homers in 117 games and 443 at-bats this season, despite not spending a day in a league where the home run rates skyrocketed for any reason.

I fully expect a career-level Kelenic to hit for average — at least .270 when league average is around .250 and as high as the low .300s — get on base and hit for power, while being above-average defensively and a value on the bases.

Prime Kelenic might be an MVP candidate with .300/.380/.600 upside in the current environment.  He should make multiple all-star teams and is likely to be a great value for the first several years of his career, including his first ‘stick’ season, which I expect to be 2021 at the latest.

There are areas on which he needs work — improved contact at the top of the zone, tighten up the zone control and avoid chasing (always a thing, even for elite talents and even major leaguers) and finding more contact and success versus left-handed pitching (which he did in Modesto and Arkansas), but this a King Felix-style prospect situation.

Quoting a long-time scout when I asked in 2004 if he’d seen Felix recently: “There’s nothing else to see. Just give him water and watch him grow.”

The same can be said for Kelenic.

It was just 15 months ago the Mets made Kelenic the No. 6 pick in the 2018 MLB Draft — behind Jonathan India (Reds), Nick Madrigal (CWS), Alec Bohm (Philly), Joey Bart (SF) and Casey Mize (Tigers). He was the first prep player selected that year, despite being from a town without a lot of baseball in Waukesha, Wiscosnin.

Kelenic is likely to beat most of the 2018 draft class — college players, too — to the majors, at least at his current developmental pace, and might beat one or twoMarine of the players selected ahead of him to the bigs, too.

As loaded as the Mariners organization is right now, particularly with prospects that performed well in 2019, no player did more this season than Kelenic.

1. Got to power naturally
2. Hit the ball hard to all fields
3. Closed a hole down and away 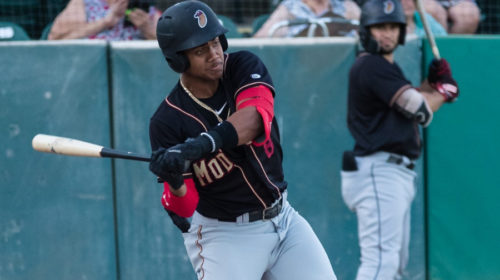 Offensively, Rodriguez has an edge in upside over Kelenic and is no slouch in other facets of the game. He, too, accomplished a ton in 2019, performing well in the Sally League and in a short stint terrorizing the California League.

Despite losing two months to injury, Rodriguez still lands here just behind Kelenic. A full season and this is a toss-up.

The power is plus, perhaps beyond, and the 18-year-old has shown an advanced feel for hitting since Day 1 in pro ball. He’s cut time off his MLB ETA, too, after I began the year with ‘mid-2022 stick’ next to his name on my whiteboard. He’s now firmly in the 2021 column for me, albeit likely later in the season than some of the older, more experienced players also projected for 2021 (as their stick year), including Cal Raleigh and a group of arms.

1. Used the field consistently, avoiding a pull-happy, power-focused game plan
2. Cleaned up the swing path, is now more direct to the ball

Fraley made some swing changes in 2018, the Mariners noticed and continued to help the LSU product take advantage of his physical skills, including good bat speed, and he went from four home runs in 2018 (a career high at the time), to 19 in 2019. It’s worth noting while Fraley did hit eight homers in the ball-infected PCL, he also hit 11 in 382 at-bats in Double-A where the ball is ‘normal.’

He’s at least a 55 defender in center and his arm strength has improved the past year, too, perhaps getting him closer to average ranges.

Despite the power uptick, Fraley remains a hitter more than a power hitter, but he now possesses the ability to reach the gaps with relative ease and he creates enough backspin to hit 12-15 homers in the majors in a full-time role. This is espcially noteworthy since only six players in all of Major League Baseball that have 500 or more plate appearances this season have hit fewer than 10 homers, and just seven have slugged under .400. In this climate, regulars have to hit for some power. Fraley is equipped to do that.

He’s a tough player, will get dirty and is athletic on the bases, too.

While the scouting report still suggests Fraley is likely to me more an extra outfielder, he has a chance to play a lot and when the season started, there weren’t many believers in that theory.

1. Contact versus LHP
2. Finding his two-strike swing vs MLB pitching

Cal Raleigh, C: Raleigh did exactly what clubs should hope a college player drafted in the top few rounds does in his first full season in pro ball, which is prove they were correct in taking him that high by performing in Advanced-A ball. Raleigh took it a little further by showing well at times in Arkansas, and proving he can catch. I think those questions are mostly answered at this point, but to what level remains to be seen. What goes unnoticed but shouldn’t is Raleigh’s work with top arms Logan Gilbert, Justin Dunn, Ljay Newsome, Ricardo Sanchez, Justus Sheffield and a slew of quality relievers, both in terms of his abilities, but the experience with good stuff, and specifically with some arms he will catch in the majors in a few years.

Noelvi Marte, SS: Marte showed his physical gifts are more than that by flashing average or better hit and power tools. He’s probably going to end up at third (40%), second (25%) or in center (20%), but the error total isn’t anything at all to worry about at this stage. Bat speed, barrel prowess, and the baseball skills are just beginning to match the physical abilities. There’s all-star upside here, Adam Jones style.

Evan White, 1B: White did a terrific job getting to his 55-grade raw pull power in 2019 without selling out for it. He might be the best defensive first baseman on the planet and despite just two stolen bases, could be one of the best five athletes and one of the five fastest runners in the entire farm system. I’m wondering what the power upside is here, but White took a step forward in 2019.